Cat Comes Out of Her Shell Knowing Her Kittens are in Great Hands, She Turns into Fluffy Big Hugger

A cat came out of her shell knowing her kittens were in great hands. She turned into a fluffy big hugger.

Estee the cat and her kittensBest Friends Felines

A very shy cat was brought into Best Friends Felines, a cat rescue in Brisbane, AU. She was heavily pregnant, scared, and wouldn’t let anyone approach her.

With time and patience, the cat named Estee slowly warmed up to the idea of touch. “Once she did, it was clear that she loved pats as she would purr, knead and dribble as she pushed her head into my hand. However, she would only allow pats when she was up high (her safe place),” Best Friends Felines shared. 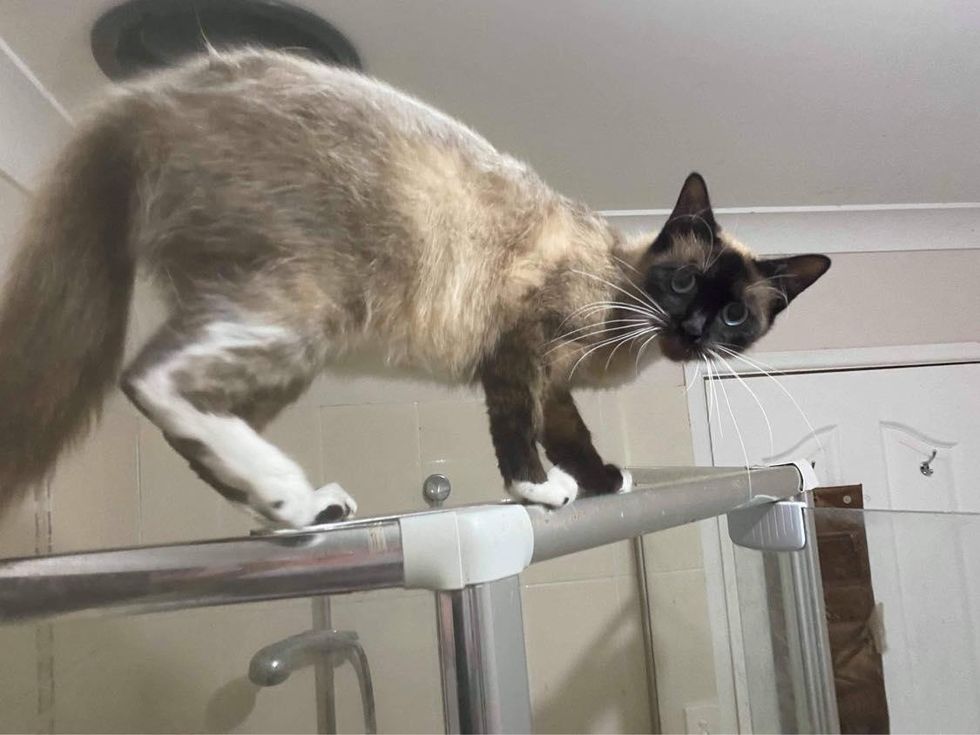 Estee went into labor on top of the bathroom vanity on a Tuesday. She didn’t let anyone move her four kittens into a comfortable nursery. Her foster carer stayed close to make sure that they were safe, while working on a plan to get them onto ground level.

They placed a makeshift nest next to the vanity, and eventually got the family of five into a better suited area. 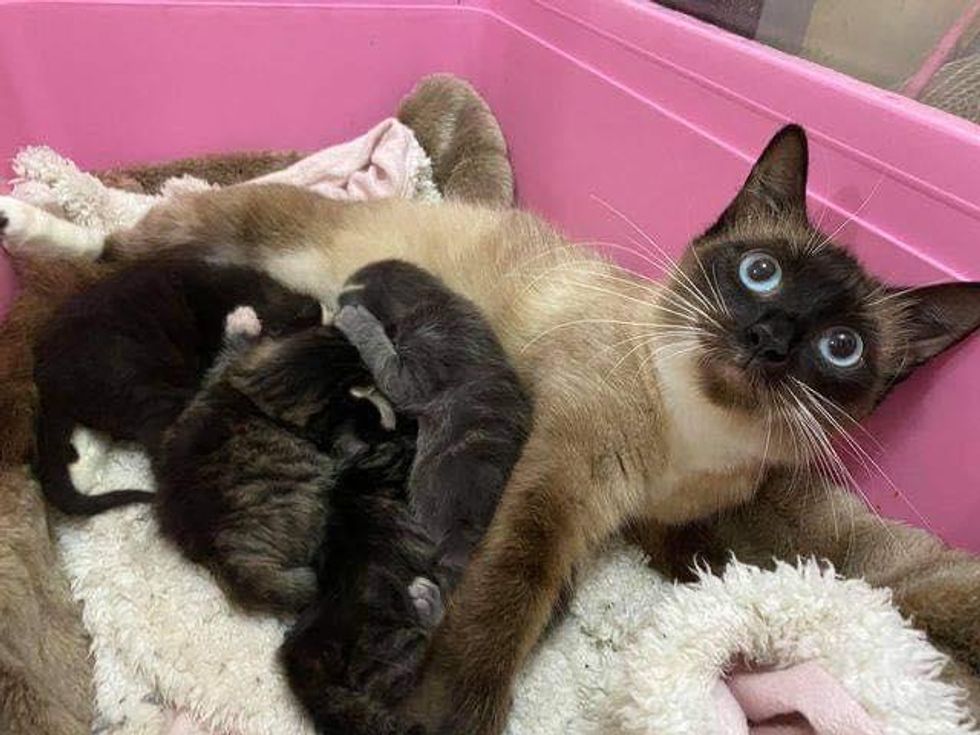 “She was very protective of her babies. As soon as my hand got close to them, she would hiss and stomp at me,” Best Friends Felines wrote.

“Over a couple of days, she relaxed enough that she would allow me to hold a plate up to her so she could eat, and while she was distracted, I would gently touch the babies. Slowly she realized she trusted me enough and that I wasn’t going to hurt them.” 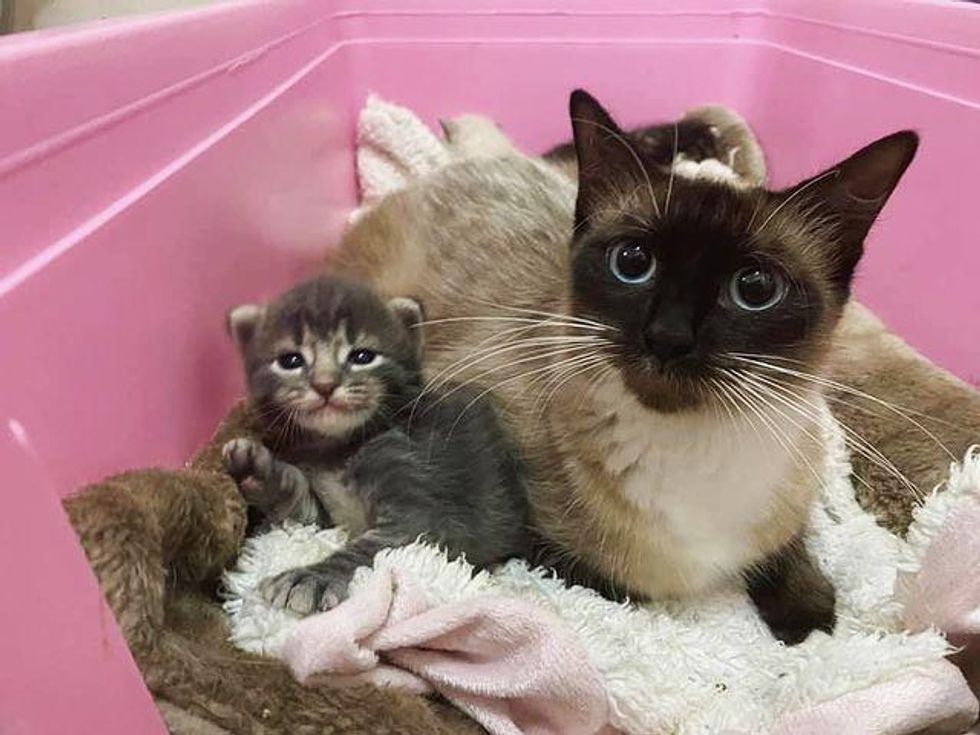 Over time, Mama Estee became more comfortable and was no longer afraid of raising her kittens on ground level, in the comfort of the nursery. She was also content to let her people handle her babies.

“I cannot believe the change in Estee over those couple of weeks. She’s gone from a cat who wouldn’t allow you to touch her to a cat that demands smooches and pats when she sees you.” 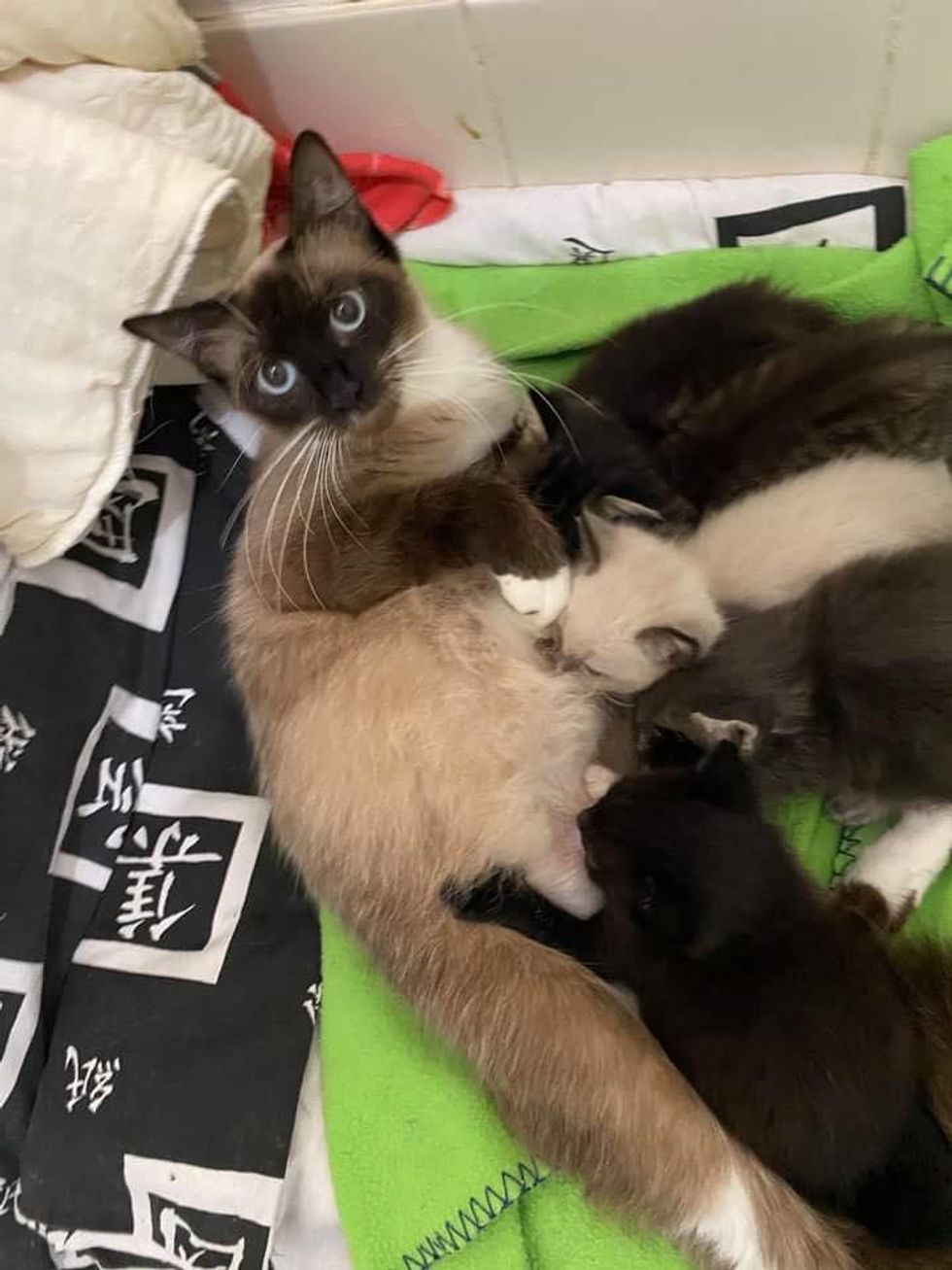 “Every day, she trusted more and was allowing me to hold her for longer each time.”

Besides raising her litter of four, Estee accepted an orphaned baby and cared for him as her own. “She was a super dedicated mother, and was growing in confidence even more every day.” 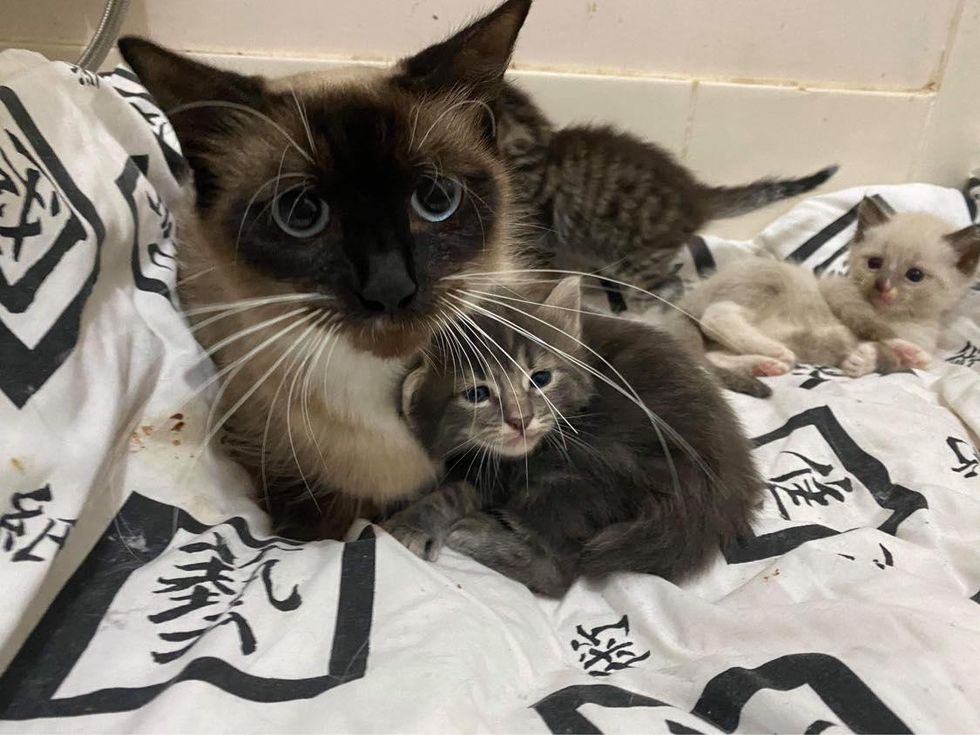 By the time the kittens were big enough for adoption, Estee let them spread their wings, and they went off to their forever homes. Estee was then transferred to another foster volunteer, Kristina, to continue her socialization.

“I was told that she was very scared and needed time and patience. She spent the first few days hiding in a corner and barely ate anything or use the toilet,” Kristina shared with Love Meow. 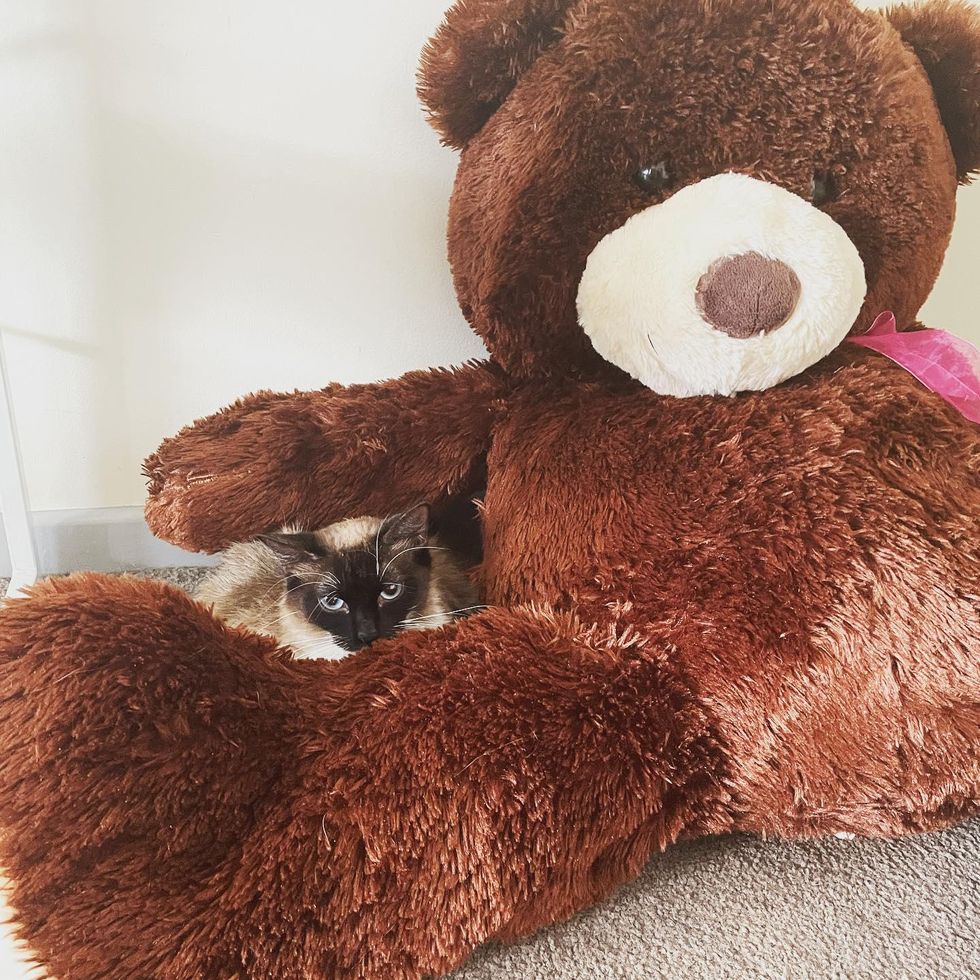 Kristina took an opportunity to help the cat onto her lap to ease her nerves. “She started to knead on me and purr. We continued slowly bonding over the next few weeks. Every day, I could see some improvement.”

After two surgeries to remove all of her teeth due to an advanced dental disease, Estee felt like a new cat and came out of her shell even more. She was grateful to have warm laps to sit on and human moms to keep her constant company. 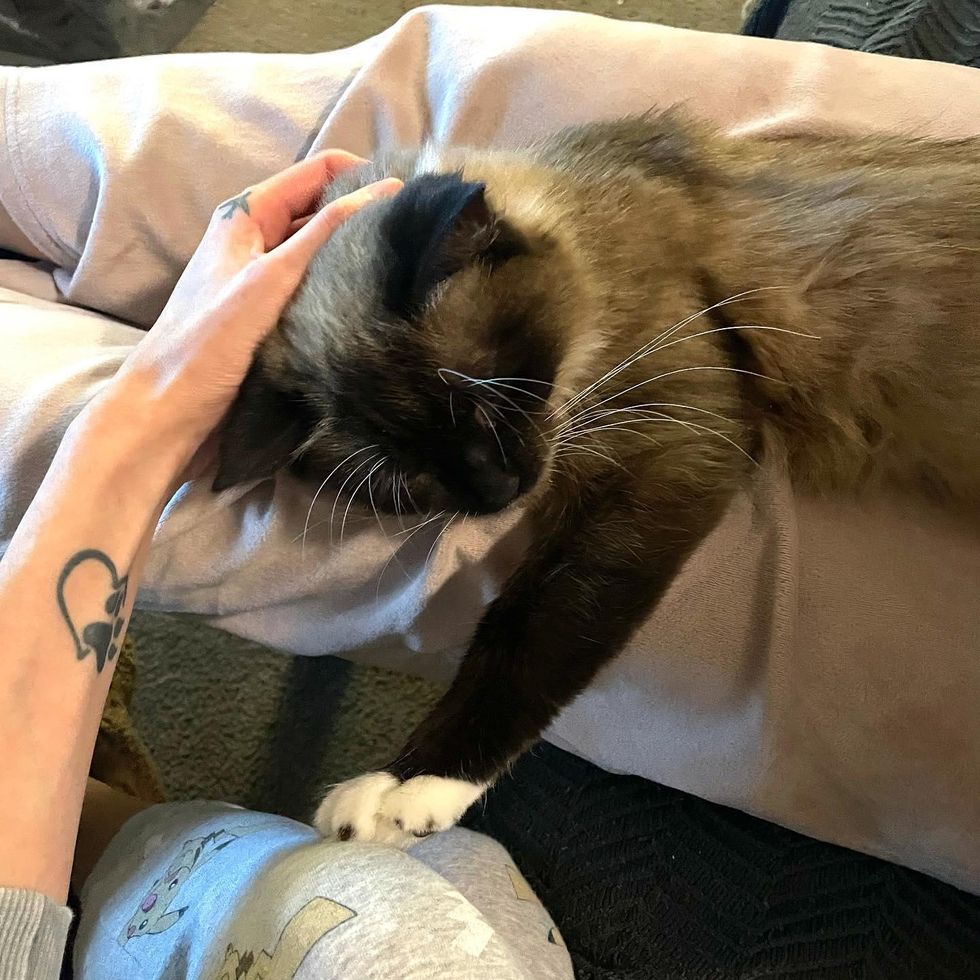 She came out of her shell and started to cuddle@estee_catstar

“I became very attached to her while taking care of her during her recovery. I thought she was the most perfect cat,” Kristina added.

A few months after Estee moved in with her foster mom, she officially became a permanent part of the family. 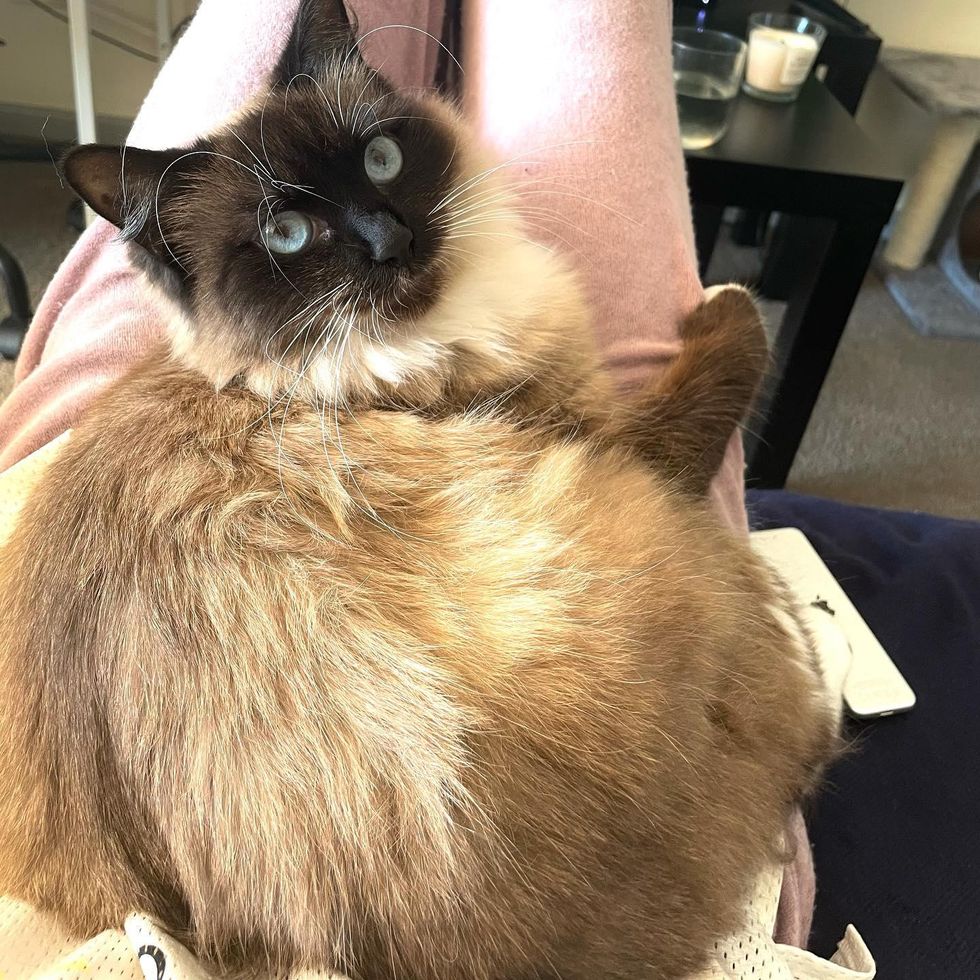 “She is very affectionate, loves to cuddle and being with me at all times. She continues to blossom, and has taken over so many spots and become the queen of the house.” 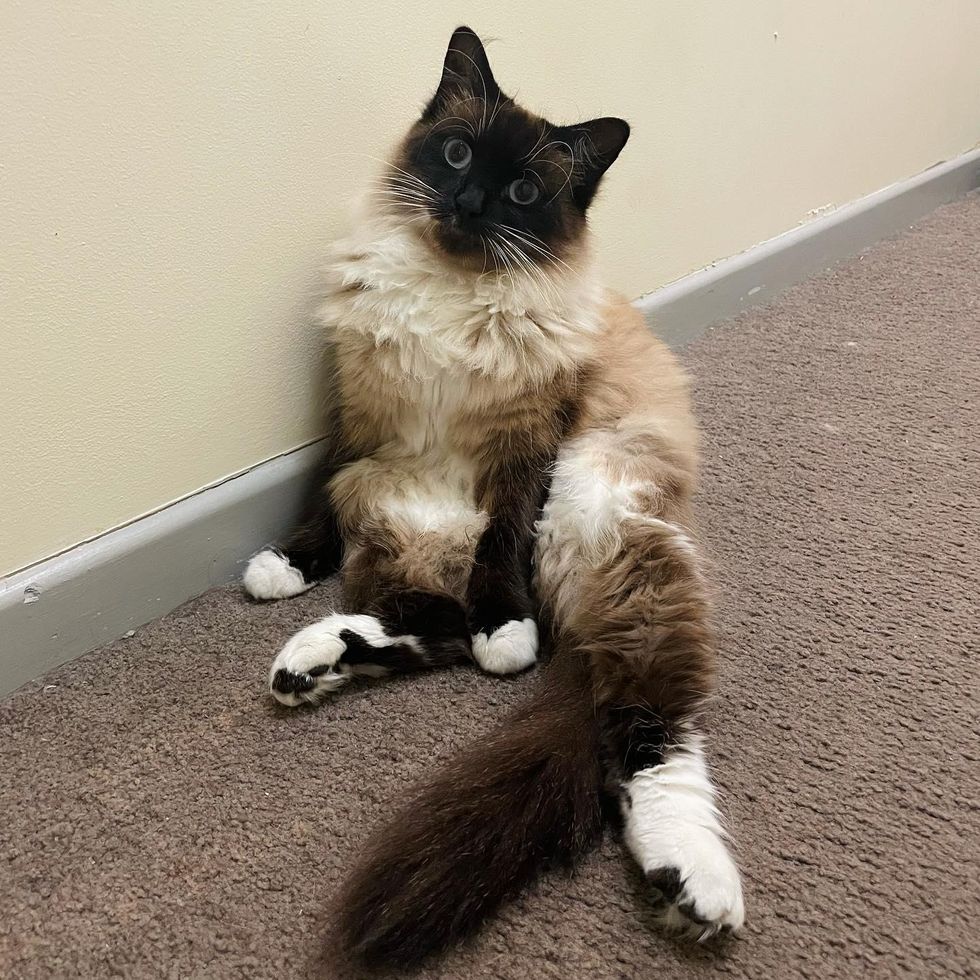 Estee has grown a gorgeous fluffy coat and discovered the fun of zoomies. She’s been helping her now forever mom with foster kitties that come through the door.

She has blossomed into a gorgeous fluffy cat@estee_catstar

With lots of love and patience, Estee, the formerly timid cat, has made a complete 180 and transformed into an affectionate, fluffy cuddle-bug. 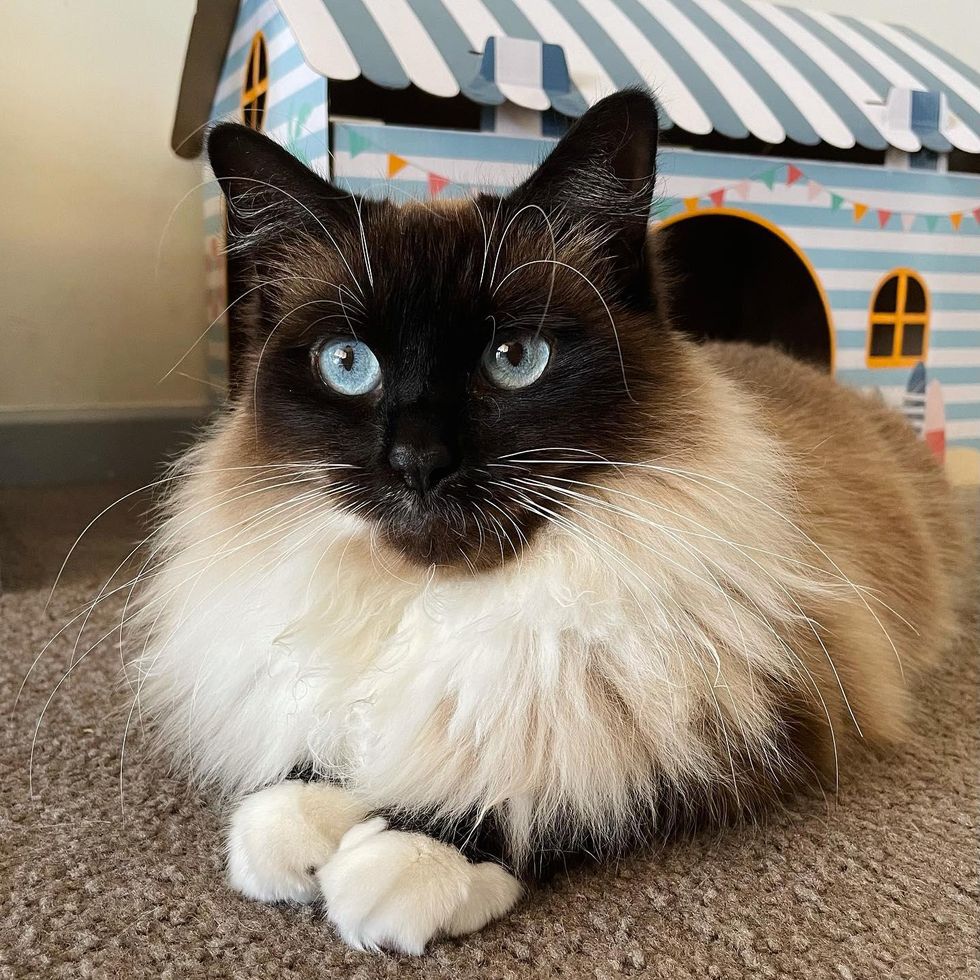 Related story: Cat Waits at the Door with Her Two Kittens as They are Ready to Leave the Streets

Mactavish & Freya: Time for a Game of Tug of War with the Sisal Cat Toy!

Mactavish & Freya: Time for a Game of Tug of War with the Sisal Cat Toy!

Cat Blossoms After She was Rescued at 22 Years Old, Now She Chases the Sun and Hogs the Bed