A family took a kitten into their home, and their bunny decided to make her his best friend.

A grey kitten named Ahsoka crossed paths with an unlikely friend, Echo the bunny, and they have been a bonded pair ever since.

Ahsoka and her sibling were adopted into their new home by Ryanne and Jake Palermo, when they were 12 weeks old. Ahsoka quickly established herself as a cuddle-bug in the family.

A couple of days later, they had a meet-and-greet with the rest of the fur crew, and Echo, the only bunny in the house, commanded their attention. 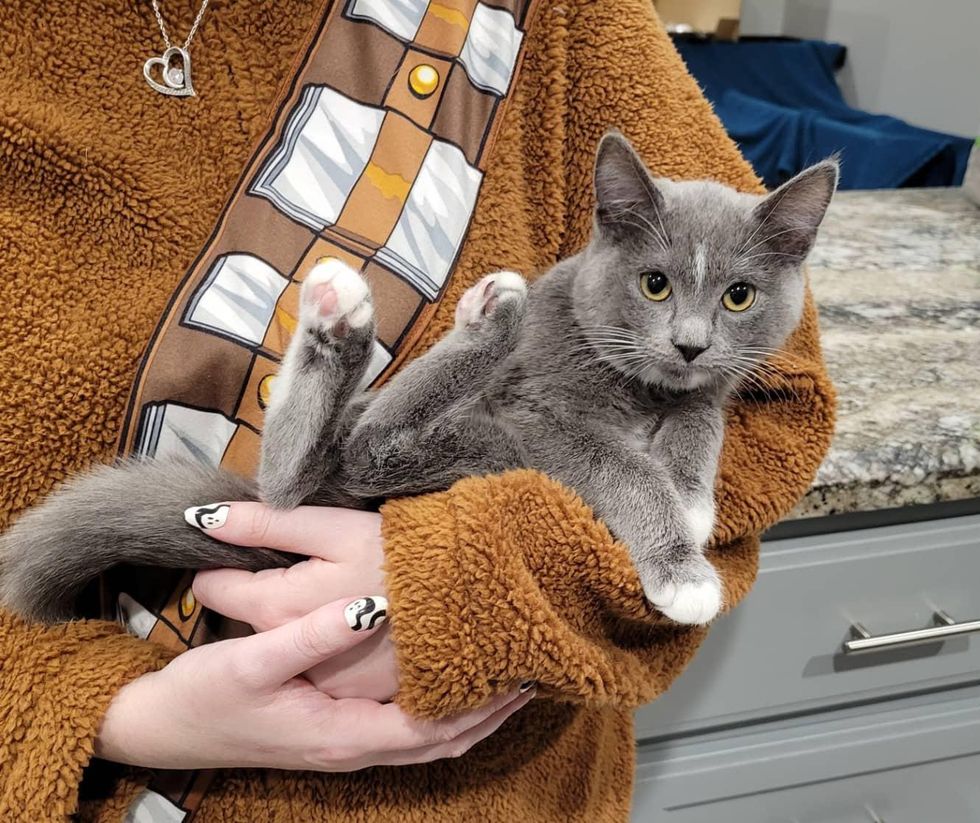 It was love at first sight for little Ahsoka. She gravitated towards Echo, who exuded so much confidence, and watched him attentively until he invited her to play. Despite having other cats in the house, the bunny only extended his invitation to Ahsoka.

Echo, (at the time) being the bigger member of the family, took the kitten under his wing and showed her the ropes. “He is the boss man of the house,” Ryanne shared with Love Meow. 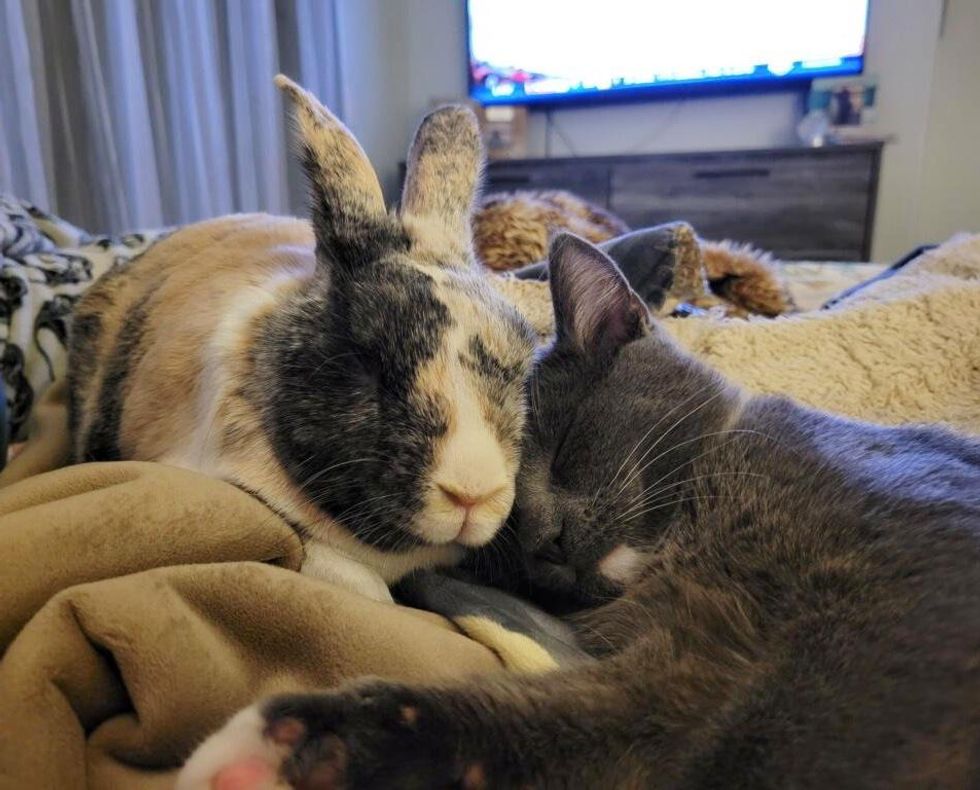 “I think Echo felt protective of Ahsoka. She’s the only one of all the cats he likes, and he liked her from the beginning. He would allow her to sleep in his cage, and many times they end up snuggling in his bed together.”

When Ahsoka suddenly lost her sibling due to health issues, she spent more time with Echo for comfort. They became more bonded than ever. 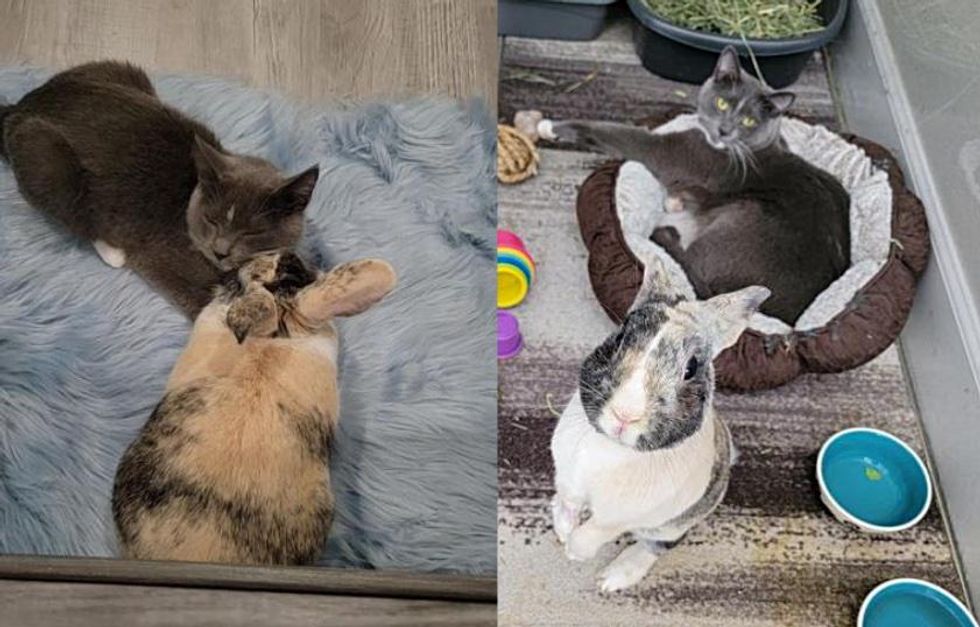 “They are best friends and there’s clear love between them. She loves being in his vicinity, and she’s the only one Echo allows to snuggle with him,” Ryanne told Love Meow.

Ahsoka sometimes wraps her arms around Echo when they nap, and Echo burrows into her fur for warmth. 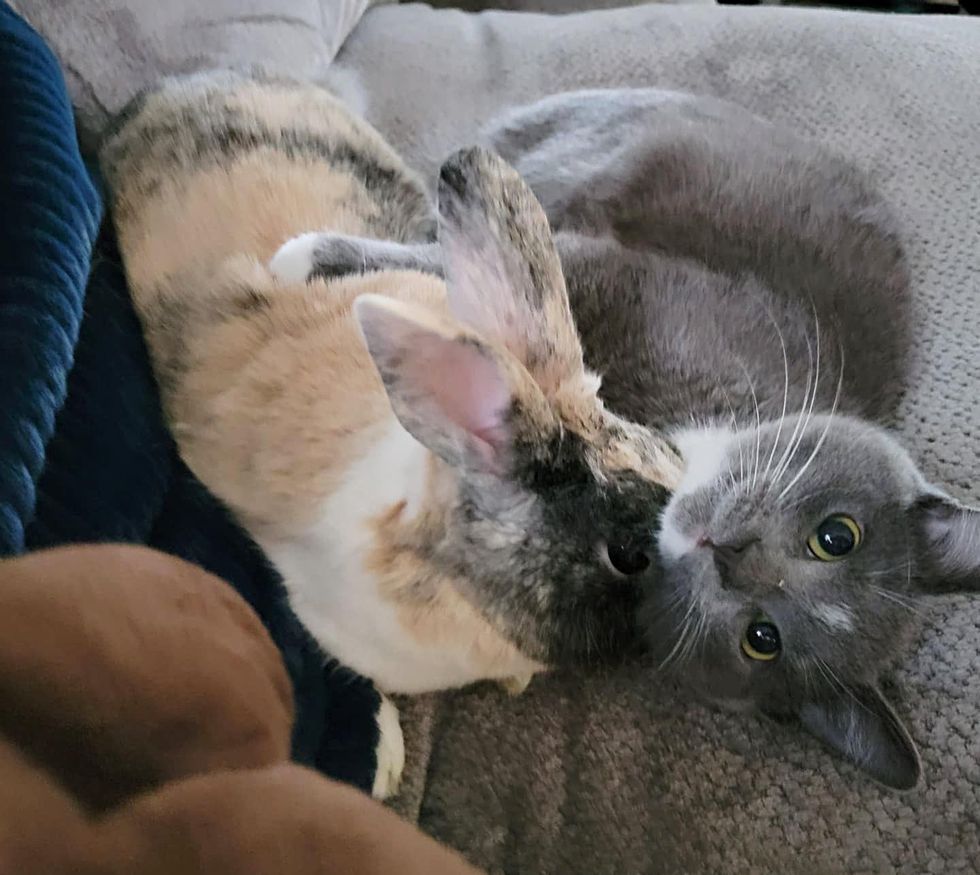 “I sometimes get the vibe that Echo is like a father figure to her, despite the fact now she is much larger than he is,” Ryanne shared with Love Meow.

“They love to sleep side by side or curled up. She also loves to nibble on his ears. It’s gentle and he enjoys it.” 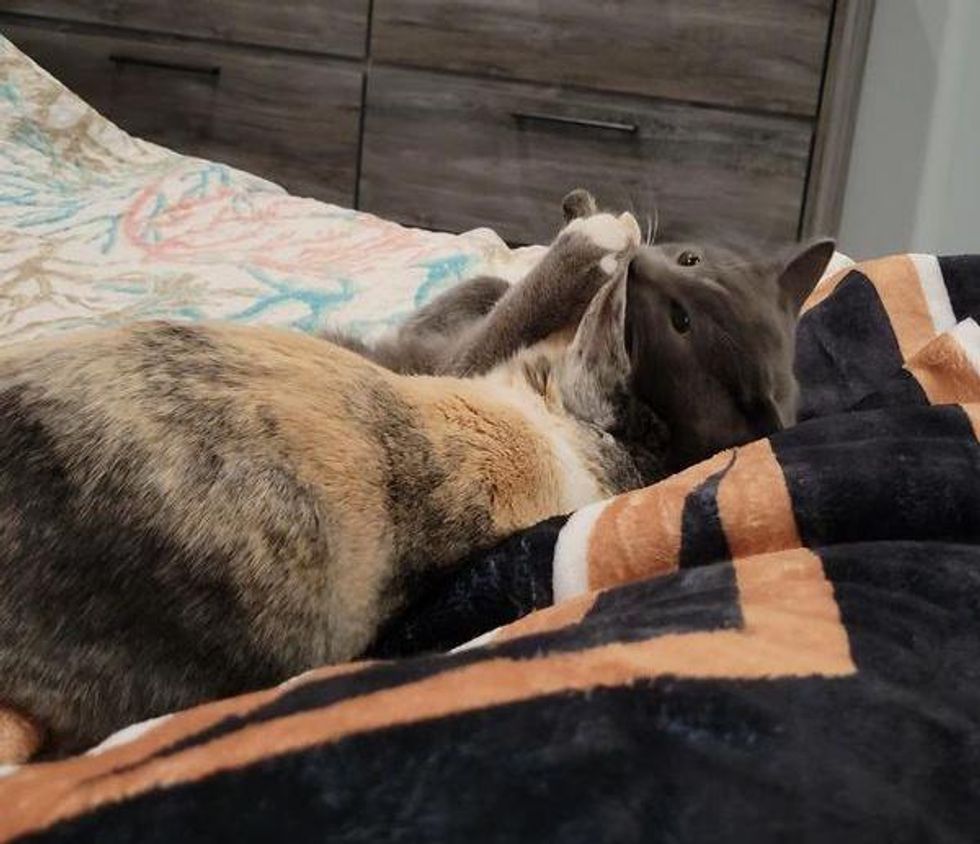 Ahsoka who is on a feline diet, occasionally sneaks a snack from Echo’s bowl as if she were part bunny. Echo doesn’t mind it at all and always enjoys her company. “He lets her share his salad with him.”

They snuggle in their blankets together. Ahsoka is so content when she’s with her best friend. 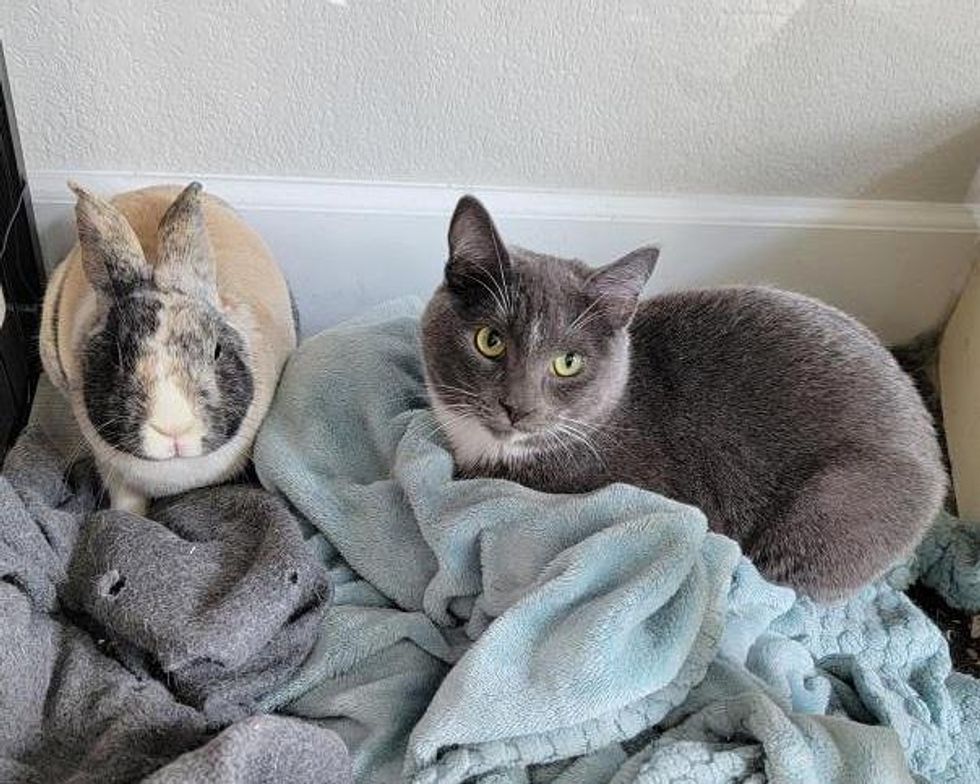 Earlier this week, when Echo had to stay at the vet’s office, Ahsoka slept in his cage the whole night. It was as if she was waiting for Echo to return.

“She was clearly missing him and concerned. Now that he’s back, she keeps following him around the house.” 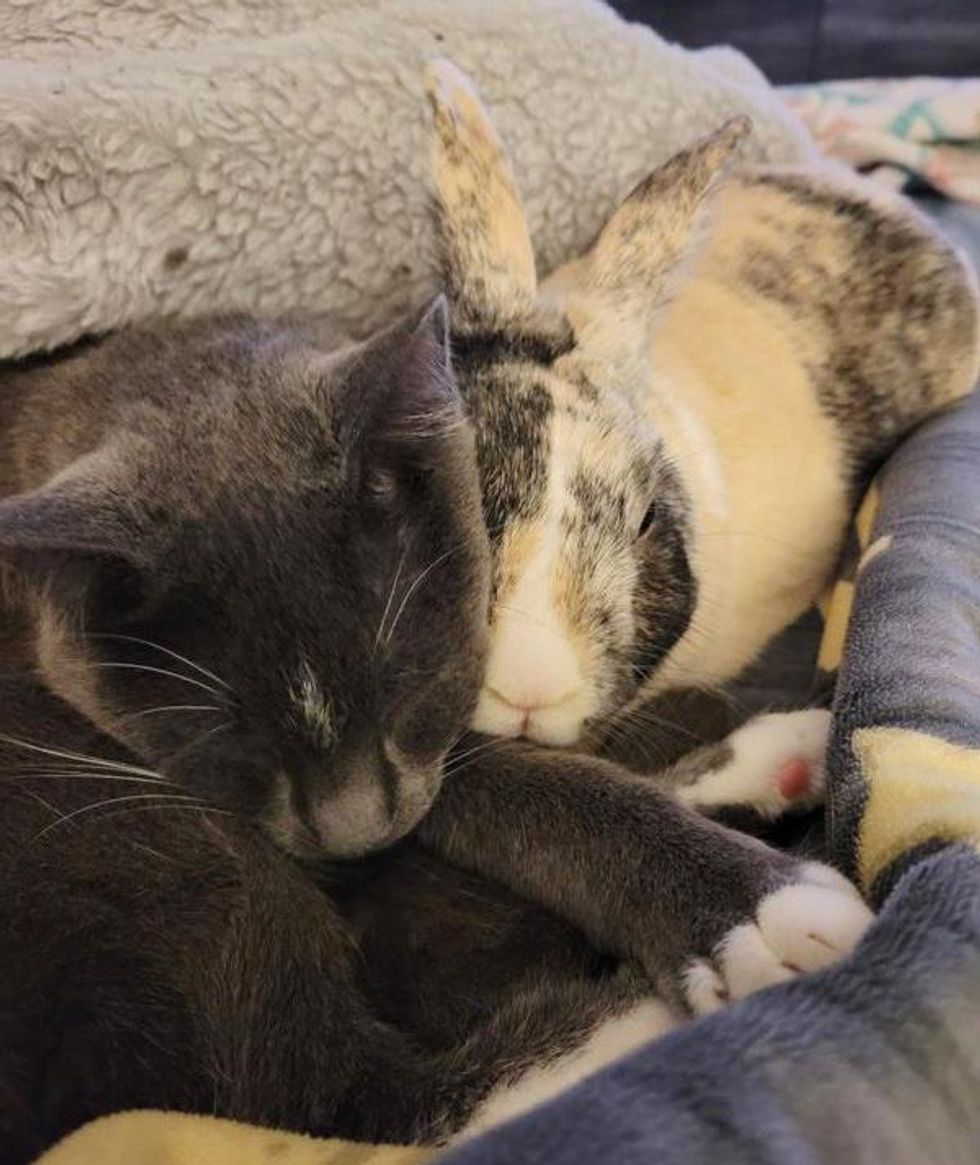 Echo adores his feline friend, and Ahsoka looks up to him. The two share an unbreakable bond and they are constantly snuggling.

If Ryanne and Jake can’t find Ahsoka in their room, she is likely cozying up with Echo in his bed. 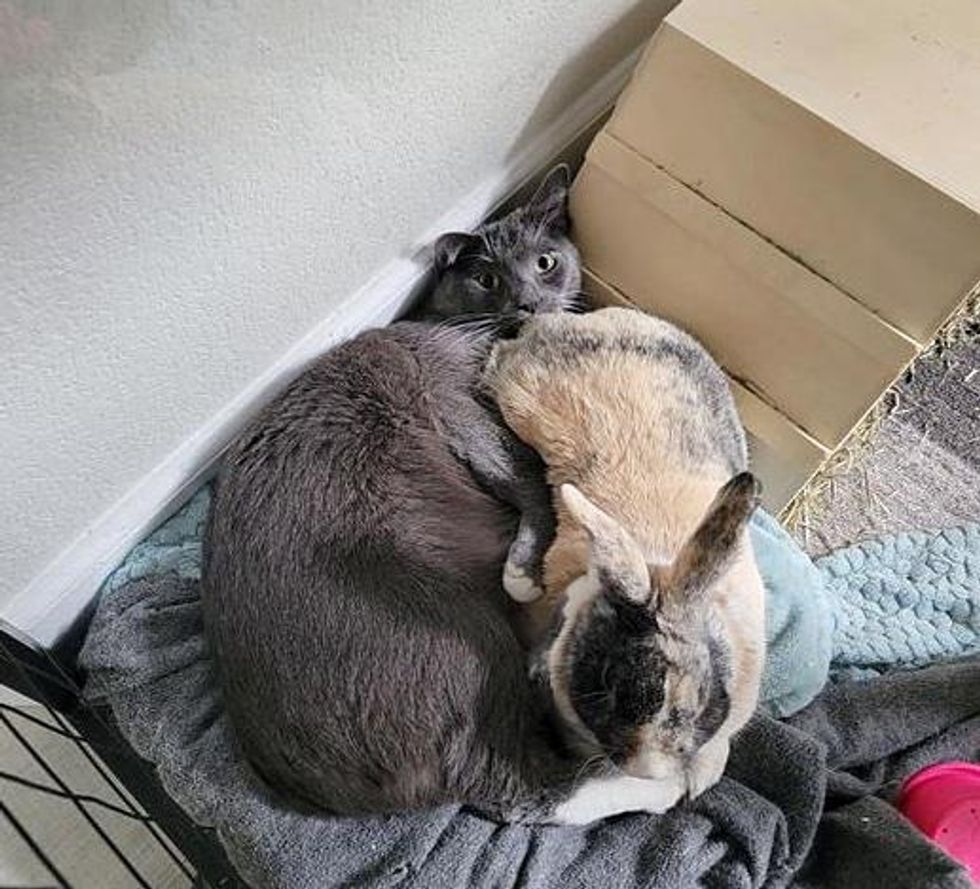 These two have become the sweetest friends despite their differences. Ahsoka is much bigger now but some things never change. 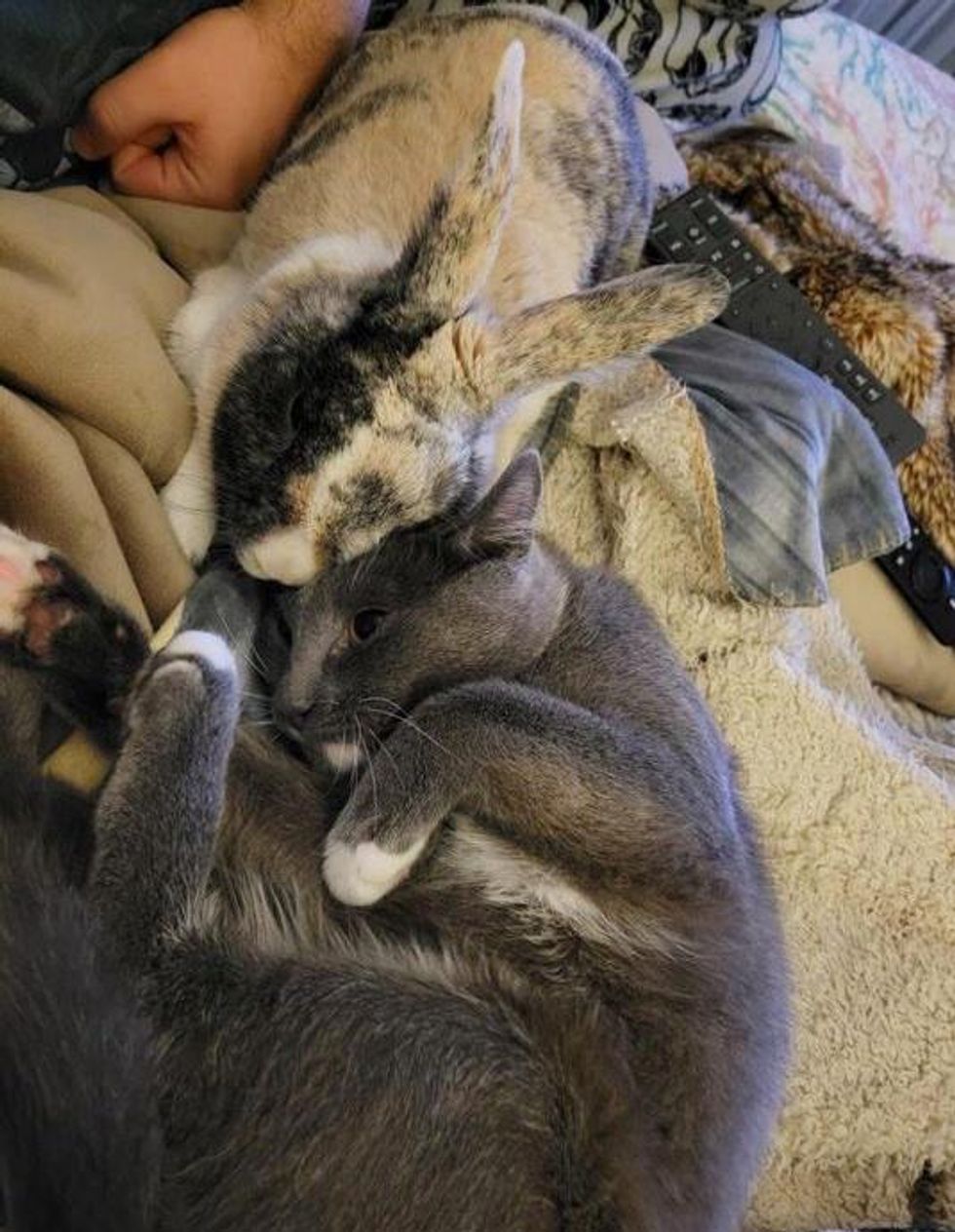 Sight Loss is no Obstacle for Plucky Puss

Sight Loss is no Obstacle for Plucky Puss