Twin Kittens Keep One Another Strong After Being Found as Orphans, and Blossom Together

Twin kittens kept one another strong after being found as orphans, and blossomed together.

The journey of Mac and Cheese, the orange twin kittens, is nothing short of miraculous. Since the day they were found, they have been incredible fighters while keeping each other going strong.

Wrenn Rescues in Southern California was contacted by a fellow rescue about the two kittens. They were the only survivors of their litter, and the mother cat was nowhere to be found.

“They came to us at about a week old and were so small and fragile. They weren’t eating much or maintaining weight very well, and we were worried they were not going to make it,” Erin, a foster volunteer of Wrenn Rescues, shared with Love Meow. 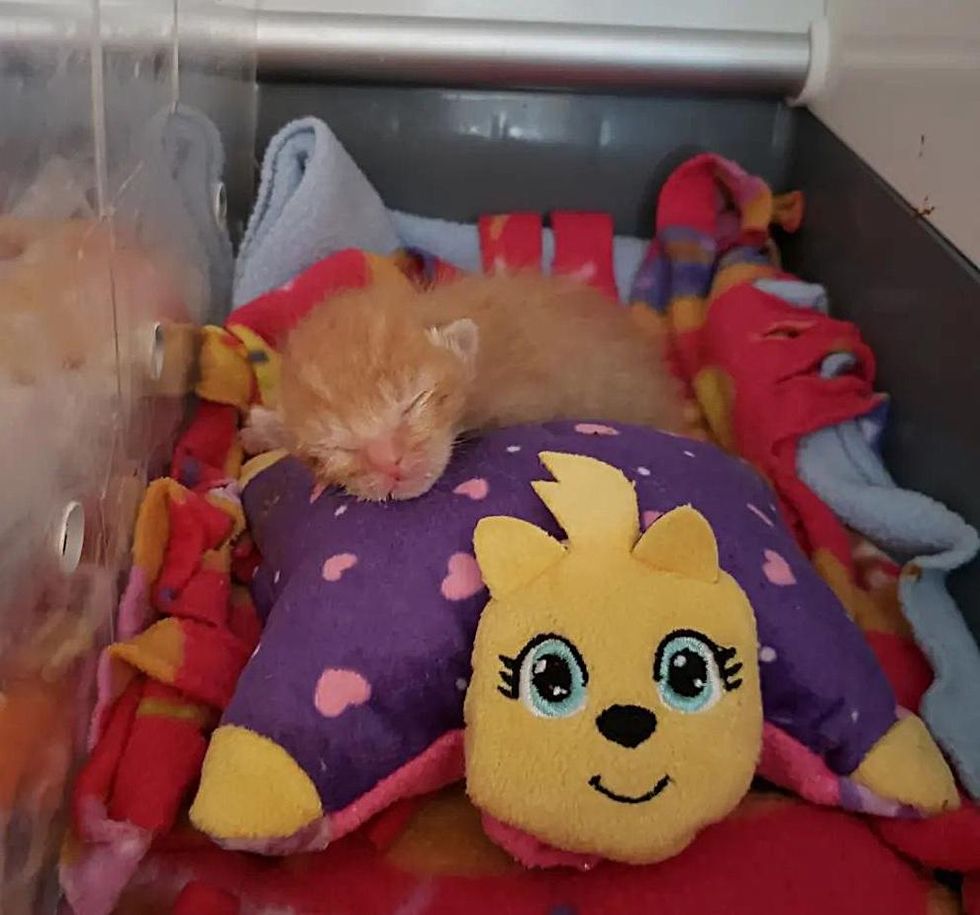 Despite it all, the two were in good spirits and would purr and roll around after each feeding. With frequent small meals around the clock, Mac and Cheese started to perk up.

Both kittens were battling infections and tummy troubles. Cheese was smaller than Mac in size but trying his utmost to keep up in weight. “After about a week, they began making small gains.” 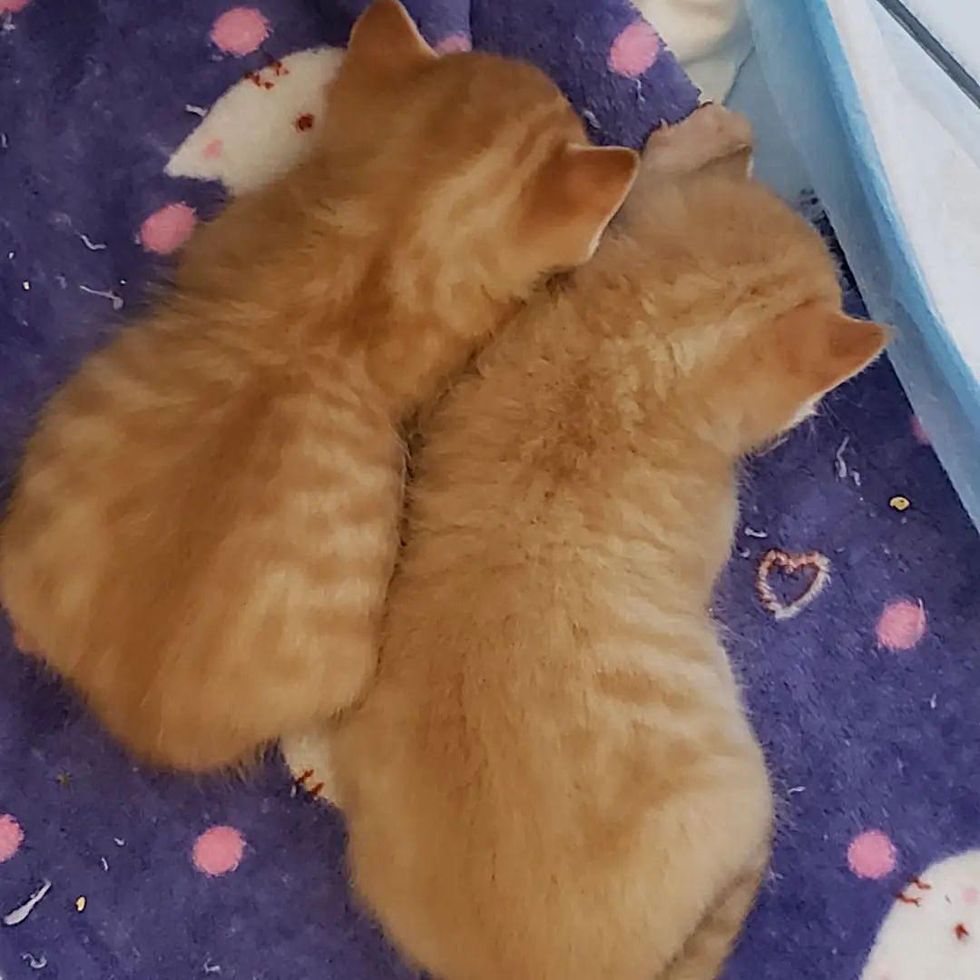 The kittens spent the first two weeks cozying up in an incubator before moving into a spacious kitty suite, where there was plenty of room for them to explore and play.

With a few lingering health issues, they decided to have the pair seen again by the vet. They were shocked to discover that both tabbies had feline panleukopenia, also known as feline distemper. “It was like a gut punch because they were doing so well,” Erin told Love Meow. 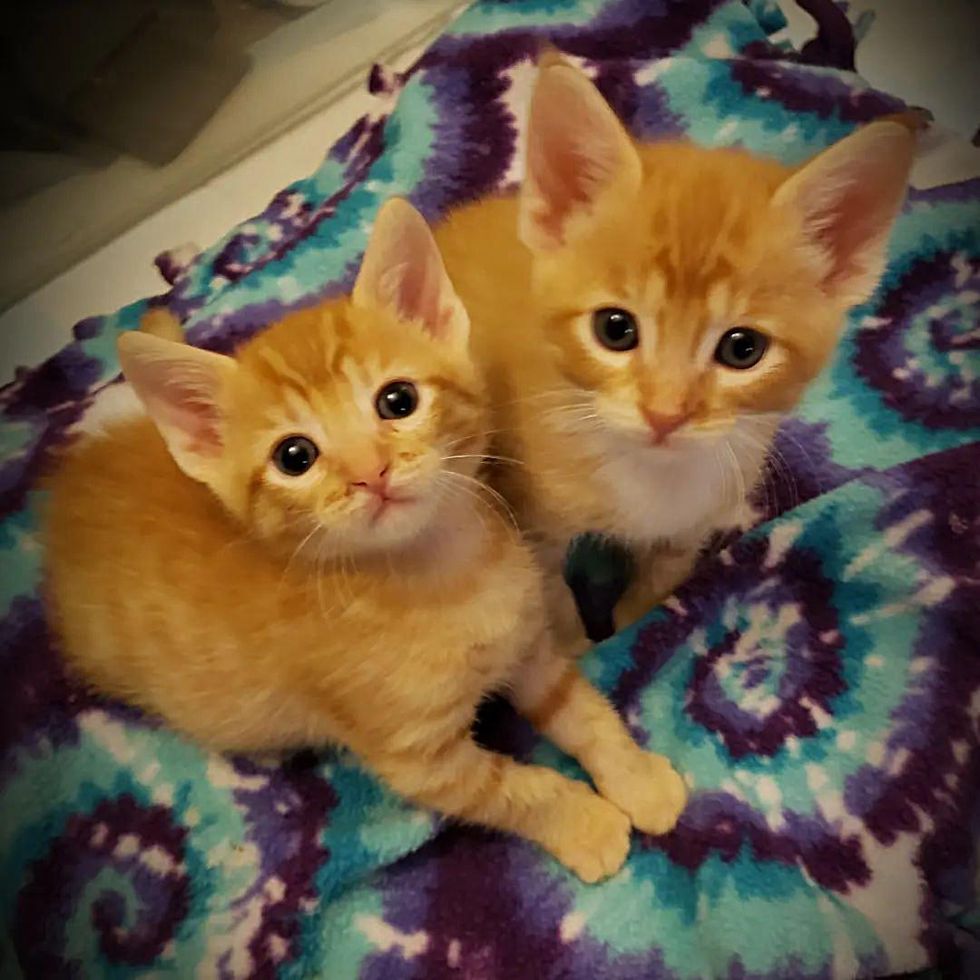 She quickly brushed all the worries aside and got right to work. Together with her son, Chris, they provided painstaking supportive care, day and night, and made sure the kittens were comfortable and loved.

After several sleepless nights, things began to look up for the duo, and Erin could finally breathe a sigh of relief. 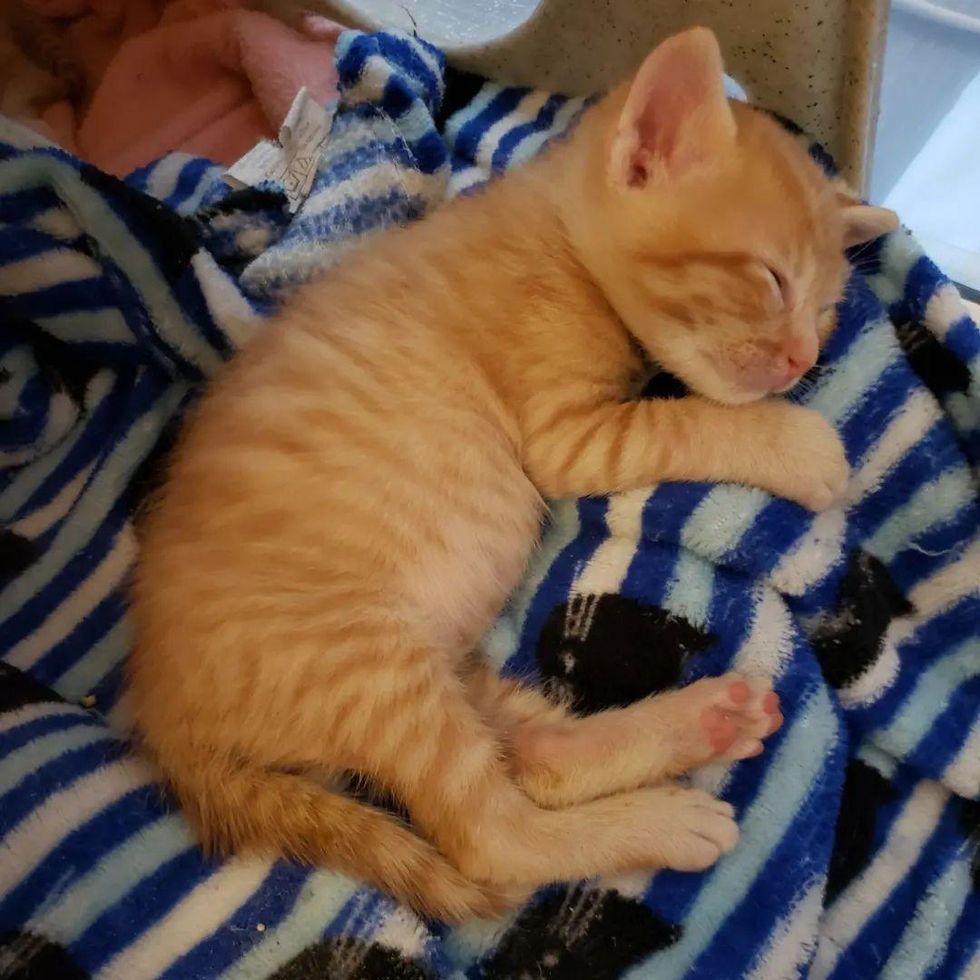 “They were so strong, active and playful little kittens. They were eating so much more than they had, and continued to gain weight,” Erin told Love Meow.

Mac and Cheese rubbed off on each other when they ate and played, and helped one another stay on track to recovery. They never ceased to amaze their people with their will to live life to the fullest. 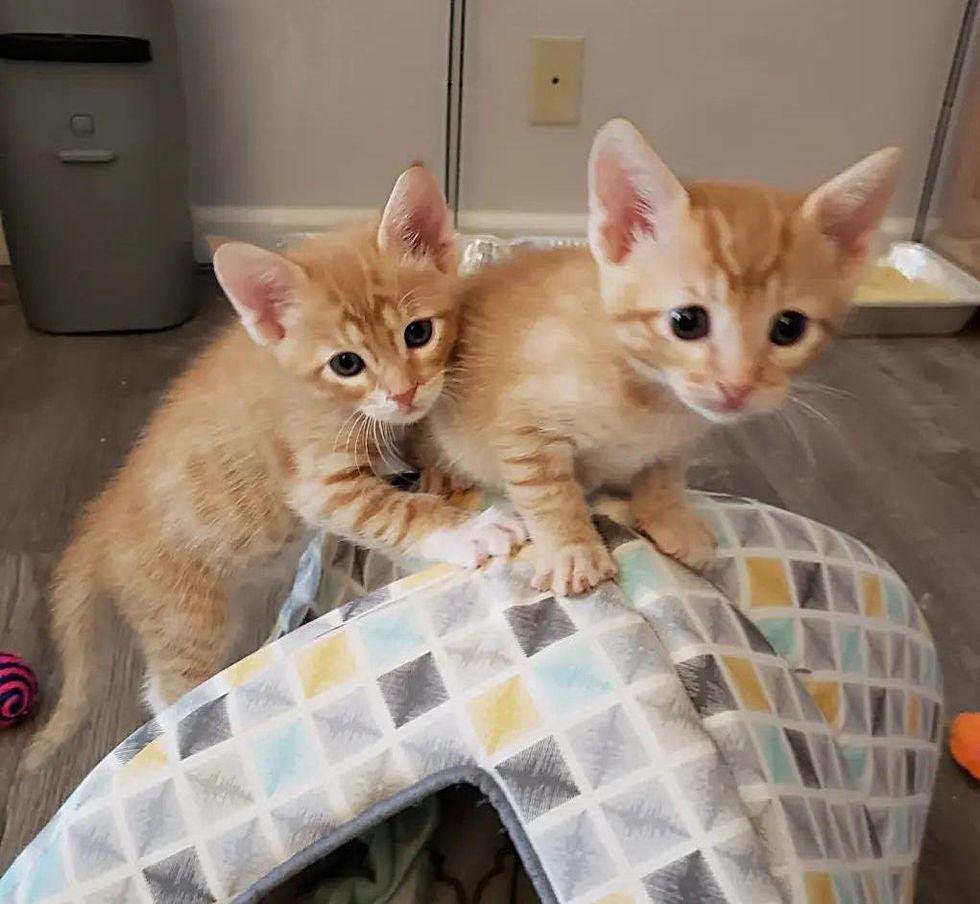 “Mac is the adventurous one, and he is bold and full of sass. Cheese is a little reserved but when it is playtime, he is ready to pounce. Cheese is the first to snuggle in your lap and Mac will be the first to attack your toes.”

The tabby brothers have grown very fond of Chris who is their favorite person to snuggle with. 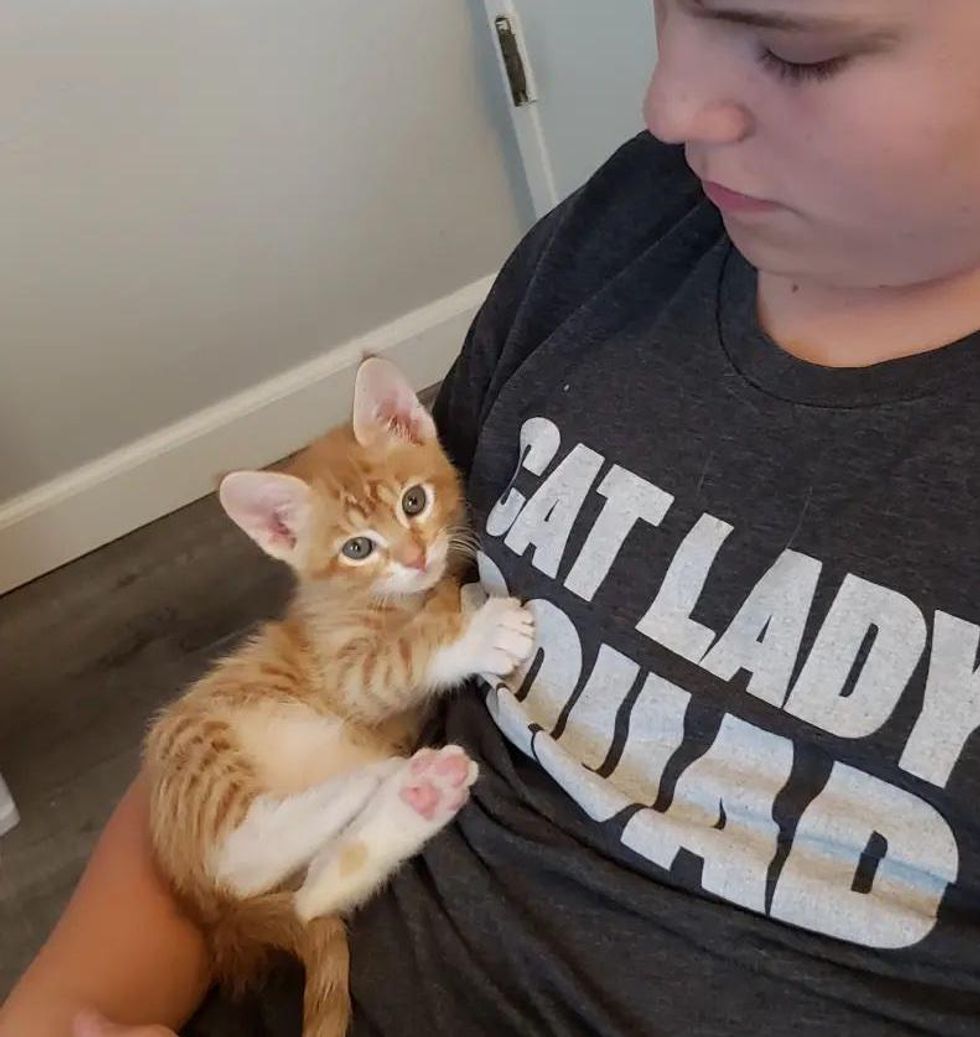 “The minute Chris comes into the room they will purr up a storm and want to be all over him,” Erin added.

“They love to play and chase each other even if you have a toy. Mac makes the best cuddle companion to chill with, and Cheese is 100% the creamiest, dreamiest slice of love.” 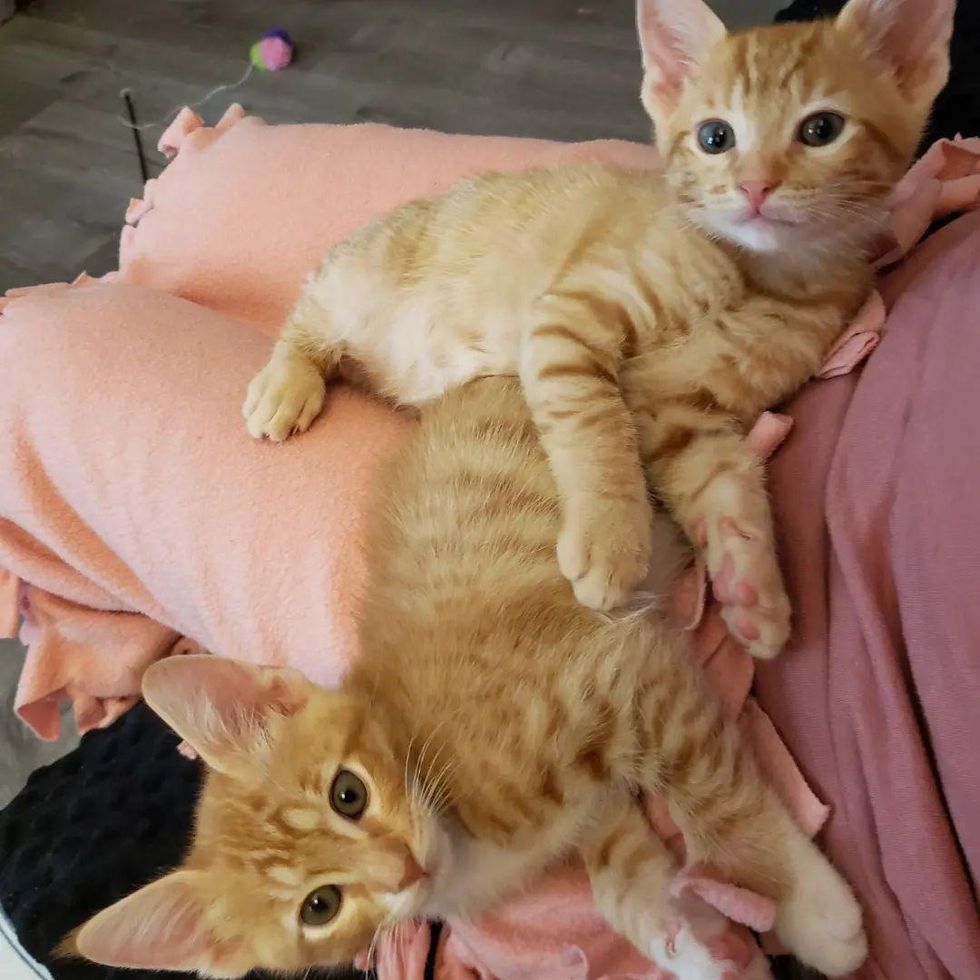 At about 14 weeks old, the two brothers have blossomed into a healthy, rambunctious pair with unbridled energy. They get nightly zoomies and are constantly on the lookout for mischief.

“After being abandoned by their mom, surviving panleukopenia and other tummy issues, Mac and Cheese are now seeking their forever home together.” 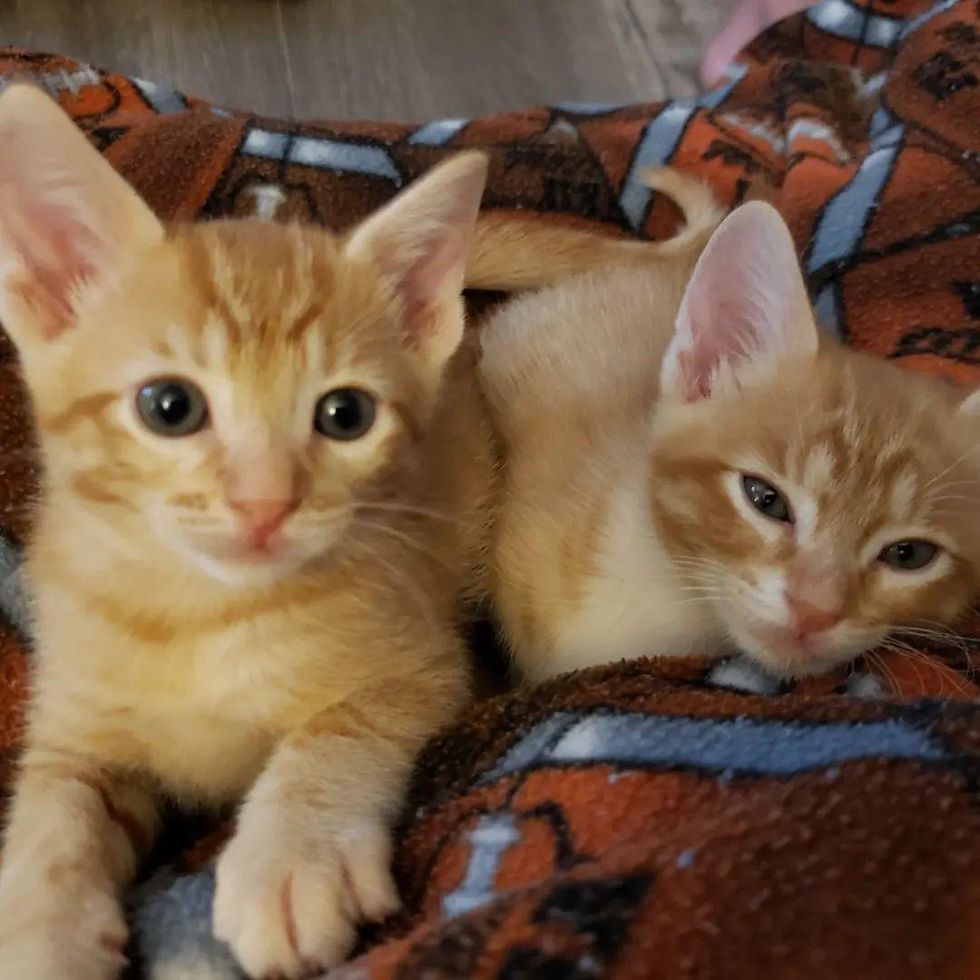 The twin brothers pushed through every obstacle together, and now are happy, lovable, cuddly young cats. 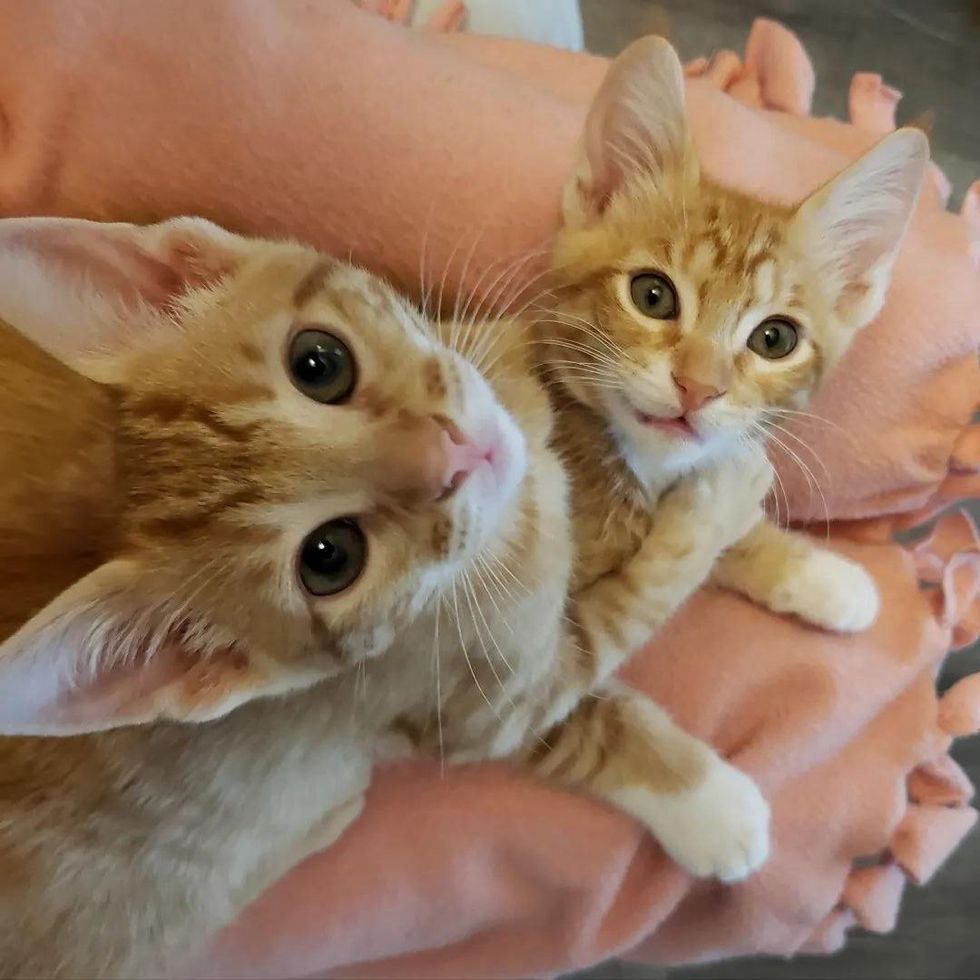 Related story: Orphan Kitten Goes from Hiding Under Blankets to ‘Roaring’ for Attention and Melting Hearts

Couple Find Lone Kitten Waiting on the Side of the Road, They Can’t Leave Him Behind