Kitten Scooped Up from the Middle of a Sidewalk, Snuggles in His Person’s Hand, He is Incredibly Small

A kitten who was scooped up from the middle of a sidewalk, snuggled in his person’s hand. He was incredibly small.

Rocco the kittenKitty of Angels

A good Samaritan was out for a walk in her neighborhood when she saw a tiny ball of fur in the middle of the sidewalk.

Near the bushes lay a little tuxedo, whose eyes were crusted shut due to an upper respiratory infection (URI). The finder immediately reached out to Kitty of Angels, the cat rescue that she fosters for, in hopes of getting the kitten the medical attention he desperately needed.

“She waited to see if a mama was close by, but there was no sign of one or any other siblings,” Lizzie Lewis, the founder of Kitty of Angels, told Love Meow. 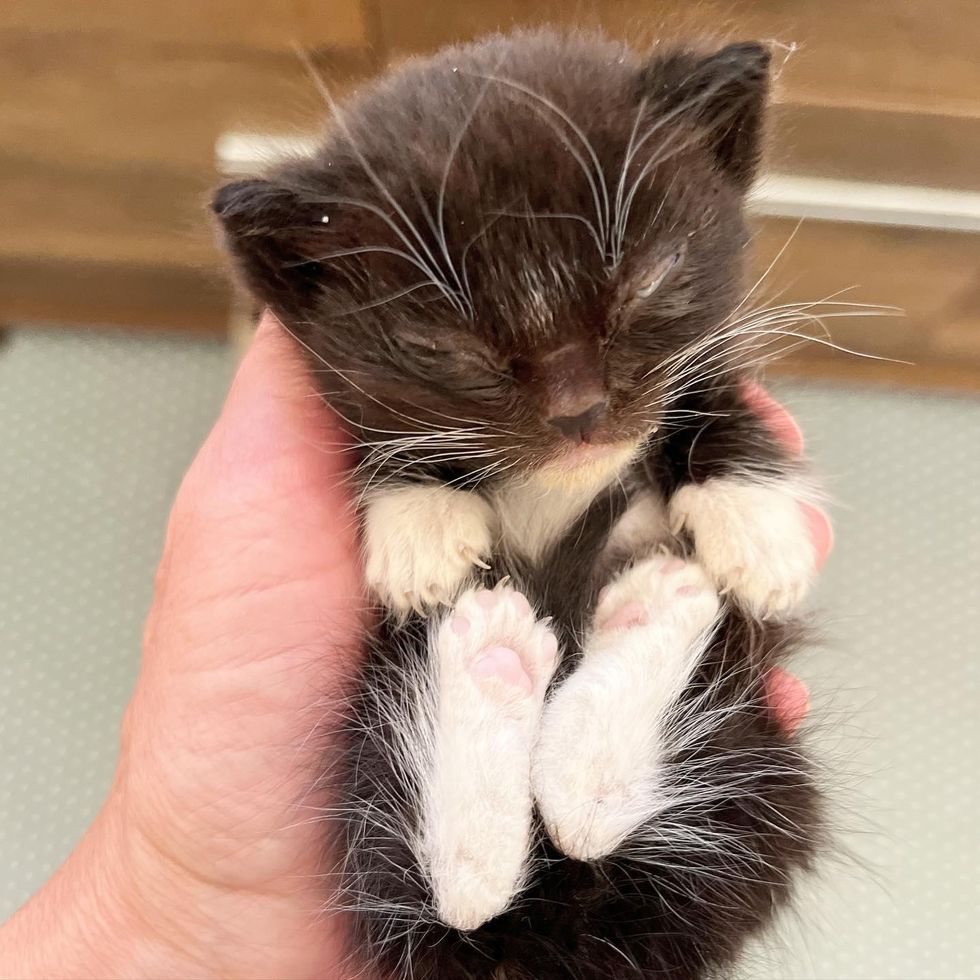 “Because he was so small and ill, we rushed him to the vet for emergency medical care.”

The kitten named Rocco was treated for the URI and went home with his foster mom to be cared for around the clock. The tuxedo boy was so tiny that he fit right in his human’s hand. For the first time, he fell asleep with a full belly while being held. 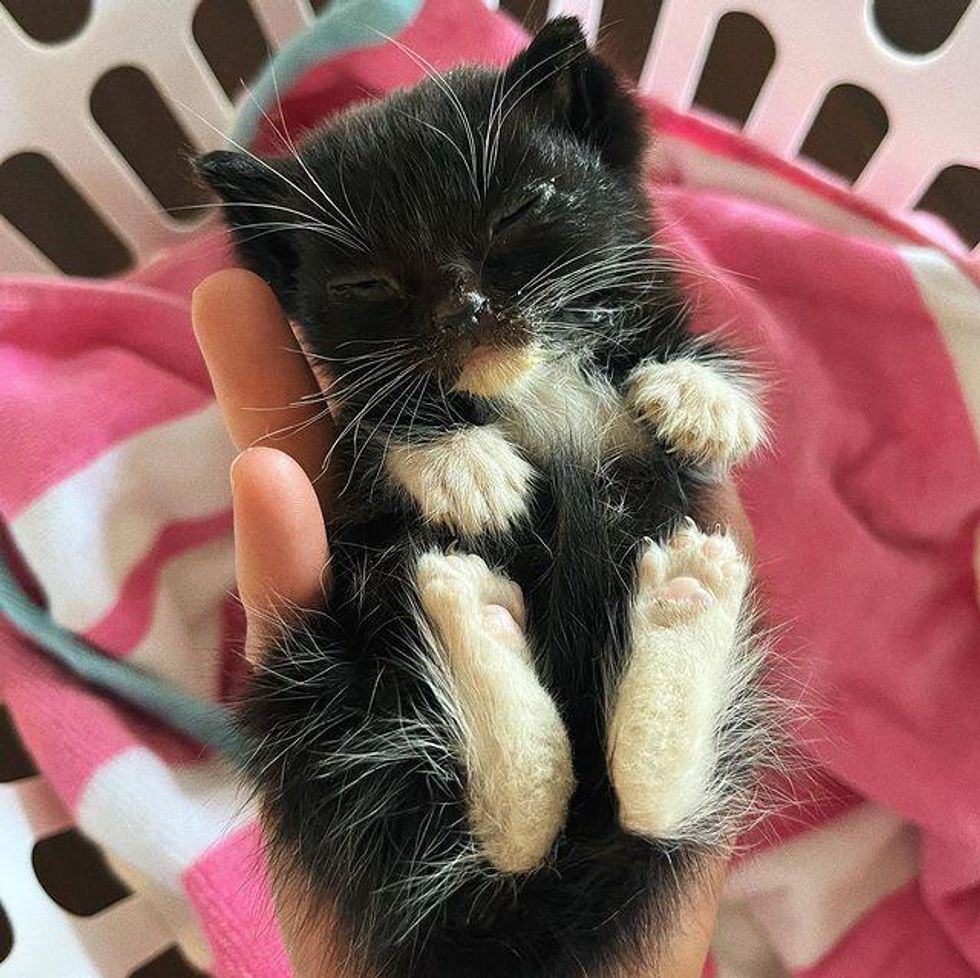 Rocco was an instant cuddle-bug and all he wanted was to be doted on. “His foster mom has been showering him with love and attention, and we’ve all fallen in love.”

A few days after his arrival, they noticed that Rocco “was having issues going to the bathroom” and remained very small. He was taken to the vet where he ended up staying for nine days. 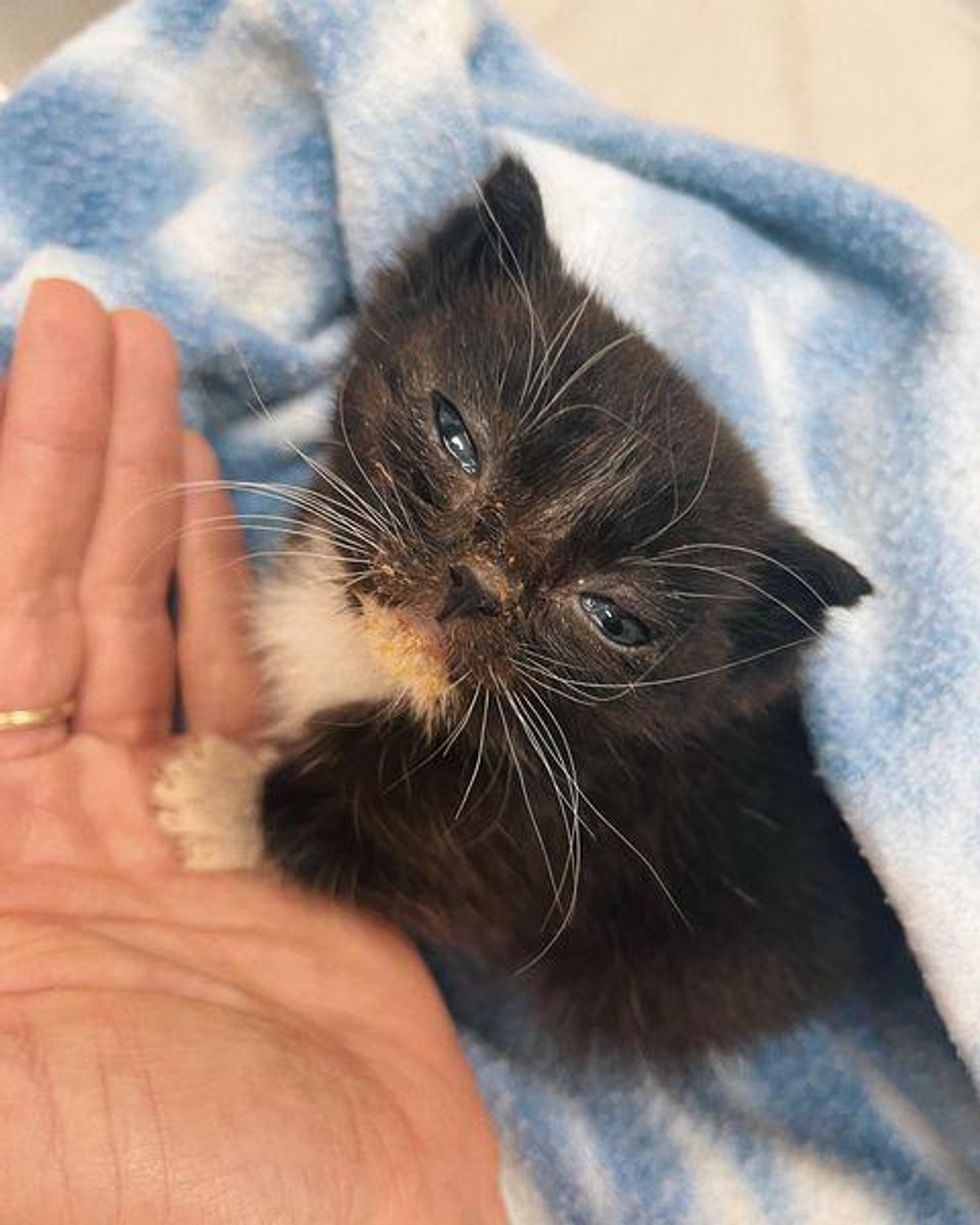 While Rocco was treated for constipation, he also displayed symptoms of a much larger issue. The vet suspected that he had congenital hypothyroidism, a rare condition which affects a kitten’s growth and development.

He was started on medication and continued daily treatment but took everything in stride. The affectionate kitten relished every moment with his people, and showed them that he was a force to be reckoned with. 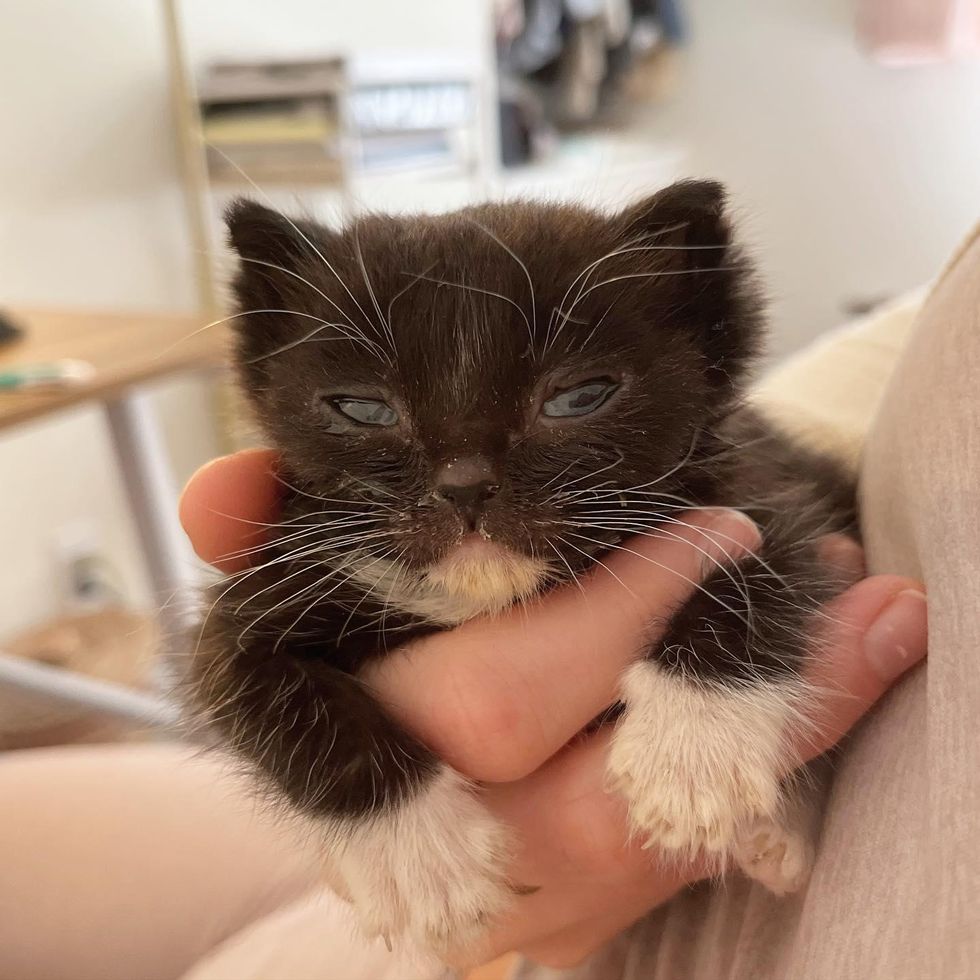 Rocco resembles a baby owl when he stands on his feet and gazes at his humans with those big doe eyes. Whenever he is held, he melts into their hands, starts making biscuits (kneading), and is ready for a nap.

While he was at the hospital, his foster mom went to visit him and was over the moon to see Rocco eat on his own like a big kitty. The little tuxedo never ceased to amaze his people with what he could do. 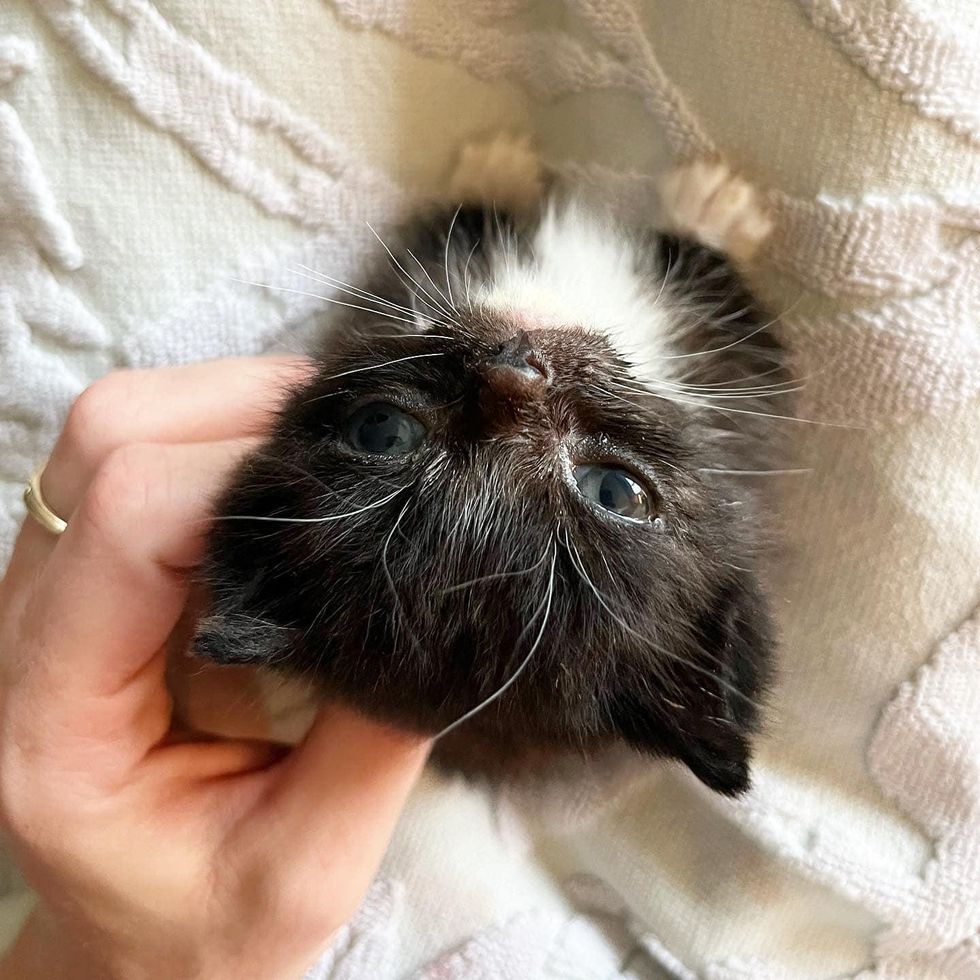 Once Rocco was back into foster care, he wriggled around on his comfy blanket, showing off his new-found strength. With so many people rooting for him, he discovered his voice and even started to explore and follow his foster mom around.

The little charmer likes to climb up his foster mom and knead away with his tiny mittens. He’s figured out how to escape the kitty pen to sit by his people until they give him attention. 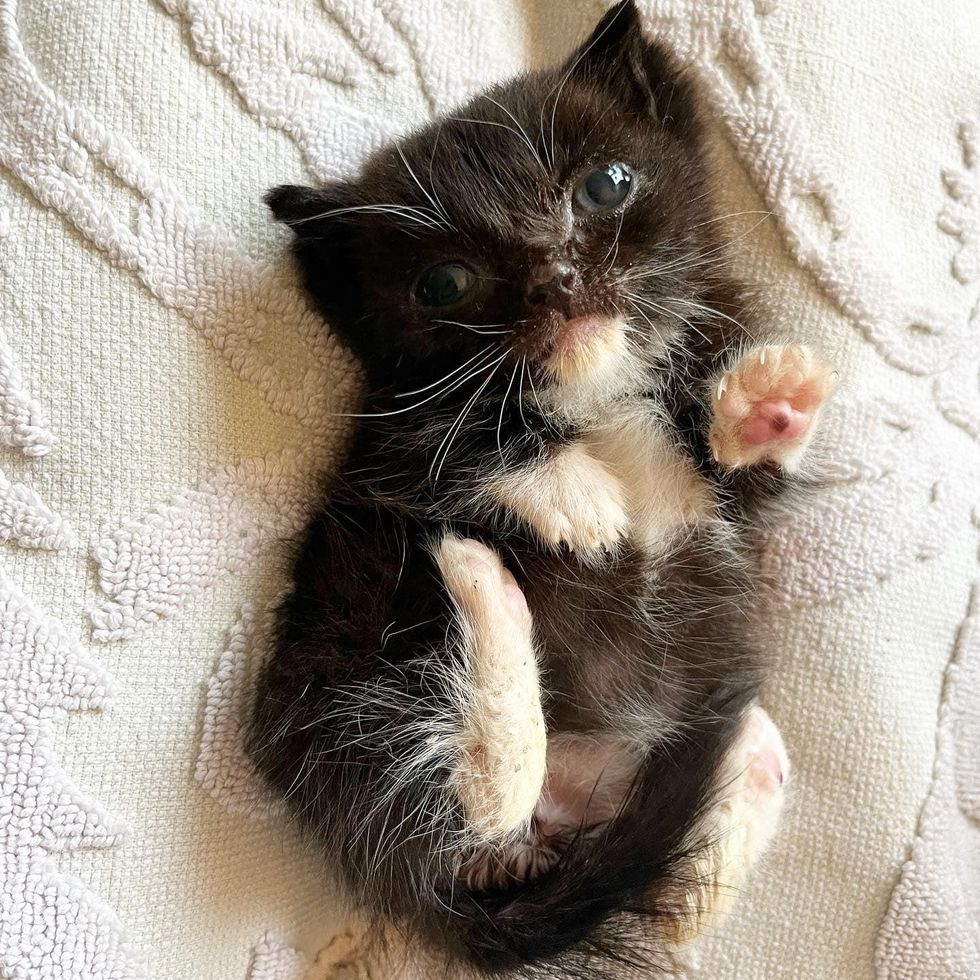 “We are trying to regulate him on his medication which does take a little while to really affect the issue. It’s been a couple of weeks, and he’s getting better and better,” Lizzie shared with Love Meow.

“We’ll keep up this process as long as it takes for everything to sort out. He’s such a perfect boy.” 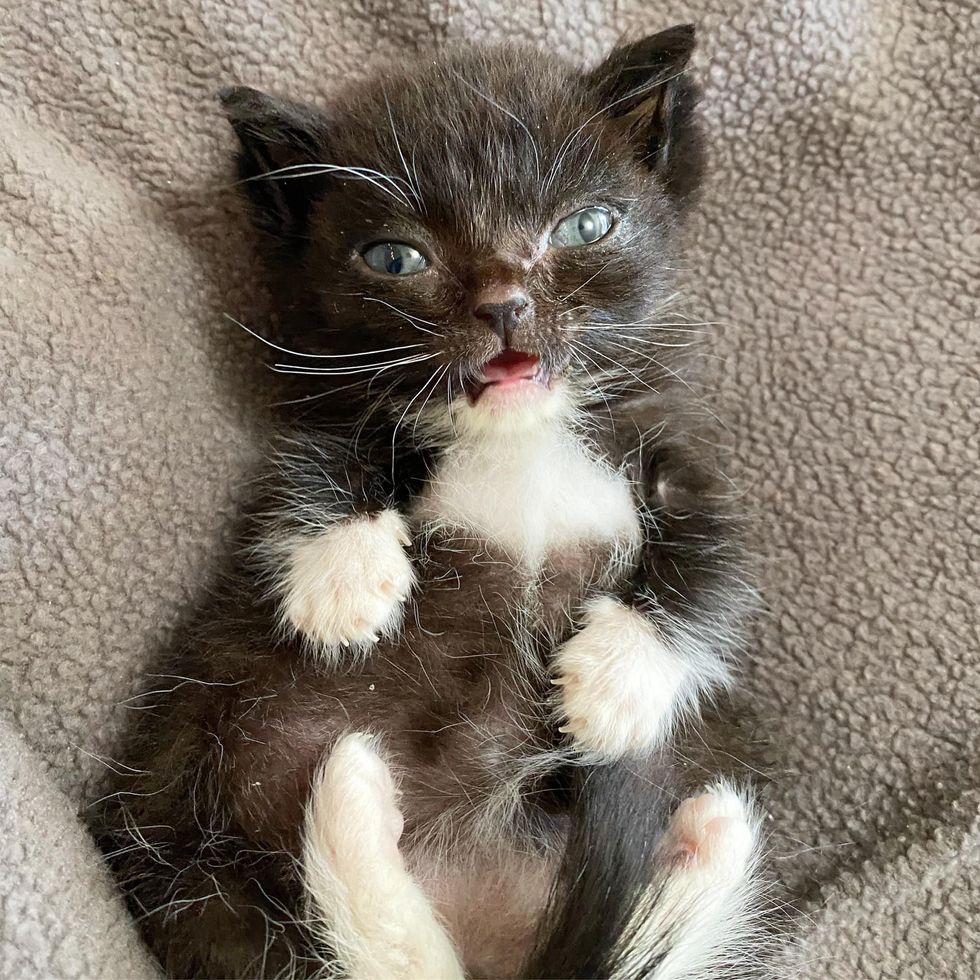 “Rocco is currently 13 ounces strong. We are confident that he will grow in leaps and bounds. He is always in great spirits and just an absolute joy to be around.” 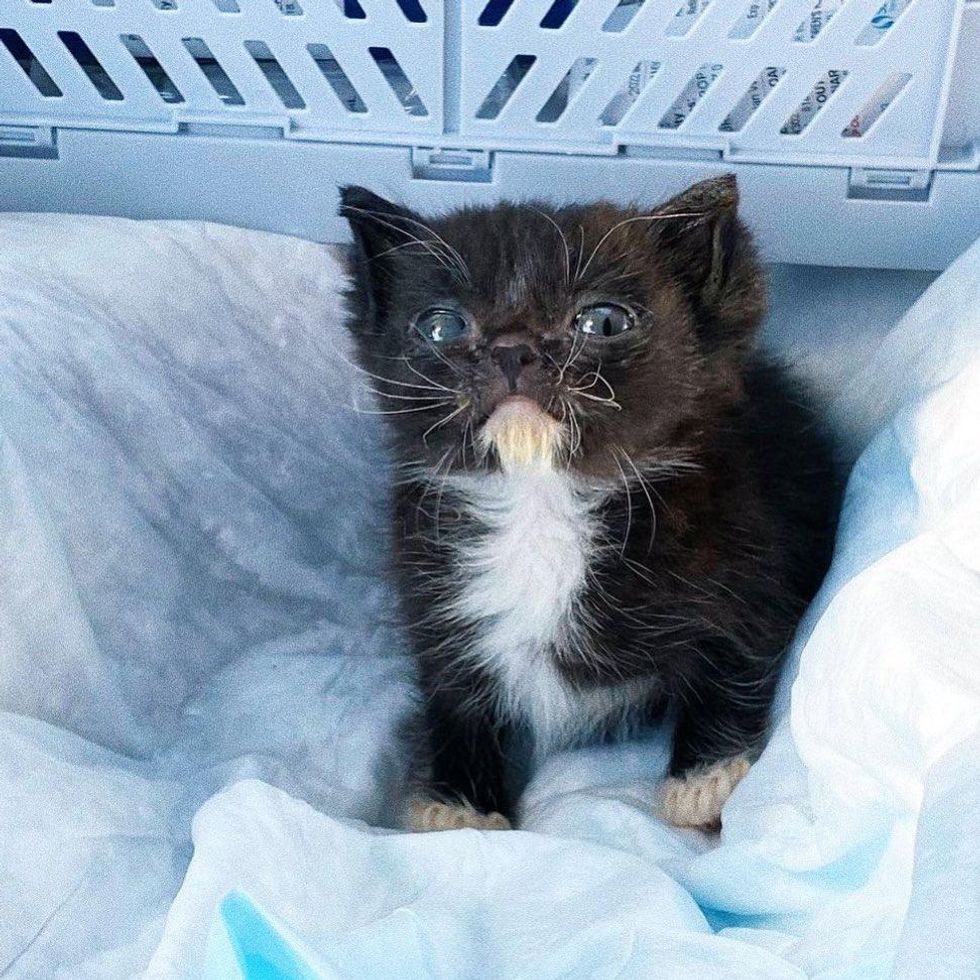 Related story: Kitten Who Is Done with Outdoor Life, Decides to Sit on the Driveway of a Home Until She is Taken in

Are Maine Coon Cats Friendly? (2022) Everything You Need to Know I Discernig Cat