A kitten came to a family as a timid stray and started to learn to be brave with the help of their cat.

Two kittens arrived at Salty Animal Rescue in Ontario, Canada in need of a lot of TLC. Salt (cream) and Pepper (tabby) were paired up at the Hamilton Animal Services as both of them were deemed under-socialized.

The two weren’t from the same litter and not bonded, but they both shared the fear of people as they had little to no human contact prior. They weren’t ready to be put up for adoption at the shelter, so Salty Animal Rescue stepped in to help.

“They were both found struggling as strays on the streets of Hamilton. We are here to give them the chance they deserve,” Karly Saltarski, cofounder of the rescue, shared. 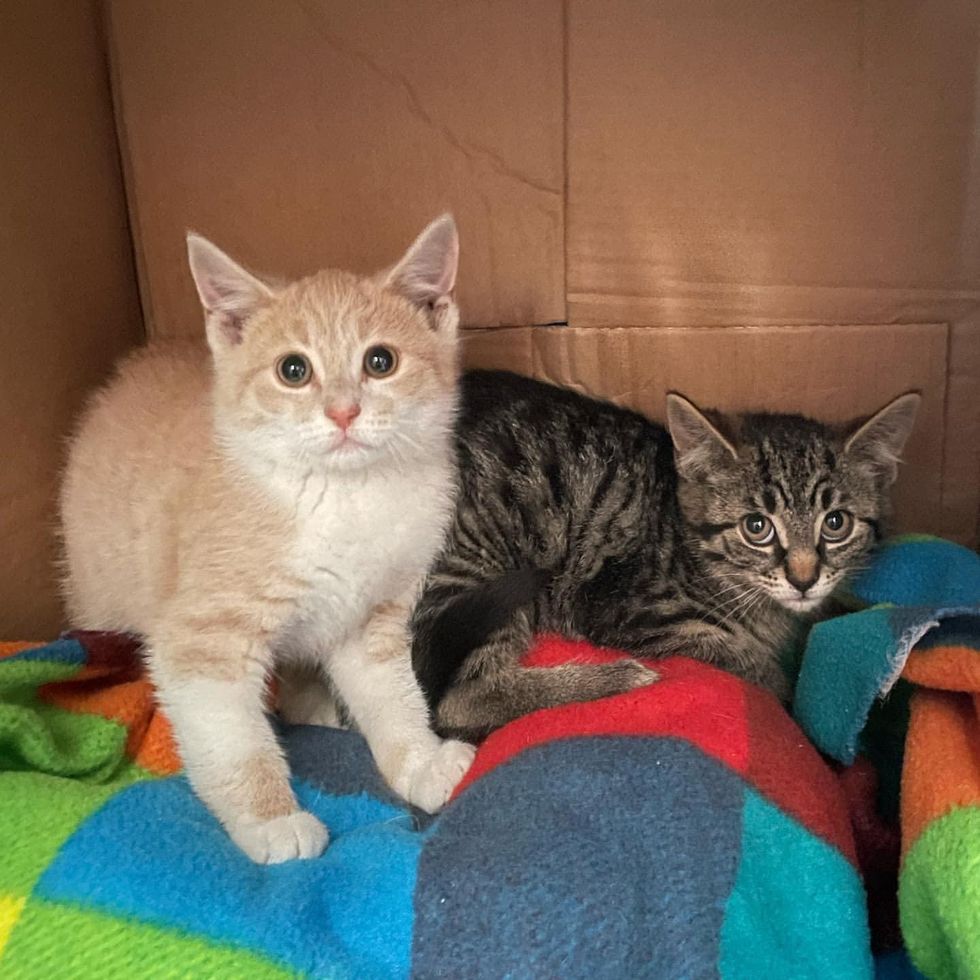 While Salt was full of hisses and spits, Pepper retreated to a corner, pretending to be invisible. She was so scared that her body froze and she tried to avert any eye contact with people.

Karly coaxed the kittens with treats that they couldn’t resist, and spent ample time talking to them and trying to get them used to touch. With lots of patience, Salt warmed up to pets, and Pepper became less vocal and physical about being scared. 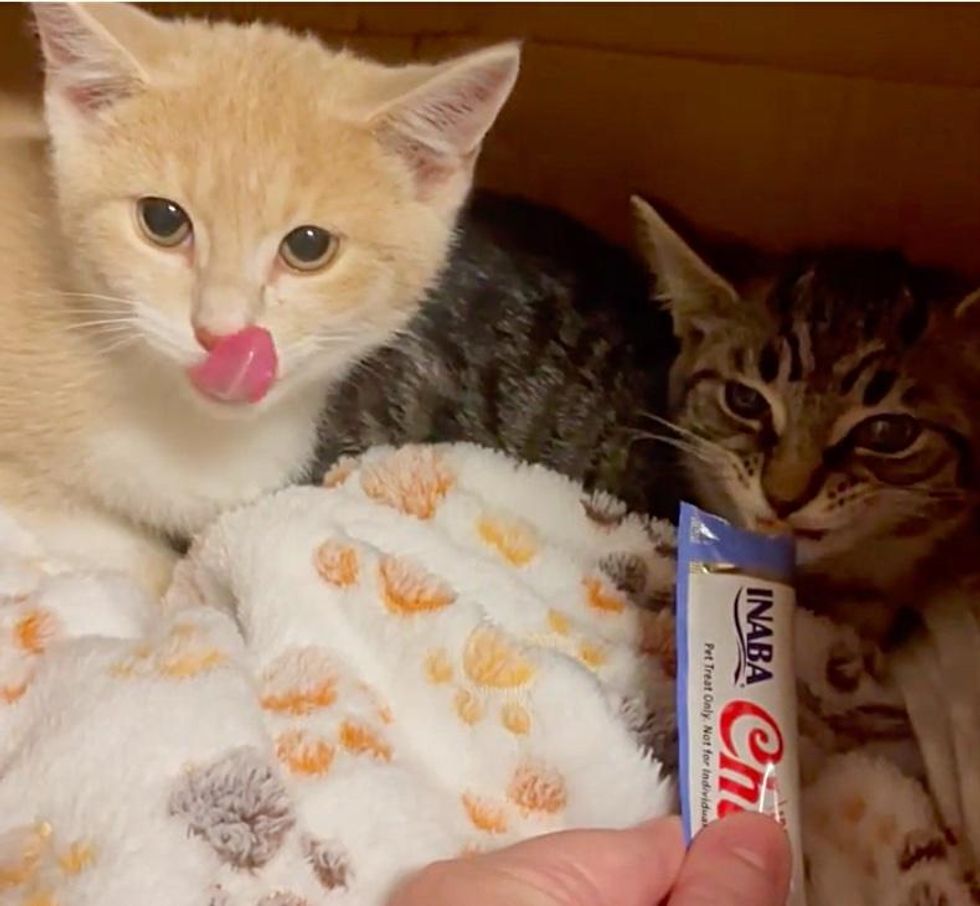 “Pepper still whale eyes me and hides but she’s slowly coming around.”

When the kittens were medically clear, they decided to get some assistance from a cat named Pippen who is a foster kitten extraordinaire. “He has previously helped a few fellow rescues come out of their shells, and Pepper was no exception.” 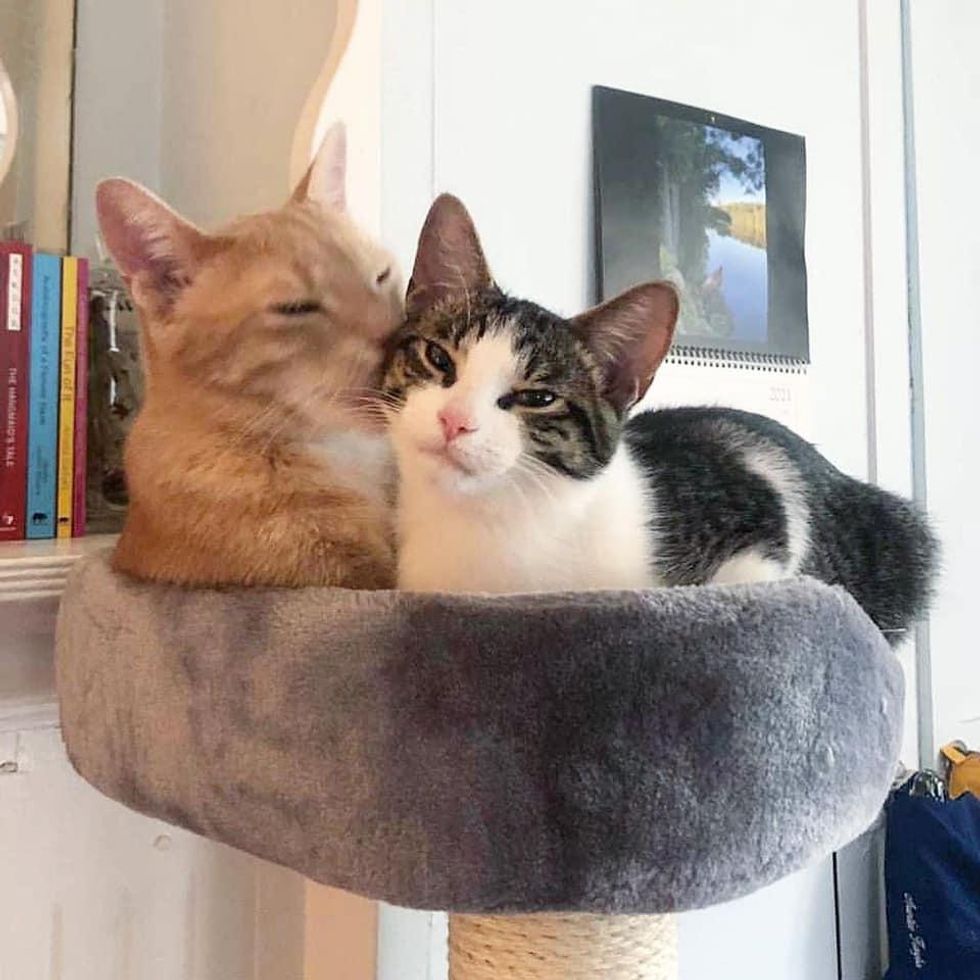 Pippen who was a rescue himself (and adopted by his foster mom, Kayla), seemed to understand just what Pepper needed. He took her under his wing and started nurturing her with licks and snuggles.

Underneath that fearful exterior lay a sweet tabby eager for love. When Pepper met Pippen, she was so enamored of her friend that she melted right into him. 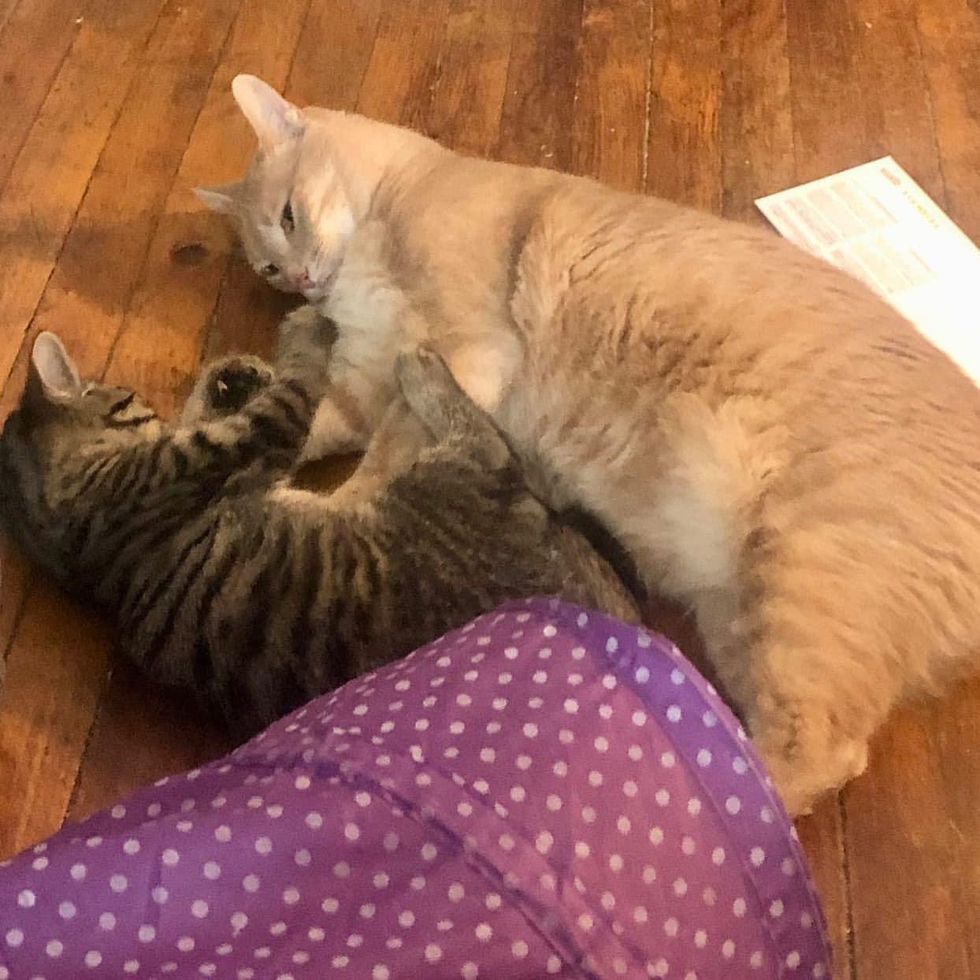 Pepper became very comfortable with her buddy and would seek him out for nap time. “As usual, he’s helped make our once constantly hiding Pepper a whole new girl.”

The rescue also introduced Pepper to other cats and fosters in hopes that she would finally be able to start trusting people. “She’s come so incredibly far. Since being with Pippen for just a short time, she’s acting like a different kitty.” 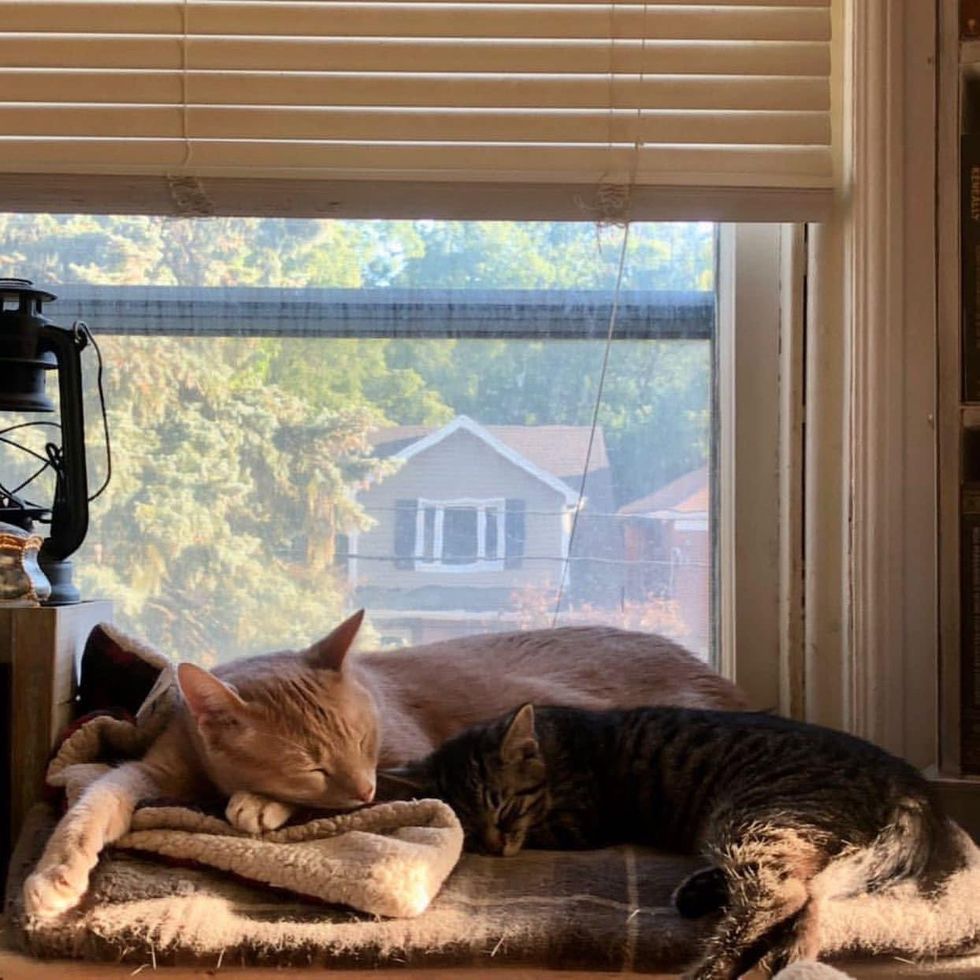 Pepper feels at ease whenever she’s with PippenSalty Animal Rescue

“Kittens like Pepper seem to be overlooked (because of their shyness). When they are in the right environment and given the chance, once scared cats and kittens actually make the best family members,” Karly shared.

Pepper, 15 weeks old now, has transformed into a sweet, gentle young tabby. “She allows handling and petting (when she’s comfortable), and even gave another foster mom, Elaine, her first purrs.” 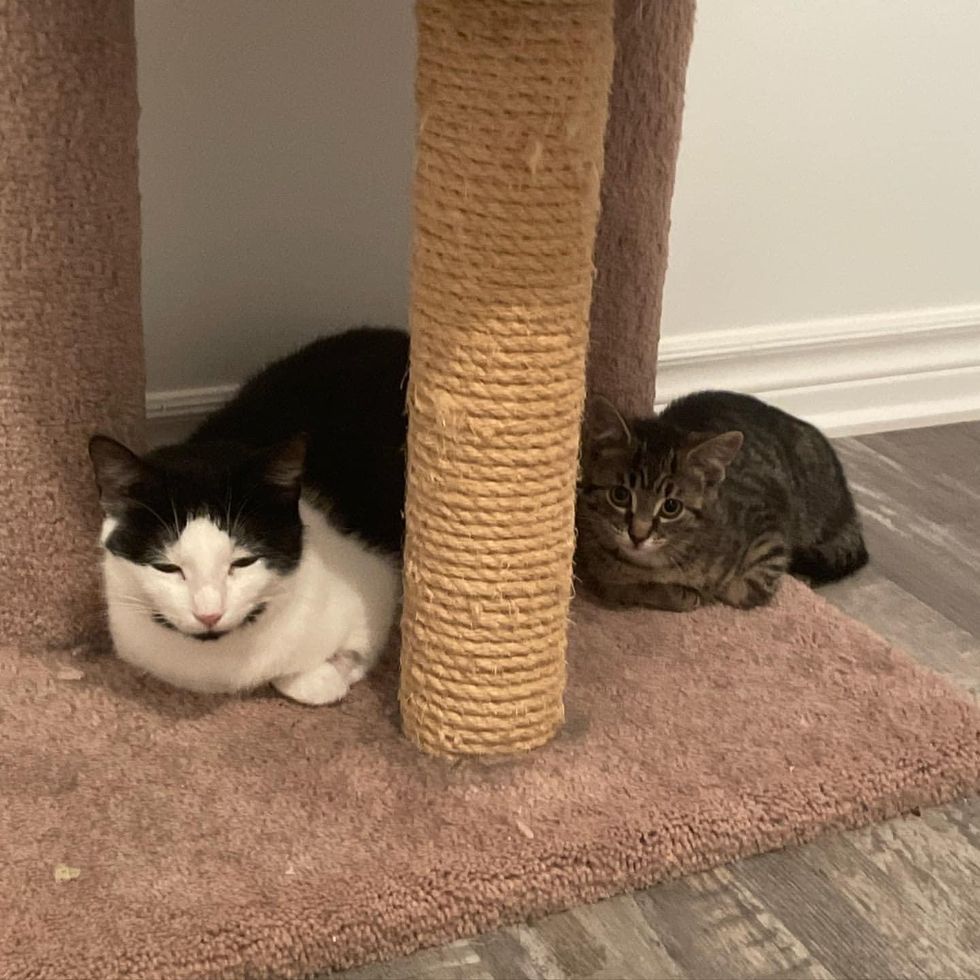 She’s made friends with other cats tooSalty Animal Rescue

She thrives with a loving, confident cat who can show her the ropes and teaches her to be brave. She is learning from the older cats, following in their paw-steps. Every day, she is less worried about people and more content and relaxed.

“She needs an adopter with patience and understanding. She will be your best friend in no time but just needs the chance.” 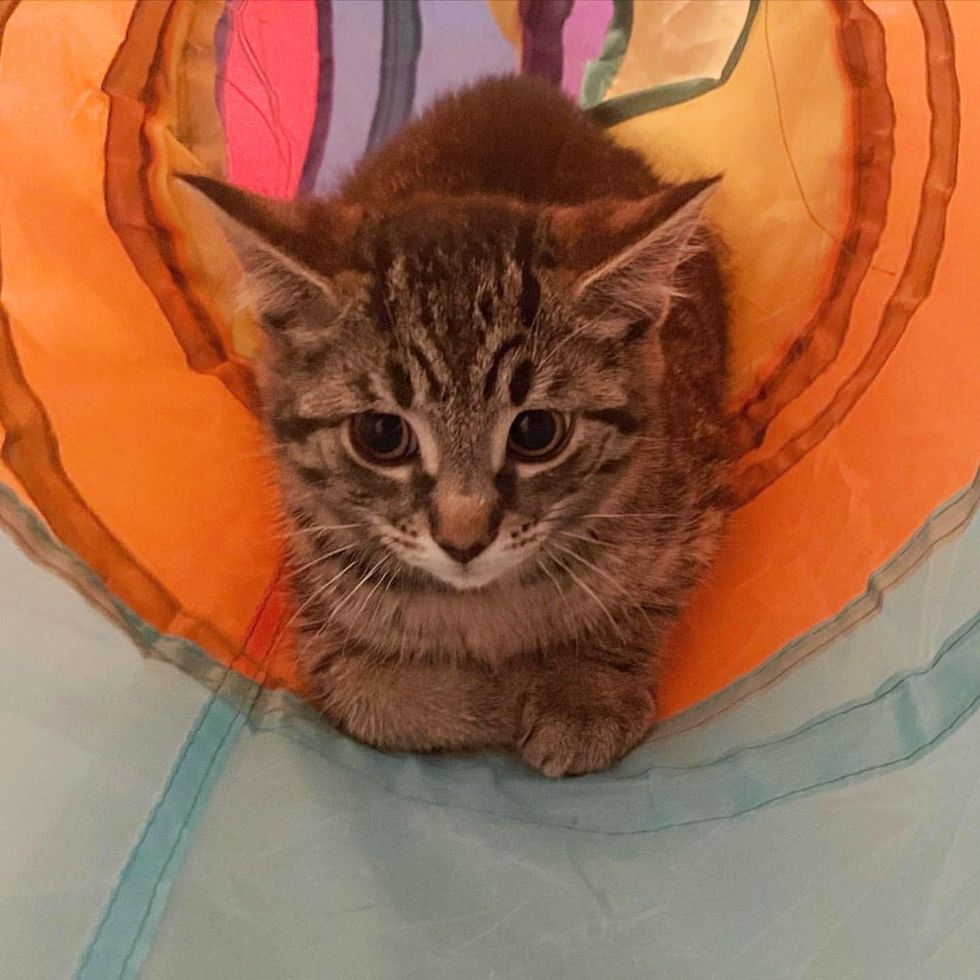 Related story: Family Cat Takes Kittens in As His Own After They Were Found Left Behind in an Alley

Cat Trilling: Why Do Cats Trill? Meaning Behind

Kitten Makes Big Transformation After Being Picked Up from Walkway, Now Has His First Holiday Season