Kitten Chatters and Chirps with Everyone, Hoping to Find a Place of Her Own

A kitten chatters and chirps with everyone and hopes to find a place of her own.

A black and white kitten was found on the streets of South Los Angeles and brought into a local animal shelter. She was about five weeks old with a scrawny torso, a pair of large ears and long whiskers. She had a lot of growing and filling out to do.

Stray Cat Alliance was able to rescue her and arrange for a foster home to host the deserving kitten. Alyssa W., a volunteer of the rescue, picked her up and welcomed her into her warm abode.

“When I got her, she was so tiny, shy and a little hissy. Once she was settled in a bigger space with toys, a clean litter box, and yummy food, she slowly started to come out of her shell,” Alyssa told Love Meow. 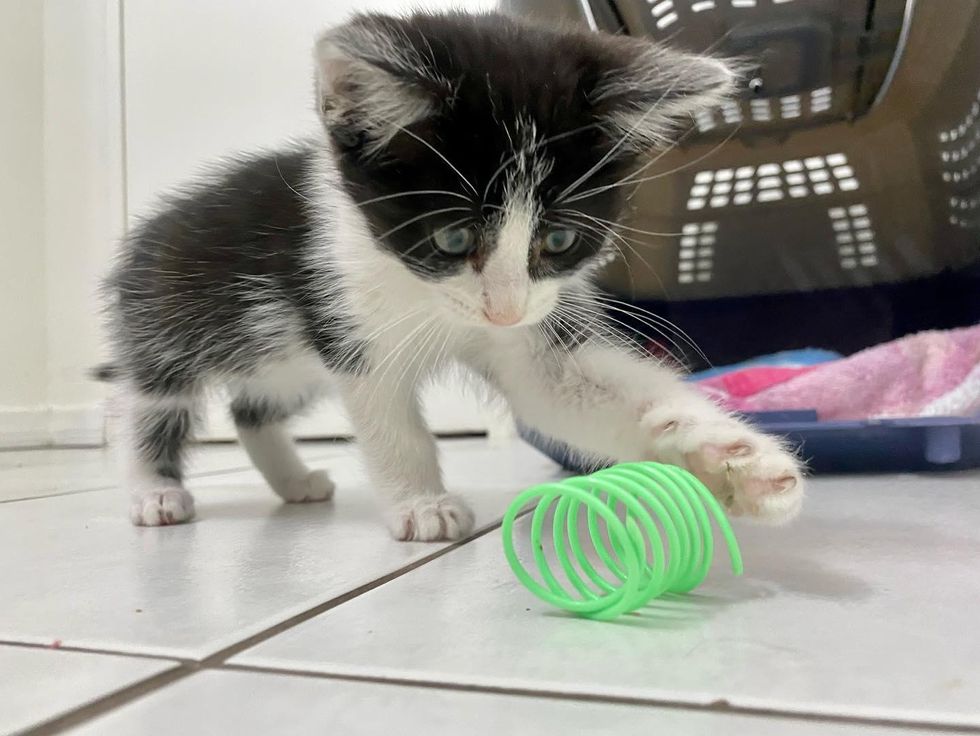 The kitten named Betty Boop warmed up to her foster mom when she realized that she no longer needed to hide. With a copious supply of food and a comfortable crib, her personality emerged.

Alyssa was surprised and amused when she heard the cutest sounds coming out of Betty’s mouth. 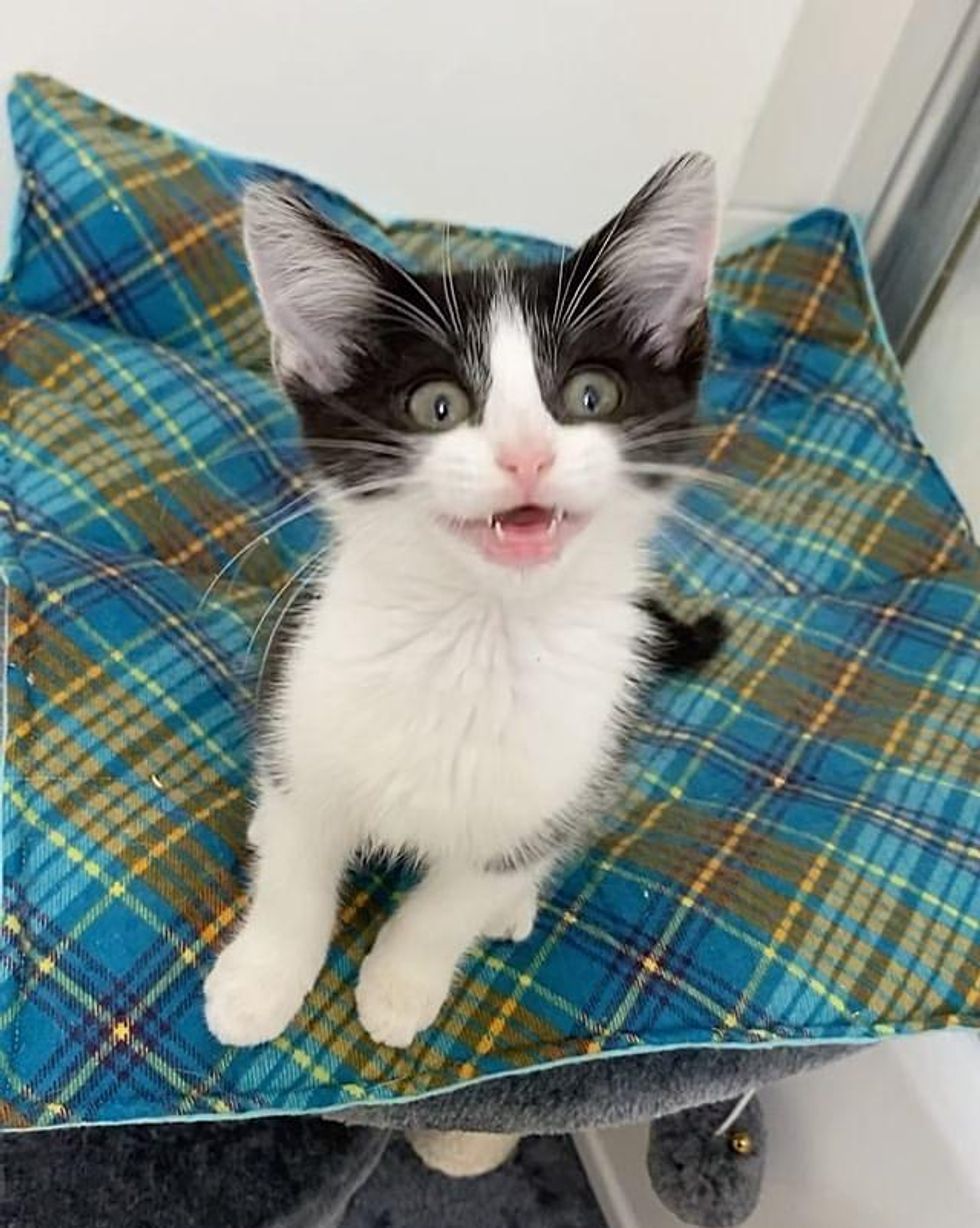 She got to hear Betty’s melodious chirps when she played or chased fervently after cat toys. Betty would tweet and chatter all the while trying to bat a moving string toy, sometimes on her tippy toes.

“She gets so excited when I bring that out to play, and I think those chirps are one thing that makes her extra special.” 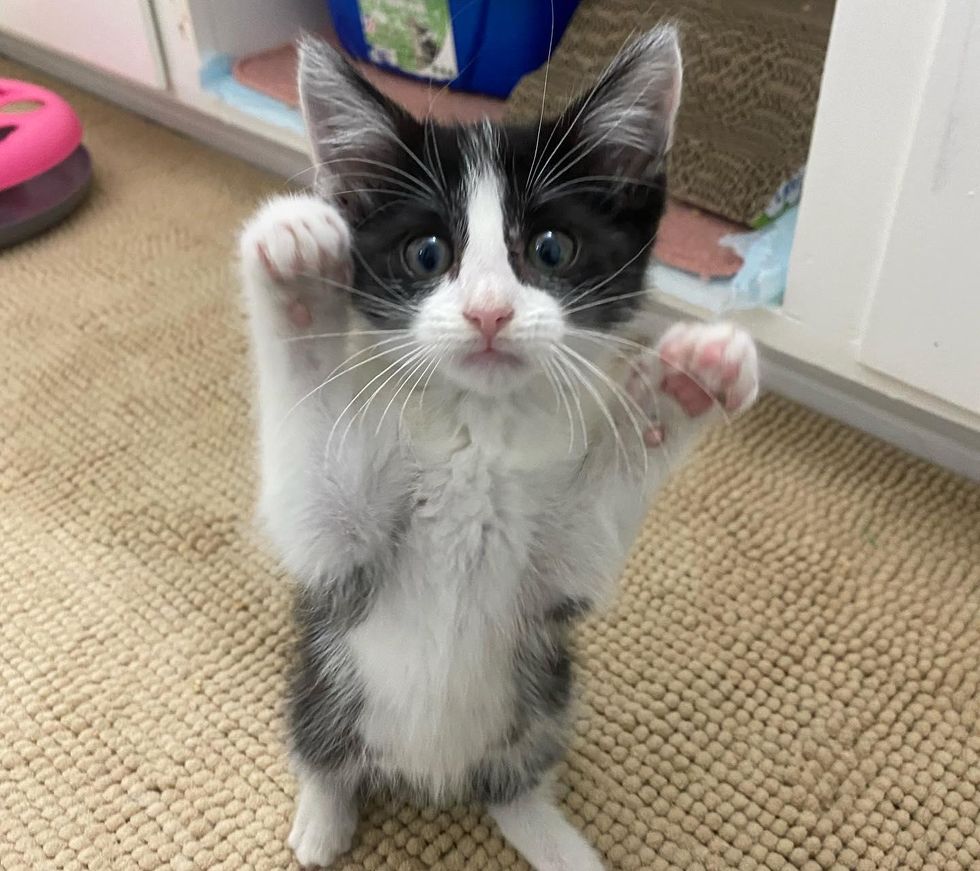 She will stare at her toy with so much intensity before breaking out into a chirpy clamor, in perfect Betty fashion.

“She now immediately purrs when you pet her and loves attention. She has become so friendly and way less nervous about people. I’m so proud of how brave she is.”

Betty has this mesmerized look on her face that only adds to her cuteness. 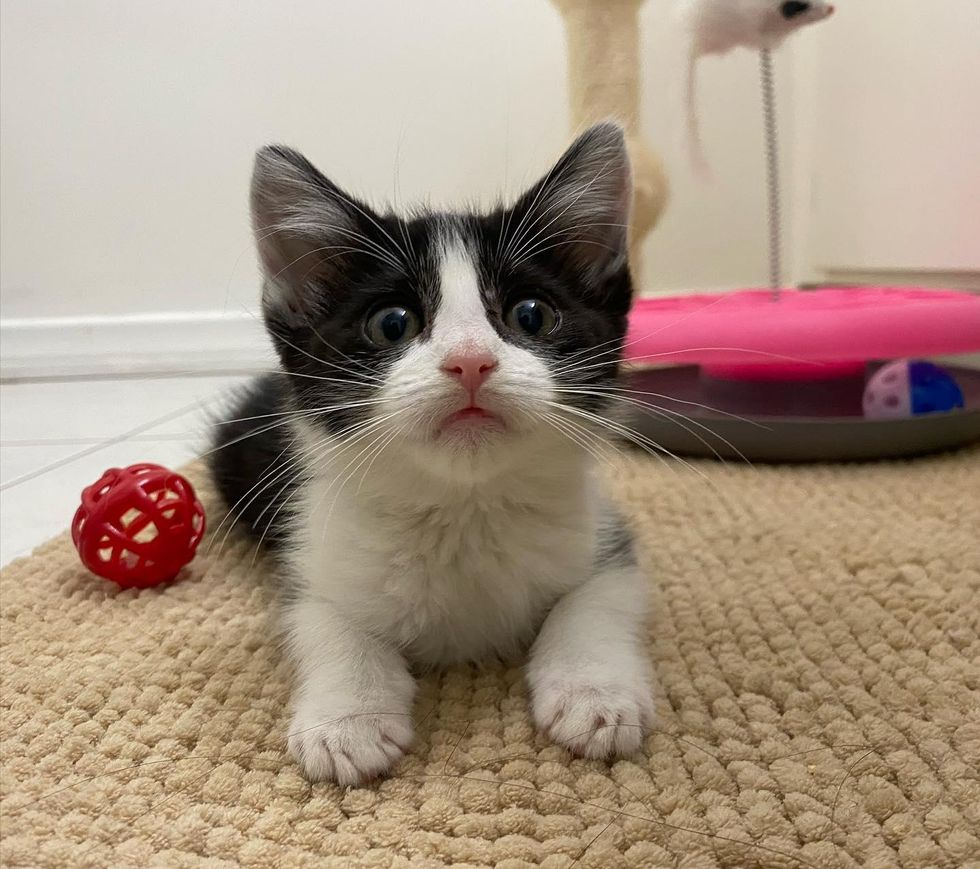 As part of socialization, Betty received some much-needed wisdom from none other than Mickey, the resident cat.

“Mickey takes in all of our fosters, so it’s no surprise that he and Betty were immediately friends,” Alyssa shared with Love Meow. 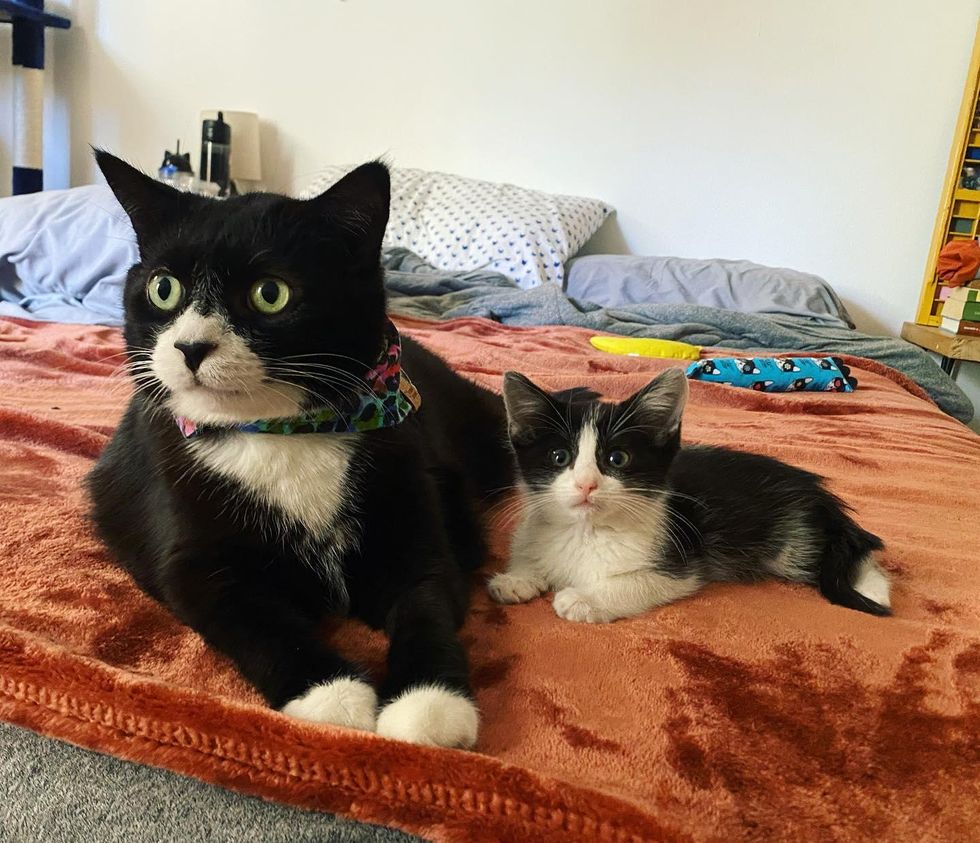 “It took Betty only a few seconds to realize Mickey was going to love her. She chased him, tackled him, followed him all around the apartment, and lay next to him on my bed.”

Mickey taught Betty boundaries and passed on important feline etiquette to help her thrive cohabitating with others. 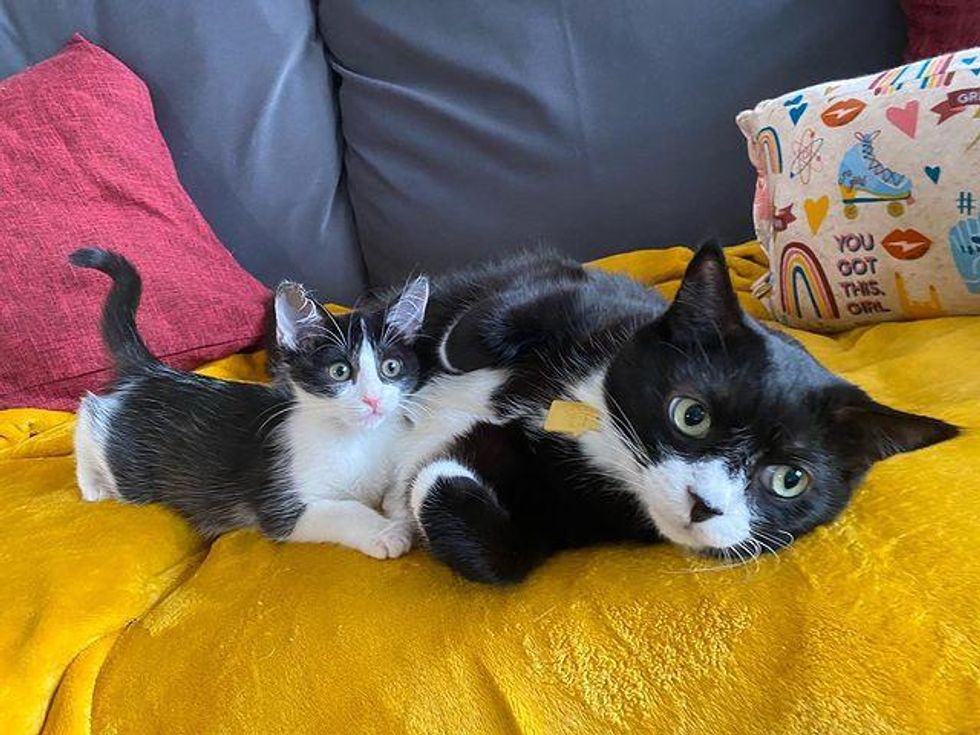 “She’s like the annoying little sister who learns from the big loving brother. She always has to be in the same room as Mickey, and I think he really enjoys her company.”

The chirpy purr machine has grown to be a ball of energy during her waking hours. She commands attention with her adorable chattering at toys, and lives by the motto of “play hard, and sleep harder.” 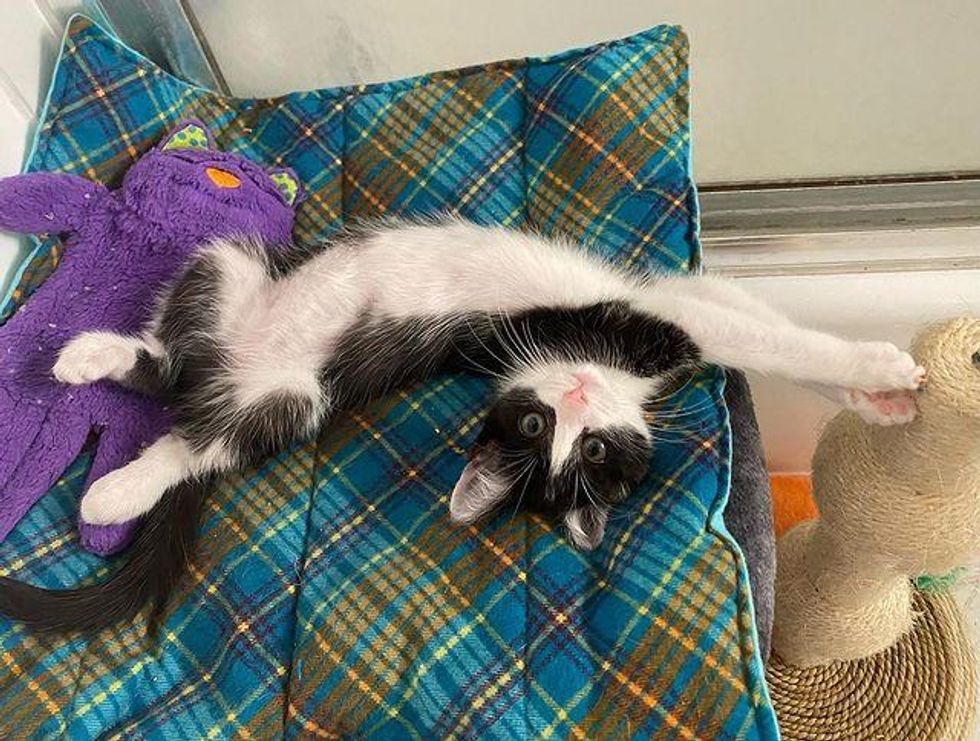 Betty is more than ready to find a place of her own after two months in foster care. She’s been chattering and chirping up a storm, hoping that special someone will come scoop her up and bring her home.

After wandering the streets as a lone kitten, Betty is as happy as a clam being an indoor cat. 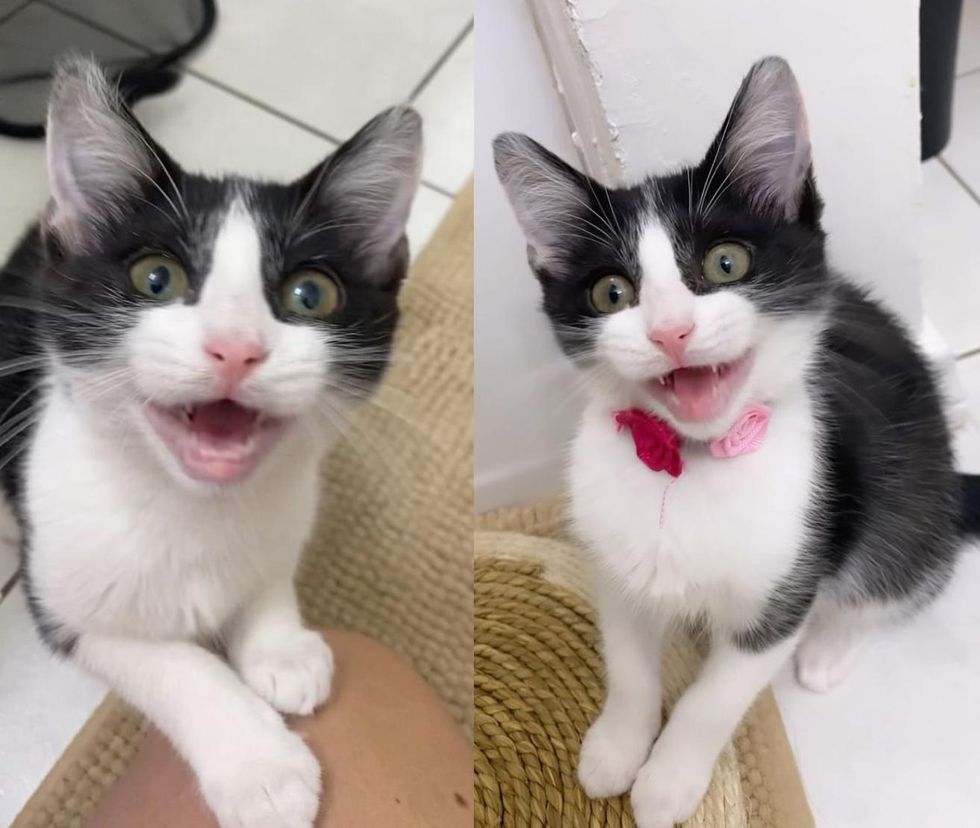 She can’t wait to share her unbridled joy and signature chirps with the family of her dreams. “She’s going to make someone very happy one day. I hope she can find her forever home soon.” 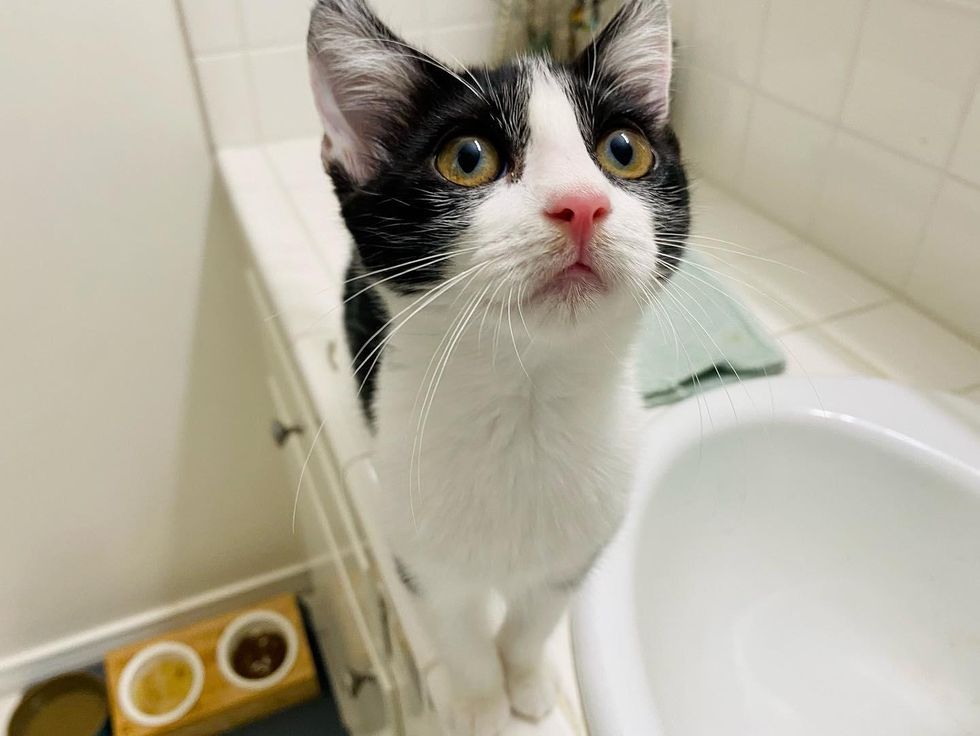 Related story: Kitten Spotted in Office Building Warms Up to People and Decides to Trust and Purr