Kitten Who Can’t See, Now Has Another Cat to Help Him Navigate and Learn to Be Brave

A kitten who can’t see, now has another cat to help him navigate and learn to be brave.

A 4-week-old kitten with severely infected eyes was brought into Saving Grace Rescue (in San Francisco) for a chance at a better life. The kitten named Mochi was in rough shape and had lost sight in both eyes.

Despite it all, the kitten came with a set of pipes and made it loud and clear that he was a force to be reckoned with. After getting cleaned up and treated, Mochi was very content being wrapped up in a towel like a purrito, as if he knew he was in good hands.

That night, the sweet kitten rested comfortably in a cozy, warm bed with a full belly and snuggle toys to keep him company. 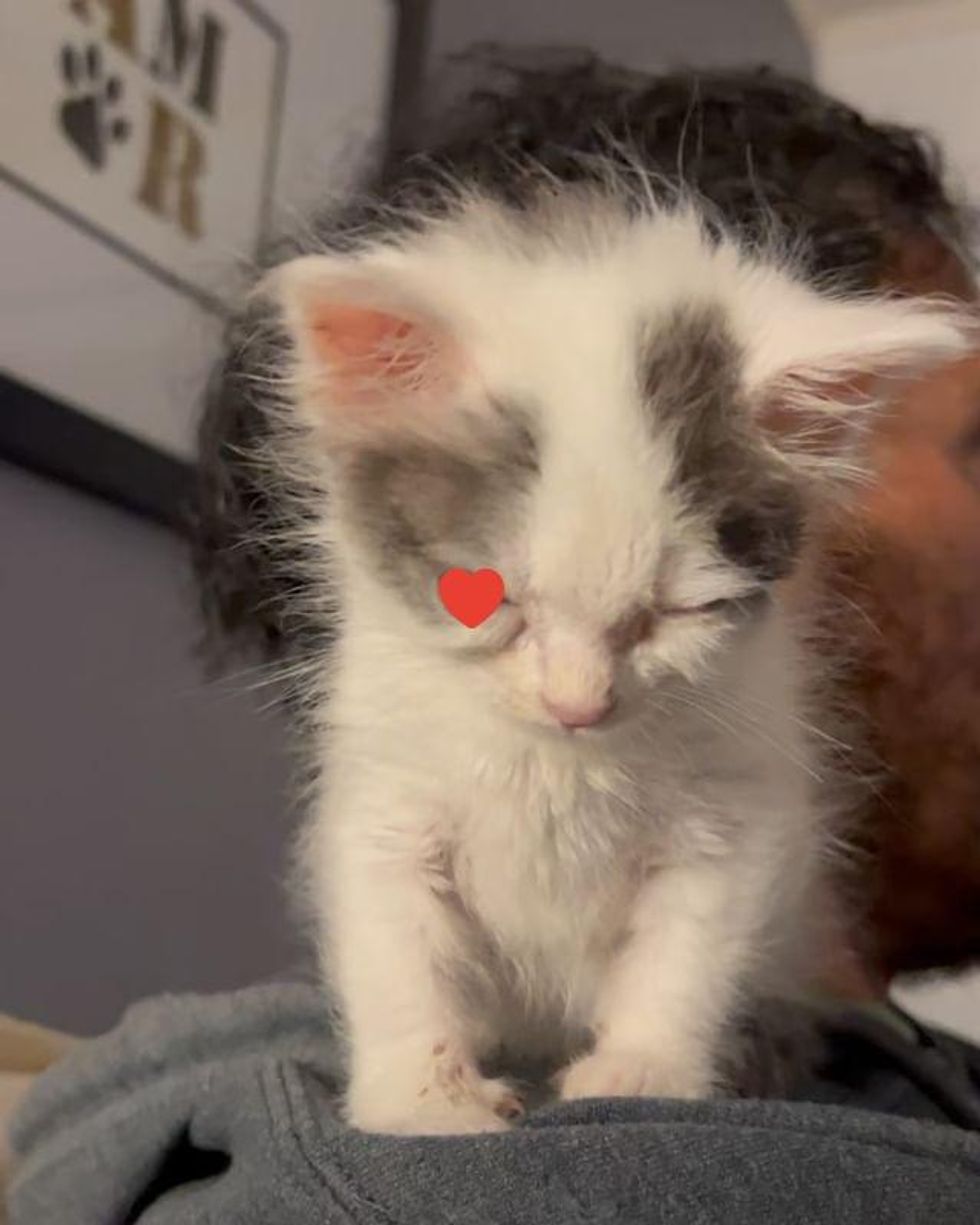 In the days that followed, Mochi was adamant about never being alone again. He insisted on tagging along with his foster parents, preferably on their shoulders (like a parrot kitty), tucked up under their neck or in their arms.

Mochi couldn’t see so he spent most of his time with his humans, his source of comfort, while he tried to navigate the world around him. Over the next couple of weeks, he continued to make strides and his energy level tripled. 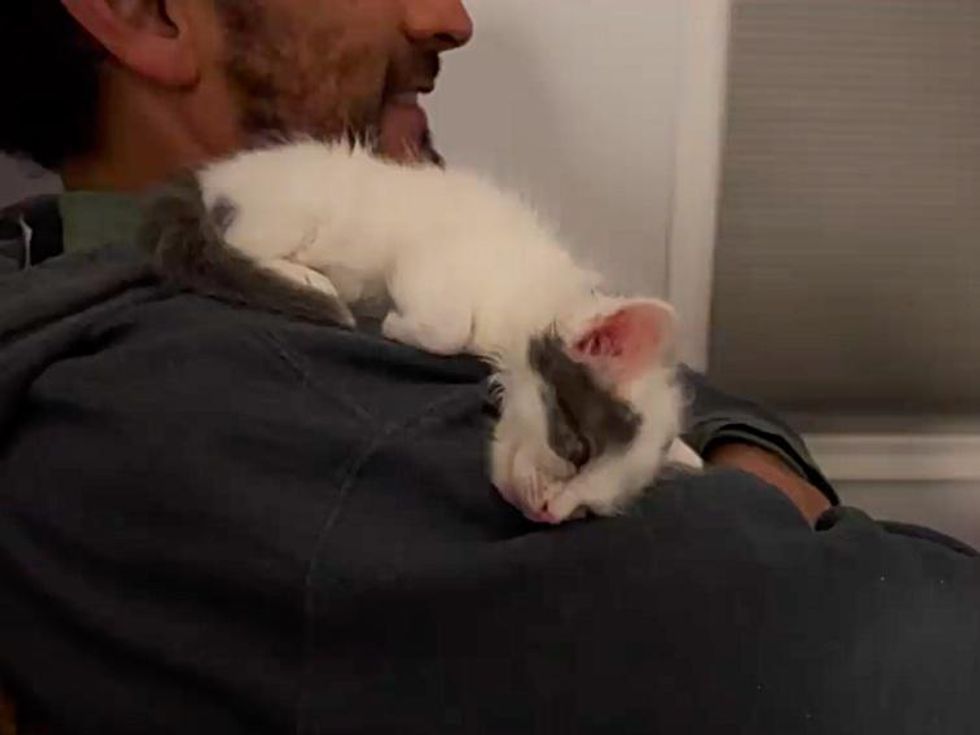 He was a cuddle-bug from the startSaving Grace Rescue

“He got better over time with lots of care. We knew he needed a buddy to play with,” Joyce, the foster mom, told Love Meow.

Around that time, a tabby kitten named Waffles arrived at Saving Grace Rescue seeking a second chance. Joyce took him into her care, washed off all the dirt and grime covering his soft coat, and nursed him back to health. 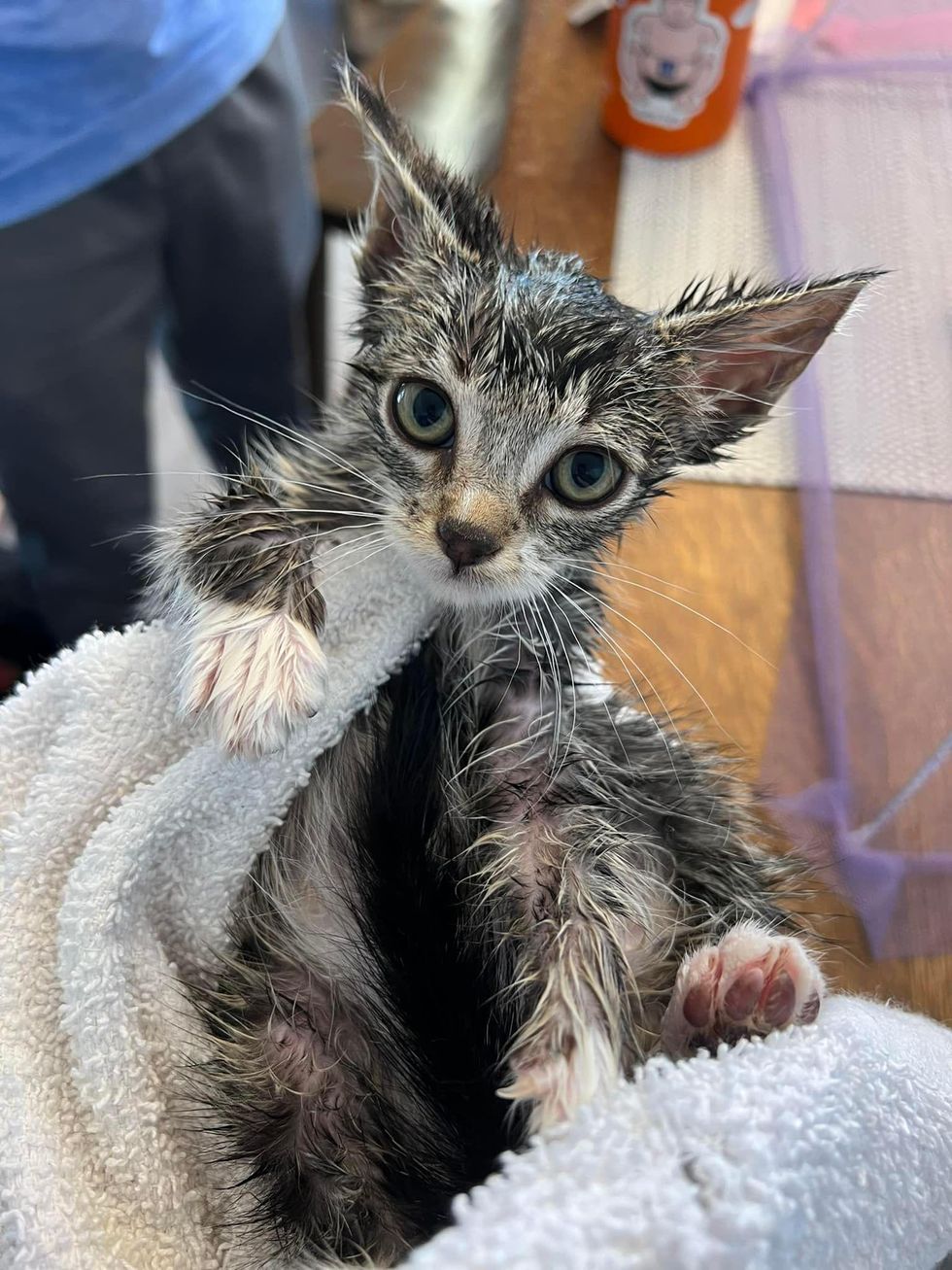 When Waffles was medically clear to interact with other kittens, Joyce knew just the perfect fur friend to introduce him to. She paired him up with Mochi, and the two instantly hit it off.

“They became fast friends. Waffles is very gentle with Mochi. They love playing with each other and absolutely love cuddles,” Joyce shared with Love Meow. 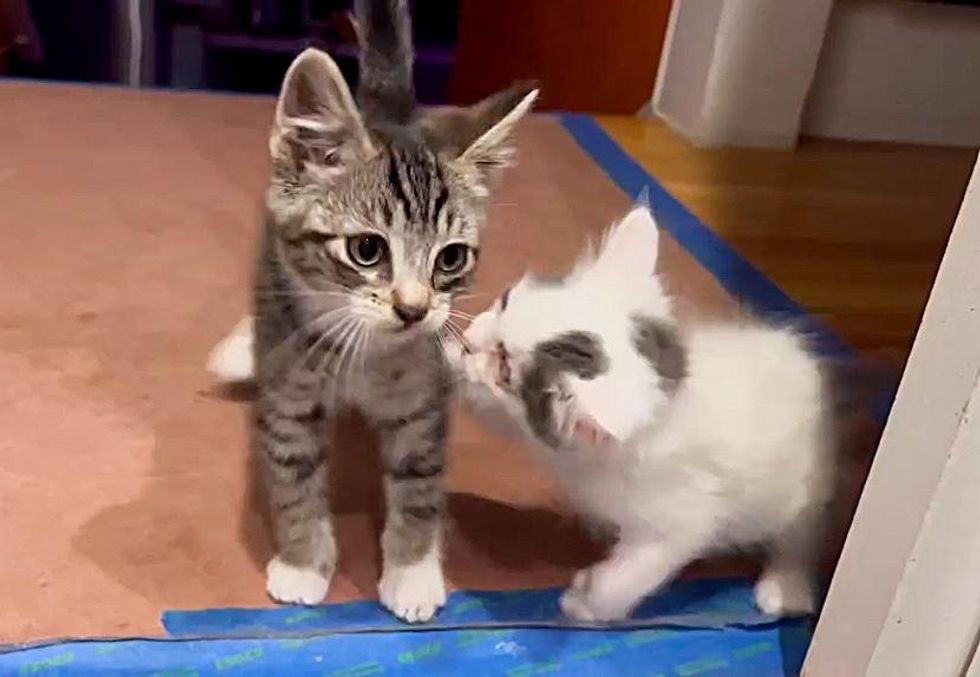 Waffles seemed to sense that Mochi needed some extra TLC, and was always by his side being his biggest cheerleader. Mochi followed in his footsteps and started to venture out of the nest to play more.

“Mochi has been getting braver as he navigates around our house, and Waffles has been helping him learn how to get on and off the bed, and how to go down the stairs.” 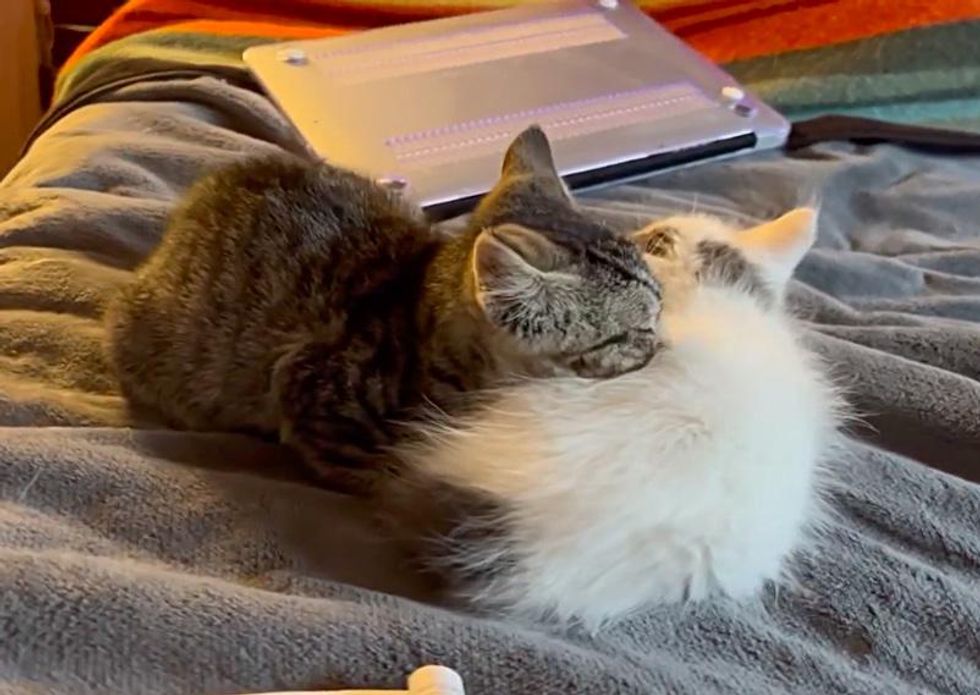 Waffles has become Mochi’s seeing-eye buddy. He shows him the ropes and leads him to new toys and adventures. When they are due for a nap to recharge, they curl up next to each other, and Waffles often rests his head on Mochi for good measure.

The foster room constantly reverberates with their rumbling purrs. 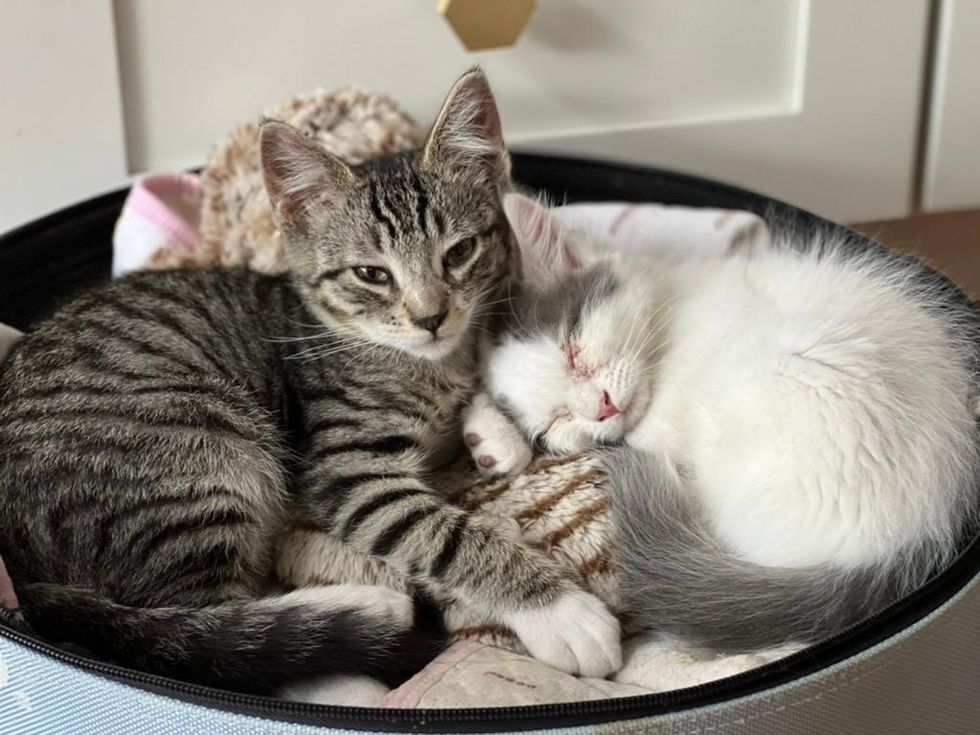 They came from different beginnings and overcame many hurdles before their paths finally crossed, and now they feel complete.

When Mochi is big enough, he will have a bilateral enucleation (eye surgery) to prevent infections. The two boys are looking for a loving home together as they depend on each other. 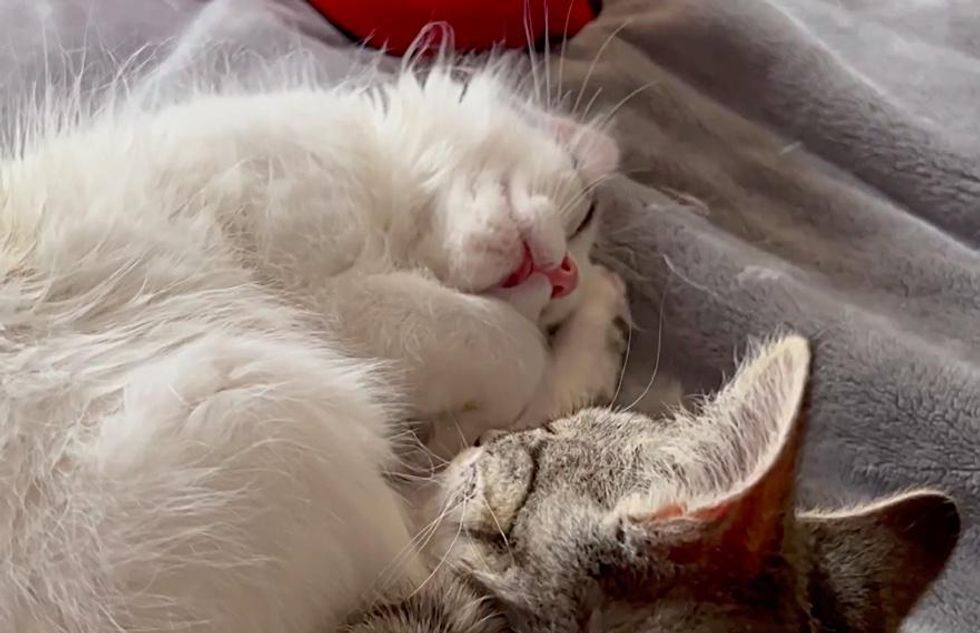 Mochi is the happiest he’s ever been since Waffles came into his life. They are shining like the brightest stars and loving their life as spoiled, indoor cats. 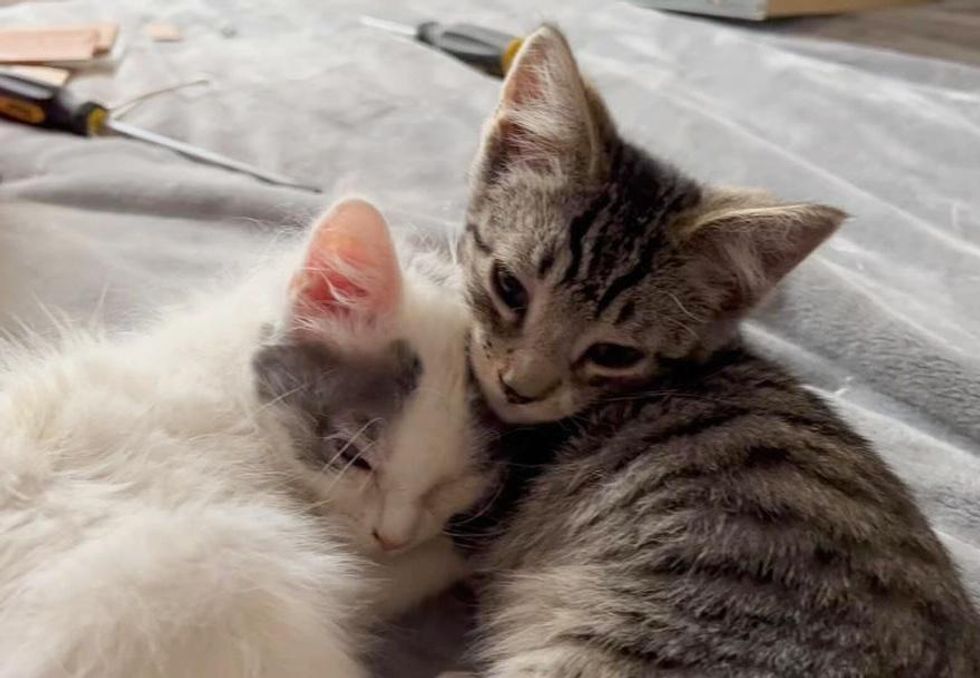 Related story: Kitten Runs Up to Man and Jumps in His Arms When He Finds Her Under a Car

Why Does My Cat’s Tail Shake? I Discerning Cat