Kitten Spotted Underneath Homeowner’s Deck, is Welcomed in By a Cat and Raised as Her Own

A kitten was spotted underneath a homeowner’s deck. He was welcomed in by a cat and raised as her own.

One week ago, Cailey Seymour, the founder of Dorset Rescue Kittens, was notified about an orphaned grey tabby needing help. The kitten had somehow wandered his way underneath a deck, and kept crying for help until the homeowner, Pat, heard his plea.

It took Pat a while to locate the kitten, and once she found him, she was determined to get him to safety. “She ripped her deck apart in the pouring rain to get him out. When she got to us with the kitten, he was extremely thin and malnourished, and had a horrible eye infection,” Cailey told Love Meow.

“When we asked her if she had a name in mind for him, she told us ‘Danny’ after her late husband who built the deck. She went above and beyond to rescue the little one.” 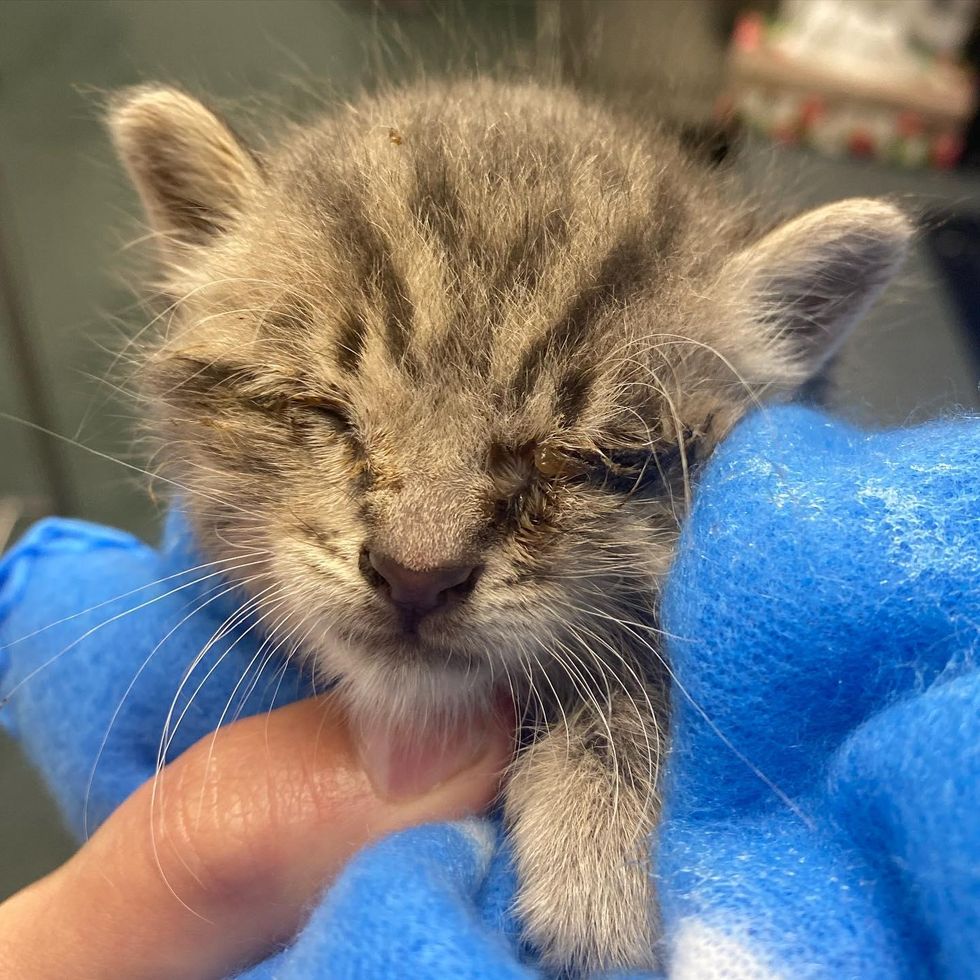 Danny was found underneath a deck all aloneDorset Rescue Kittens

Cailey immediately placed the kitten on antibiotics and eye drops and started bottle feeding him around the clock. After a few days of critical care and plenty of TLC, Danny bounced back and quickly learned to eat like a champ.

“We knew he was a fighter right off the bat. After making it through the first night, we knew Danny wanted to live. He was so affectionate and cuddly,” Cailey shared with Love Meow. 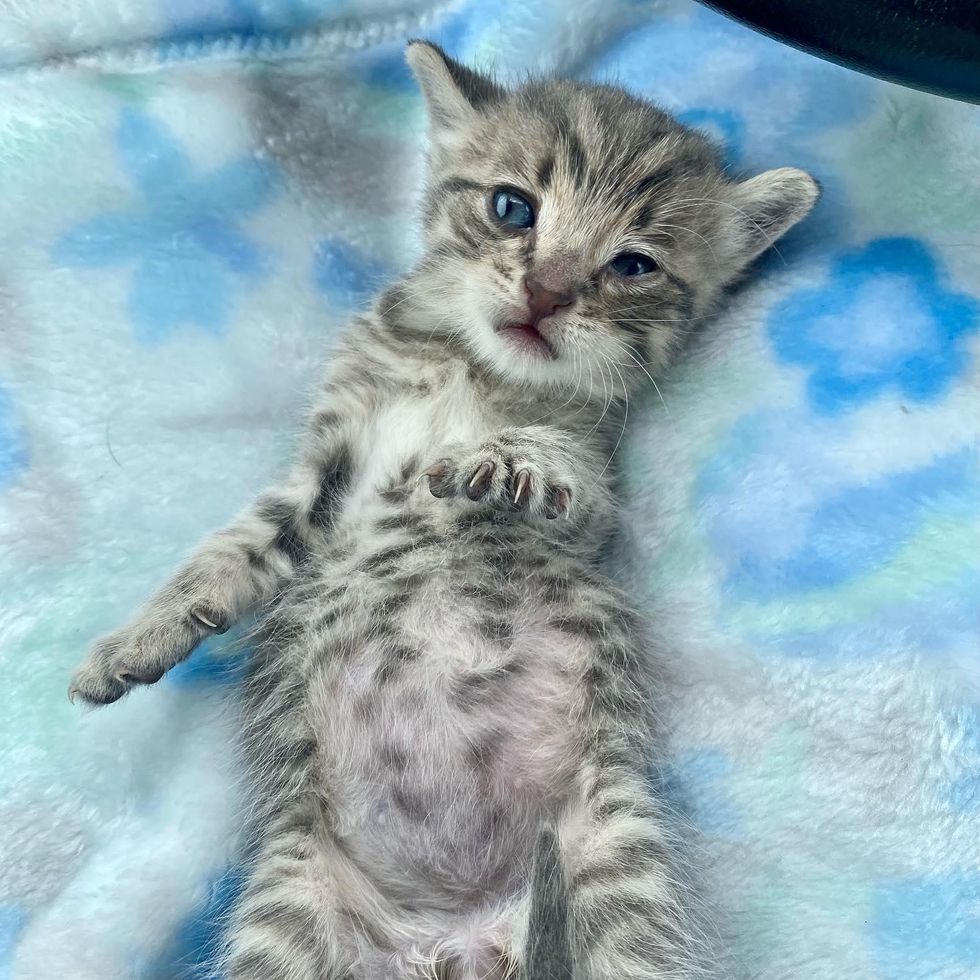 Once the kitten was feeling better and had more energy, he started playing more roughly. Danny was adamant about having his human’s undivided attention, and it was clear that he needed playmates to socialize with.

“He liked to ‘play’ by lunging and biting hands. Singleton kittens have a difficult time learning appropriate play and interactions without kitten siblings.” 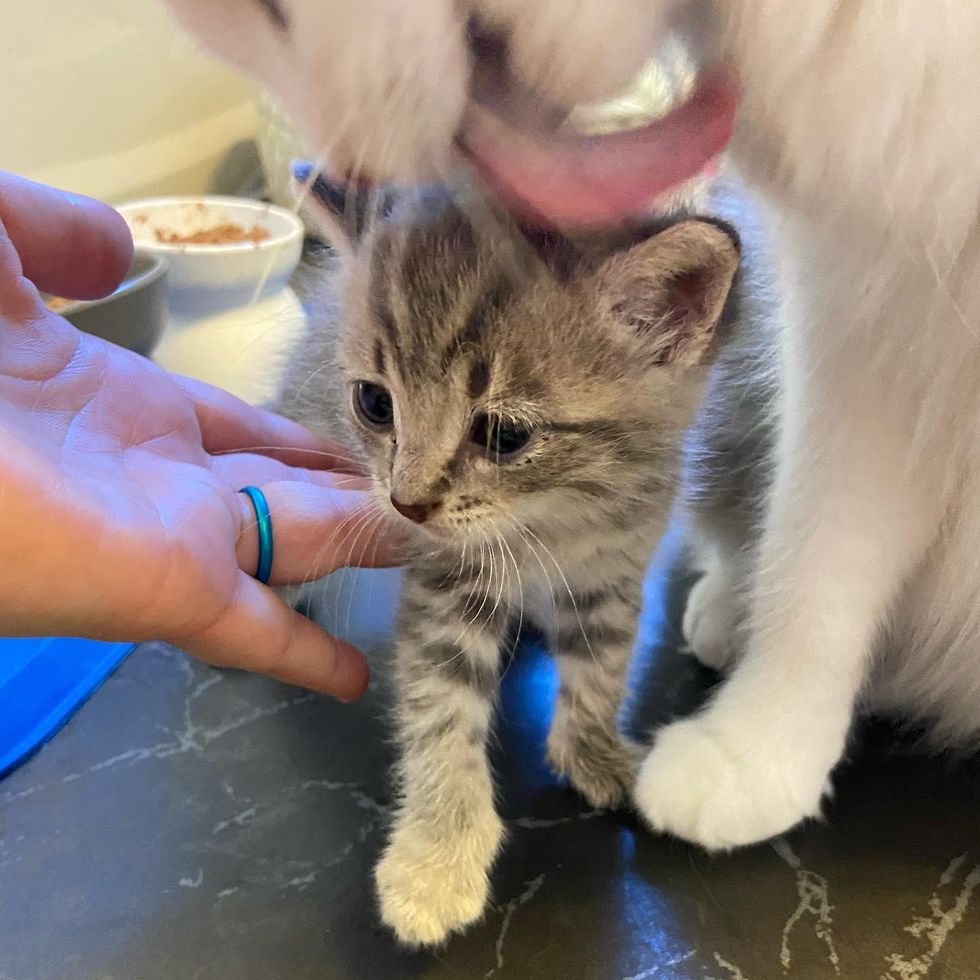 Betty the cat took Danny in as her ownDorset Rescue Kittens

Cailey knew just the perfect feline family to introduce Danny to. She had taken in a mother cat along with her kittens from a gentleman who needed some help with his cats.

“We worked with him to agree on the rescue taking in the cat mother to raise her babies in our care, and we would return mama to him, spayed and vet checked to prevent her from having future litters.” 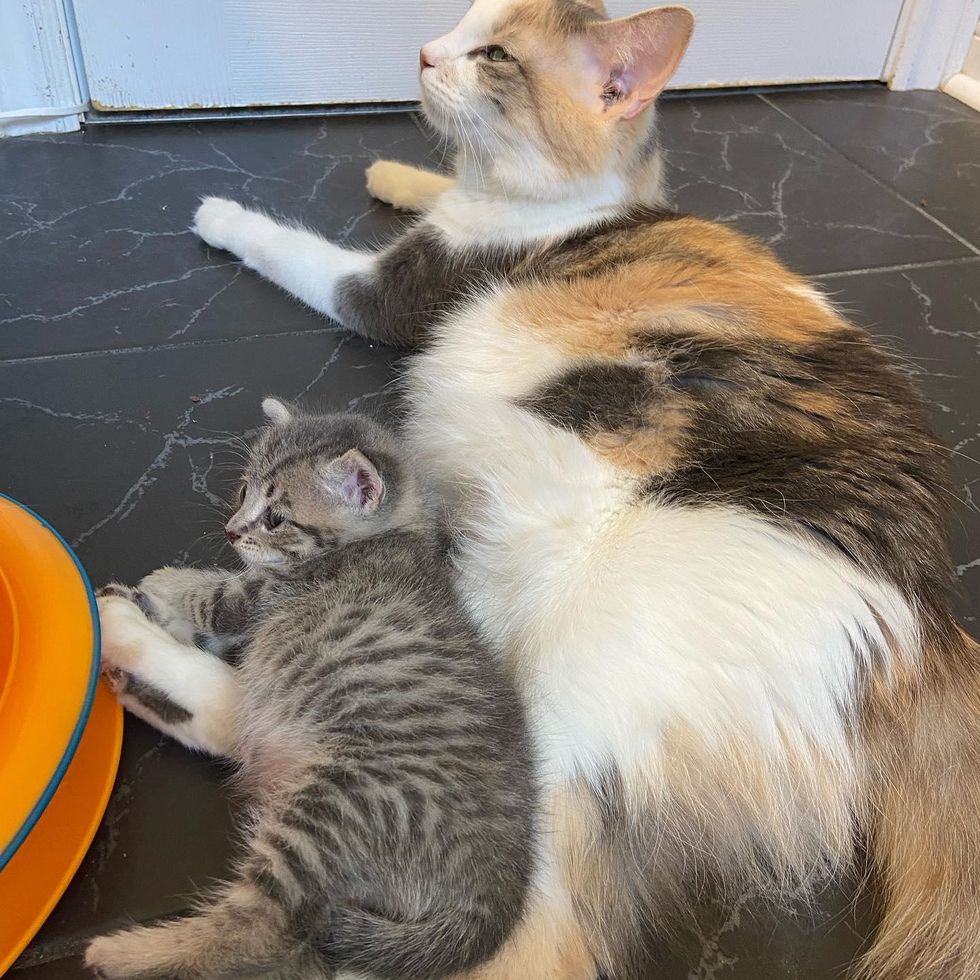 The cat named Betty took one look at Danny and immediately came running to him. She began grooming and caring for him like he was her own.

“Betty adored Danny, and she never questioned him. She loves him from the moment she met him.” 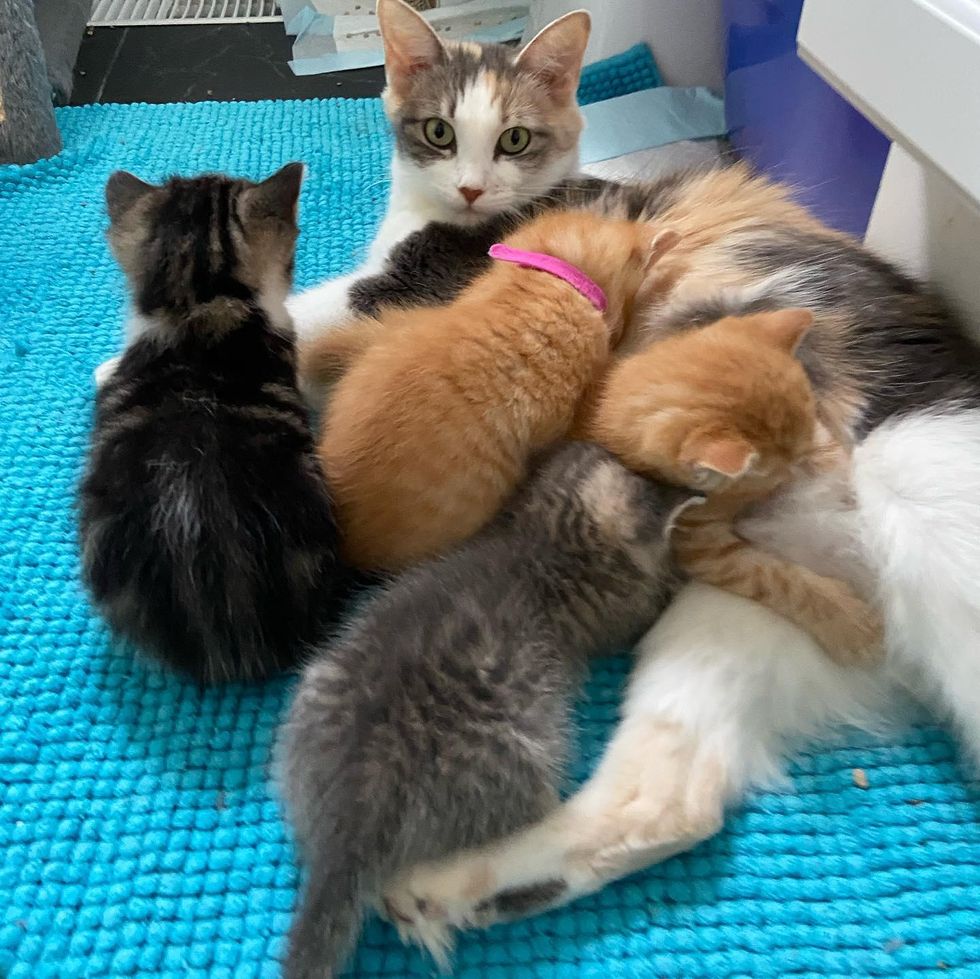 The little addition didn’t know what to make of the outpouring of affection from his new family, and even attempted to elude Betty’s motherly love in the beginning.

But it didn’t take long before Danny was found nuzzling on Betty’s belly and melting into her. 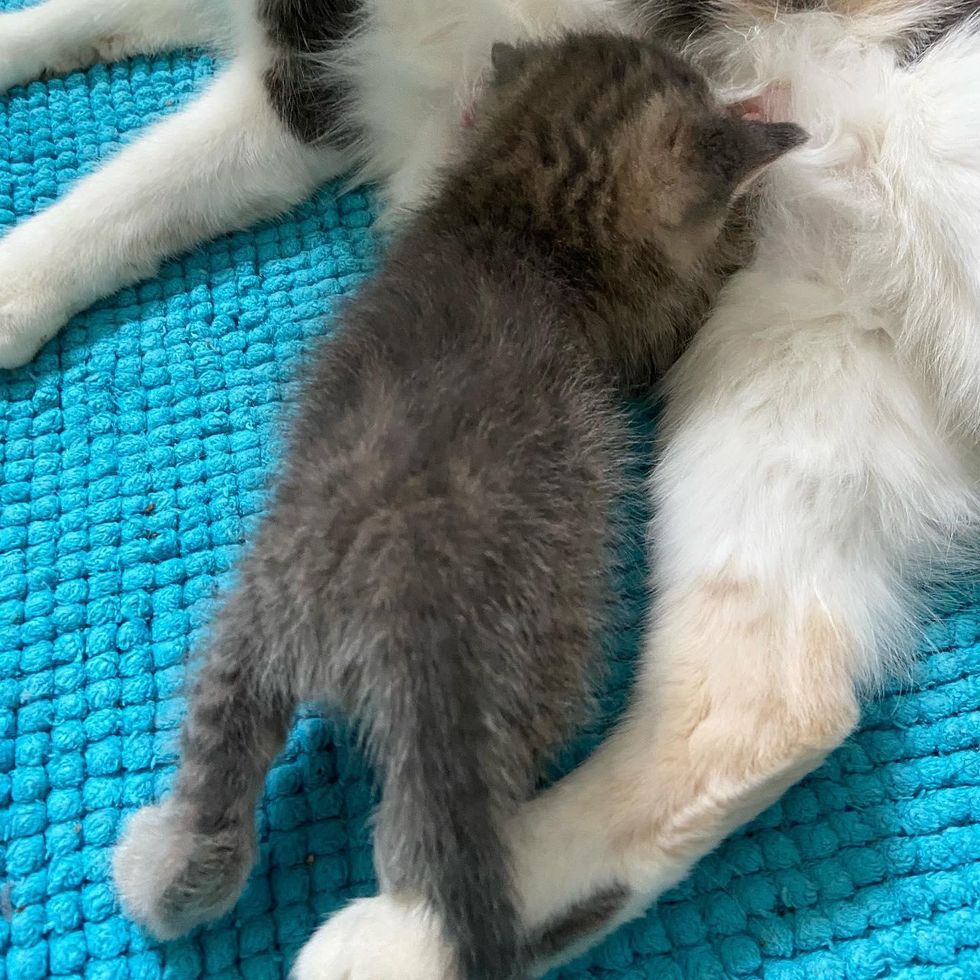 “The first day he joined them, Danny was contentedly chugging away at his bottle every three hours, but it only took him one night to figure out how to nurse from his adopted mom,” Cailey added.

“He was a bit bewildered at first by all the commotion of his new family, but he’s fitting in like one of the original members now.” 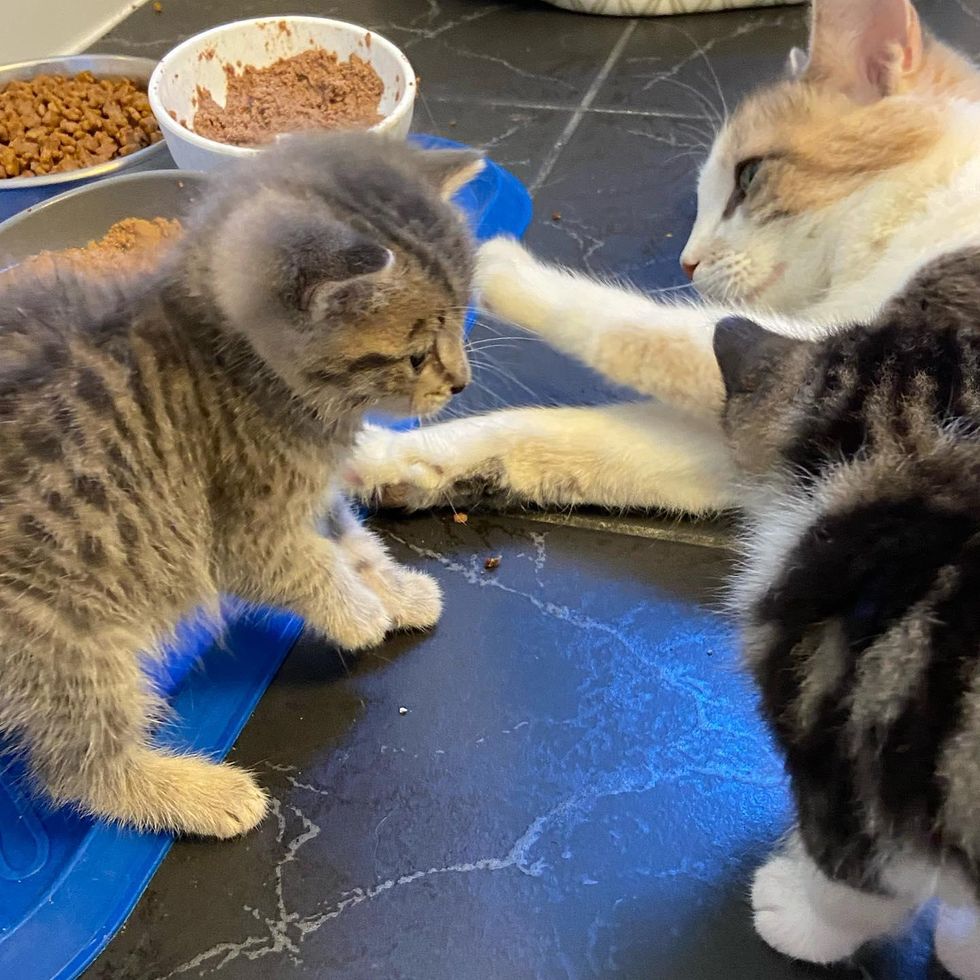 Betty is a rockstar mom for all of her kittens, catering to their every whim. Danny has been learning about boundaries through play with his siblings, and has accepted the fact that he can’t escape from Mom’s mandatory baths.

“Betty is such a great mother and her owner is so happy to know that she is doing a great job raising her babies, and took in an orphan as well.” 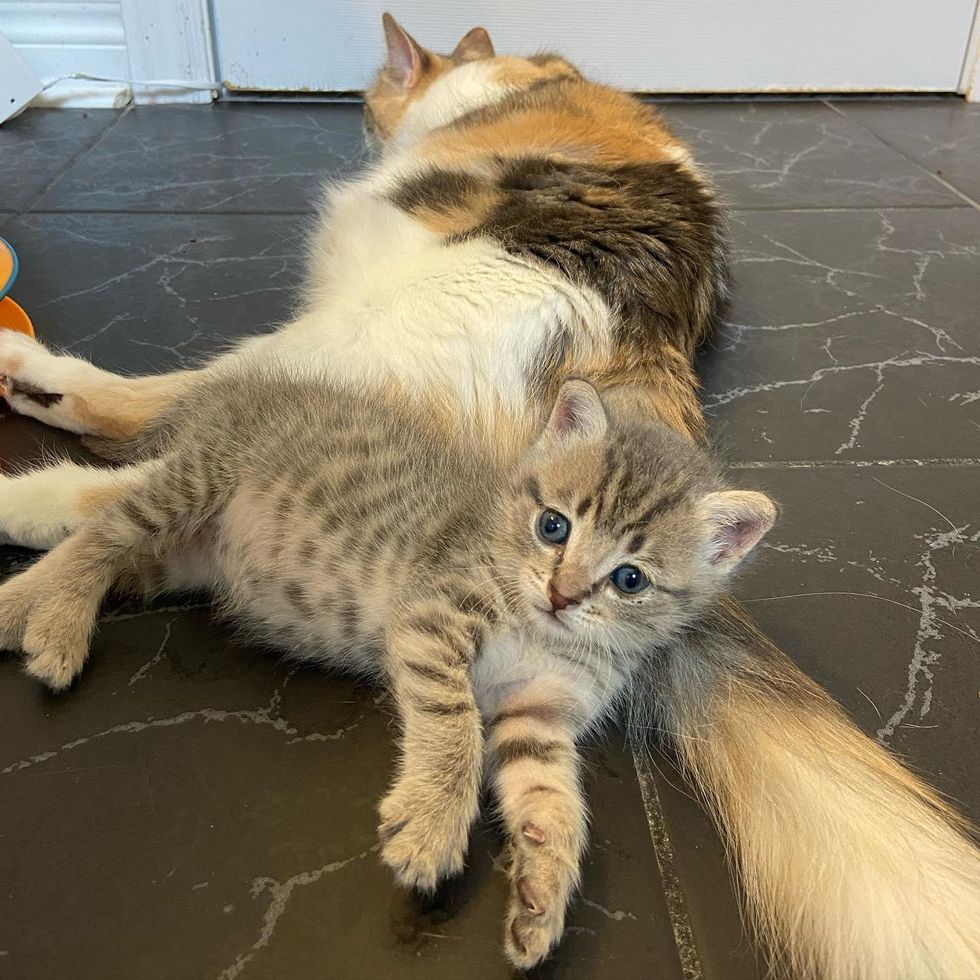 The tiny kitten who was rescued from underneath a deck, now has a feline family to curl up with, and a great future in store for him. 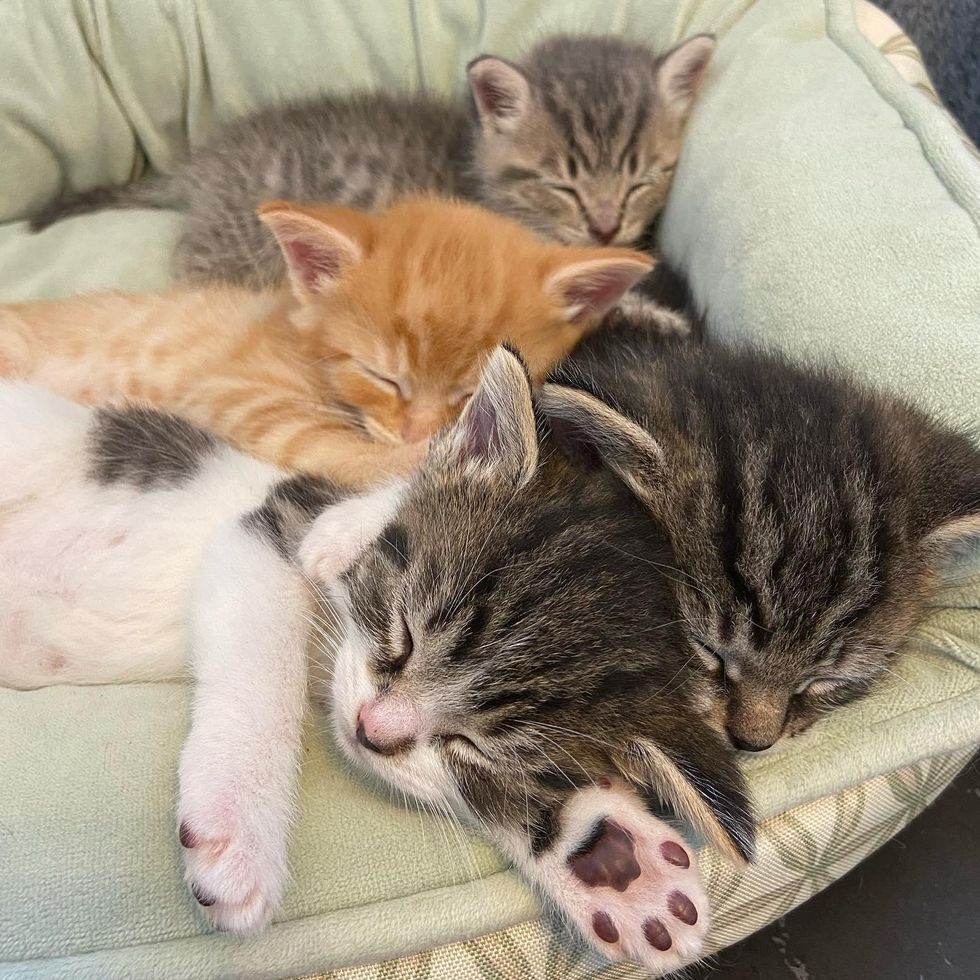 Can Cats See Color? Learn All About Cat Vision

Cats Work Side by Side to Care for 6 Kittens, a Blended Family, with the Help of Kind People