A family cat took over parenting duties for an abandoned kitten and never left his side.

Kurt the kitten and Quinn the catMelissa

Early this month, Amy was contacted by one of her neighbors about an abandoned kitten needing help. She had previously rescued a kitten, and word got out. When another cat in need was found, the neighbor reached out to her.

She picked up the orange tabby named Kurt and immediately started supplying heat. “I warmed him up on a heating pad and gave him a bottle,” Amy told Love Meow.

One of her friends, Melissa, offered to foster the kitten when Amy had to leave town. Little did she know that Kurt was about to receive the warmest reception at home. 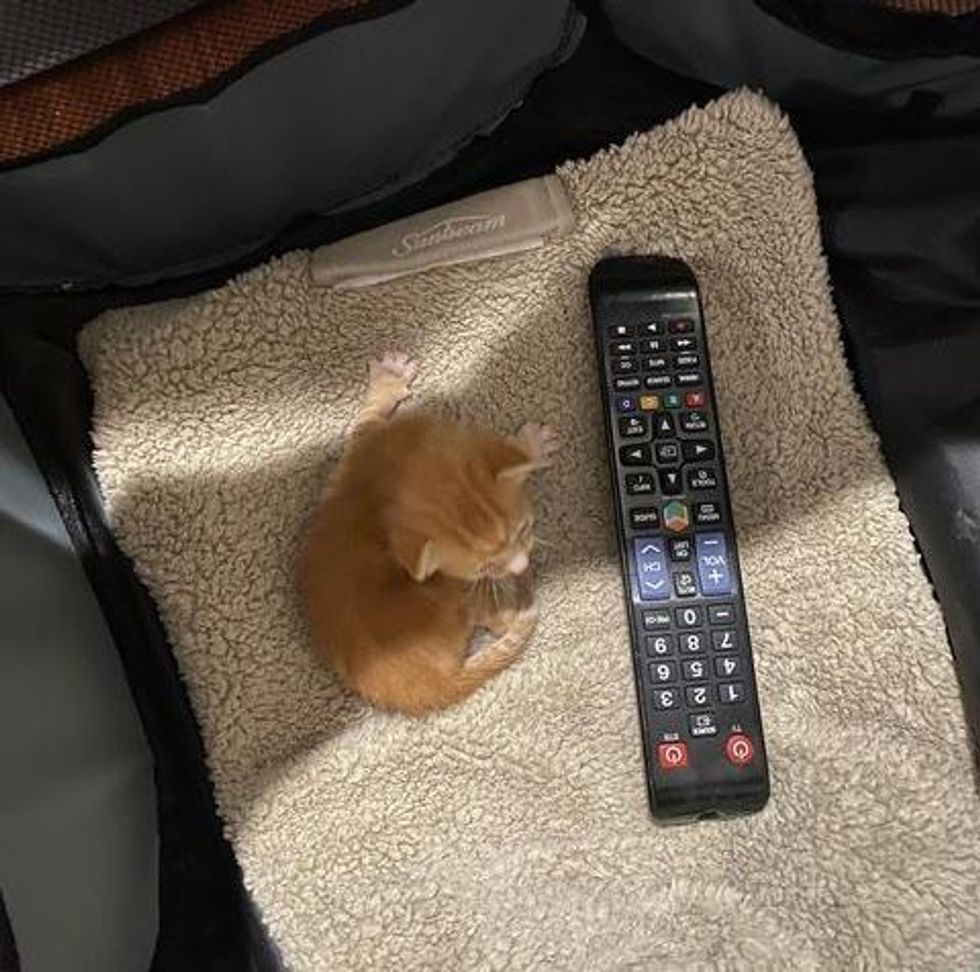 Kurt was found abandoned outside

“When we got him, he weighed just seven ounces. His ears weren’t up all the way, and he was really dehydrated. He was entirely dependent on us for everything,” Melissa told Love Meow.

“The next morning after he had some kitten formula, he started to look and act a lot better.” 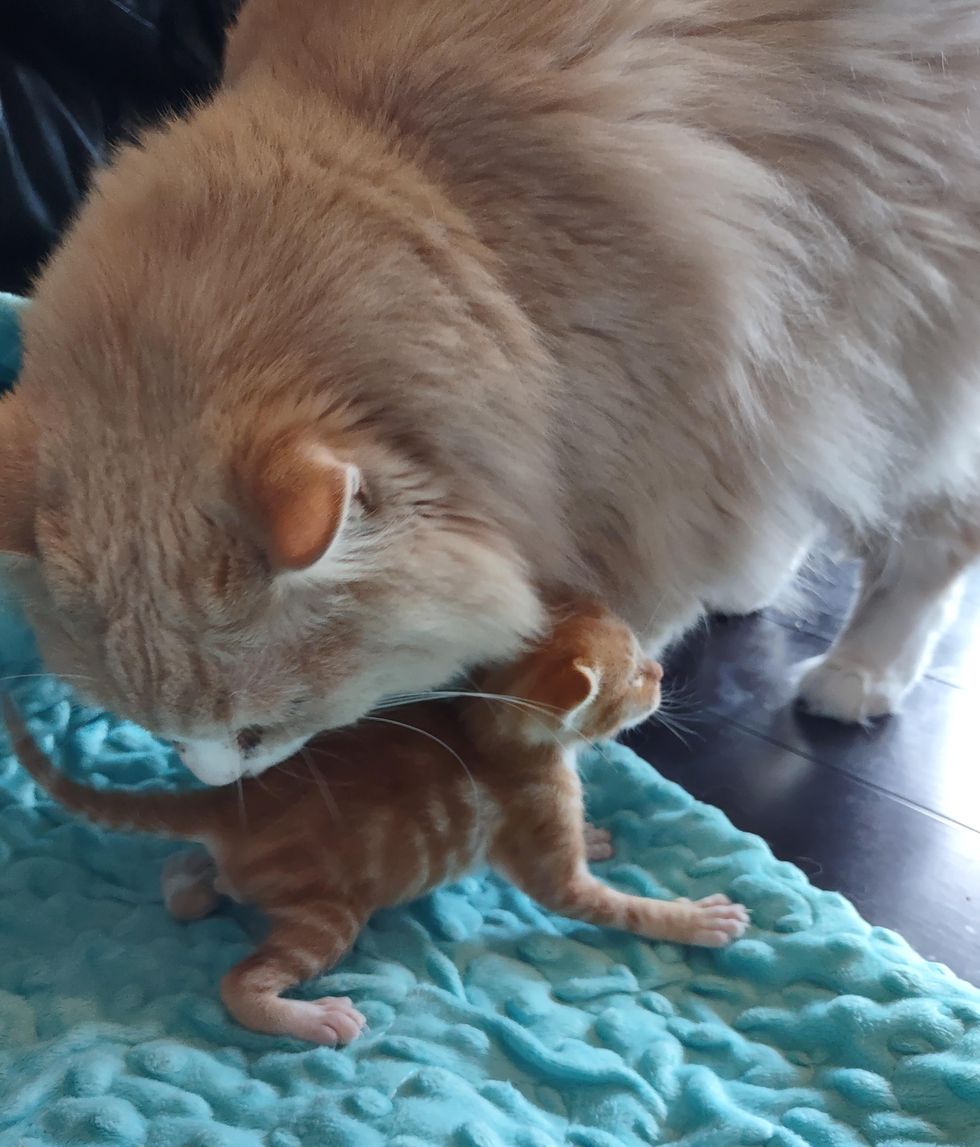 Quinn the resident cat took the kitten into his careMelissa

Quinn, the resident cat, quickly caught wind of the little newcomer in the house, and was anxious to meet him. Meanwhile, Kurt the singleton was eager for a constant companion.

The family carefully introduced the kitten to Quinn, and were amazed by what ensued. “Quinn started by smelling Kurt and circling around his carrier. Eventually he started to guard the carrier by sitting in front of it.” 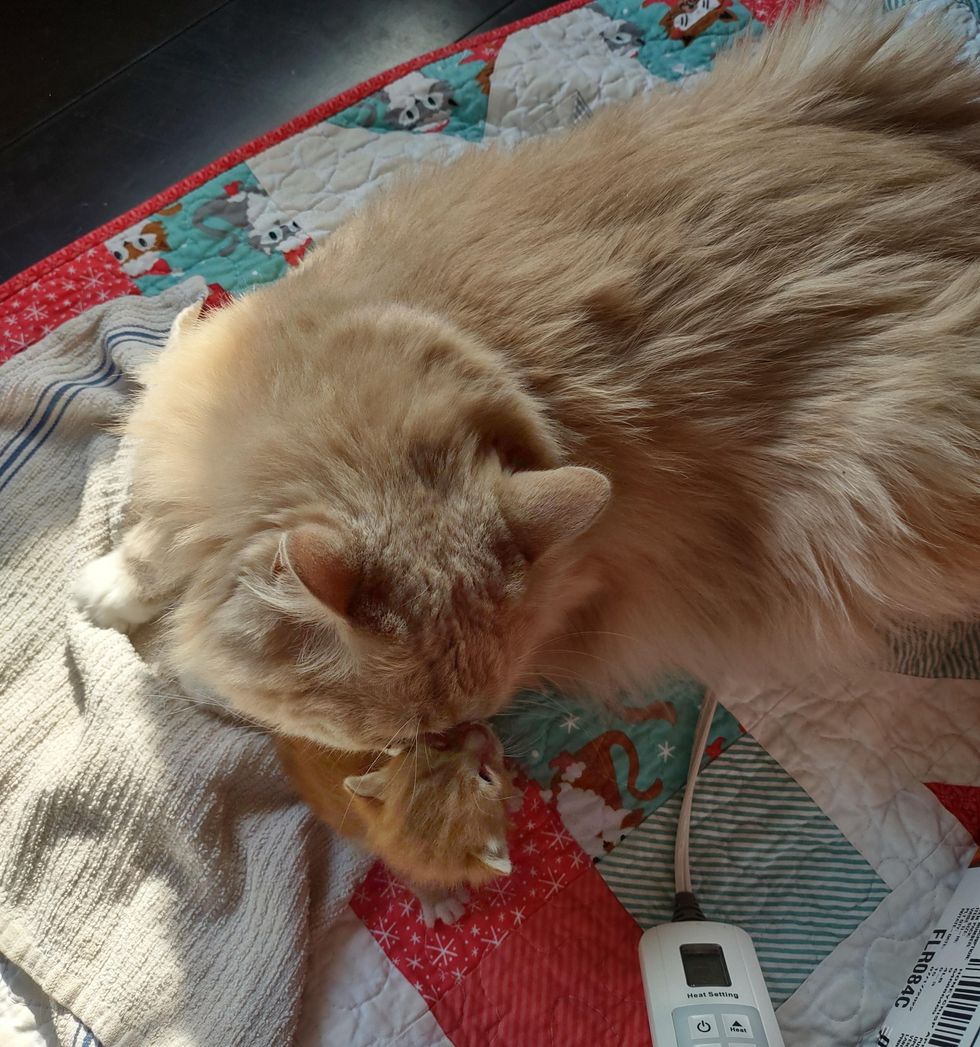 The house cat even attempted to turn the carrier around with his paw, so he could get a better look at the new kitten. “When we took Kurt out, Quinn sat next to him and gave him a bath. Kurt snuggled up to Quinn right away.”

“We eventually put Kurt in a large box because Quinn kept trying to jump onto the top of the carrier.” 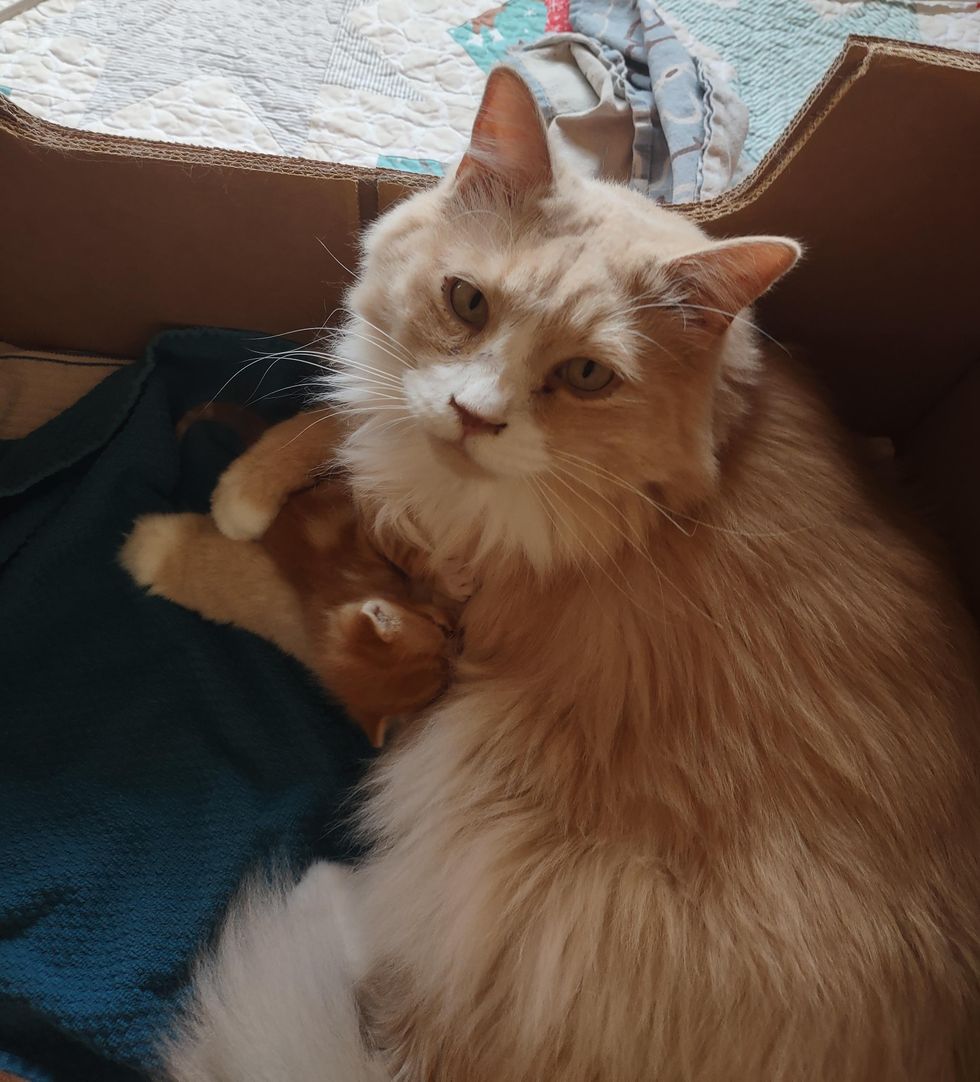 He is always in the nest with KurtMelissa

They quickly found Quinn curled up next to the tiny orange tabby with his arms around him. Kurt completely melted into Quinn and fell fast asleep in his arms.

Quinn has always had a soft spot for kittens in need. When Melissa brings home a rescued kitten to look after, Quinn insists on offering a helping paw. 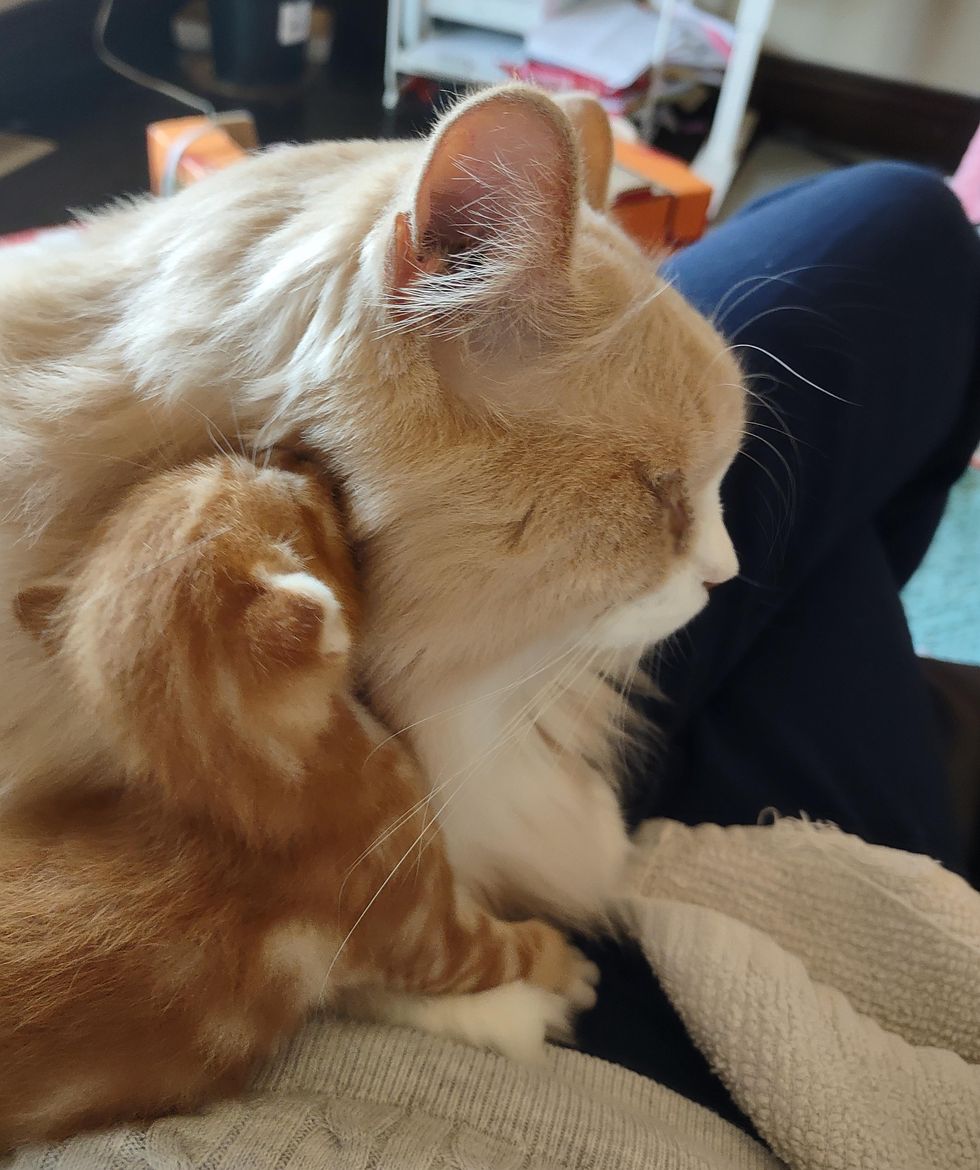 Kurt adores Quinn and thinks he is “mom”Melissa

“He always meows at us nonstop until we let him in to see the kittens. From there, he watches over them. He will stand by their box, bathe them, and sit next to them to keep them warm.”

There is no exception with Kurt as Quinn has taken over parenting duties and started grooming him and watching his every move. 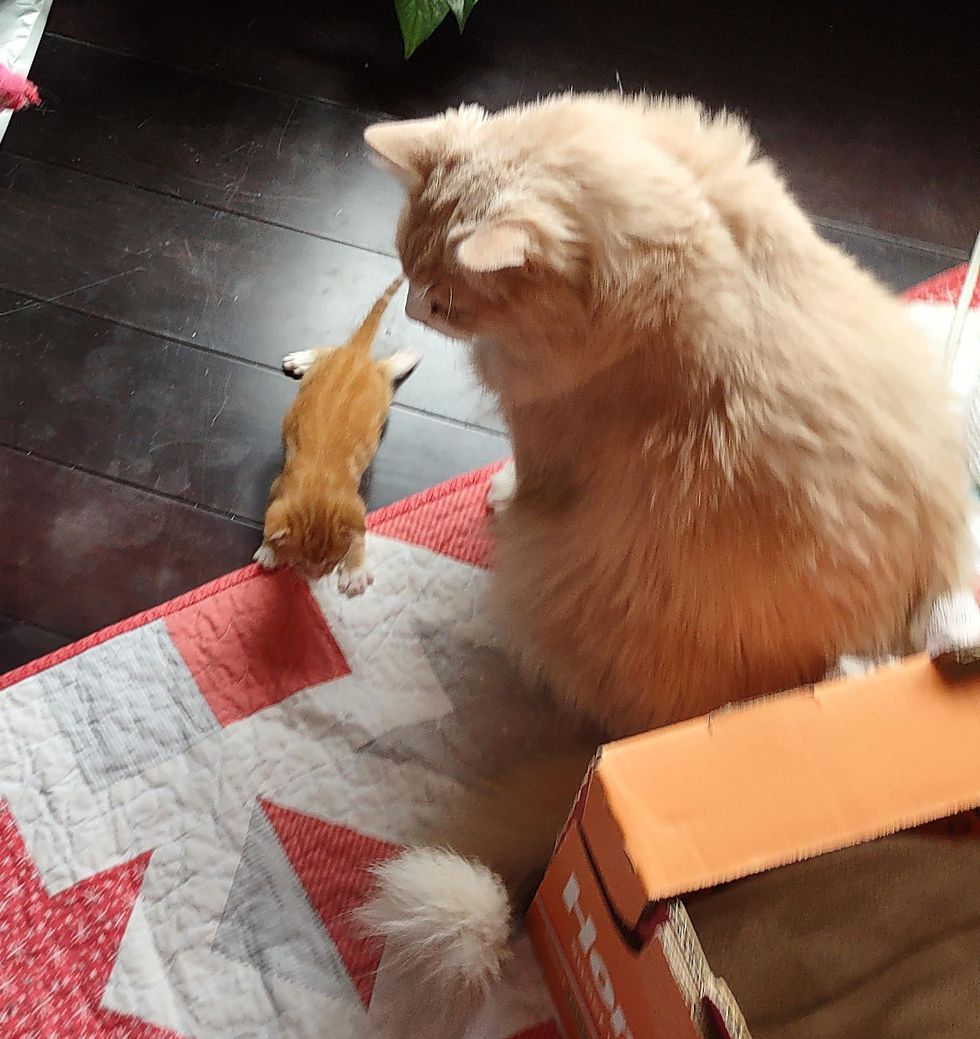 Kurt adores his big foster brother and will nuzzle up to him and try to nurse. “He often looks for Quinn around the room when he can’t find him and then meows at me,” Melissa shared with Love Meow.

“They have a really amazing bond. They are so different in size and age, but they hang out together most of the day.” 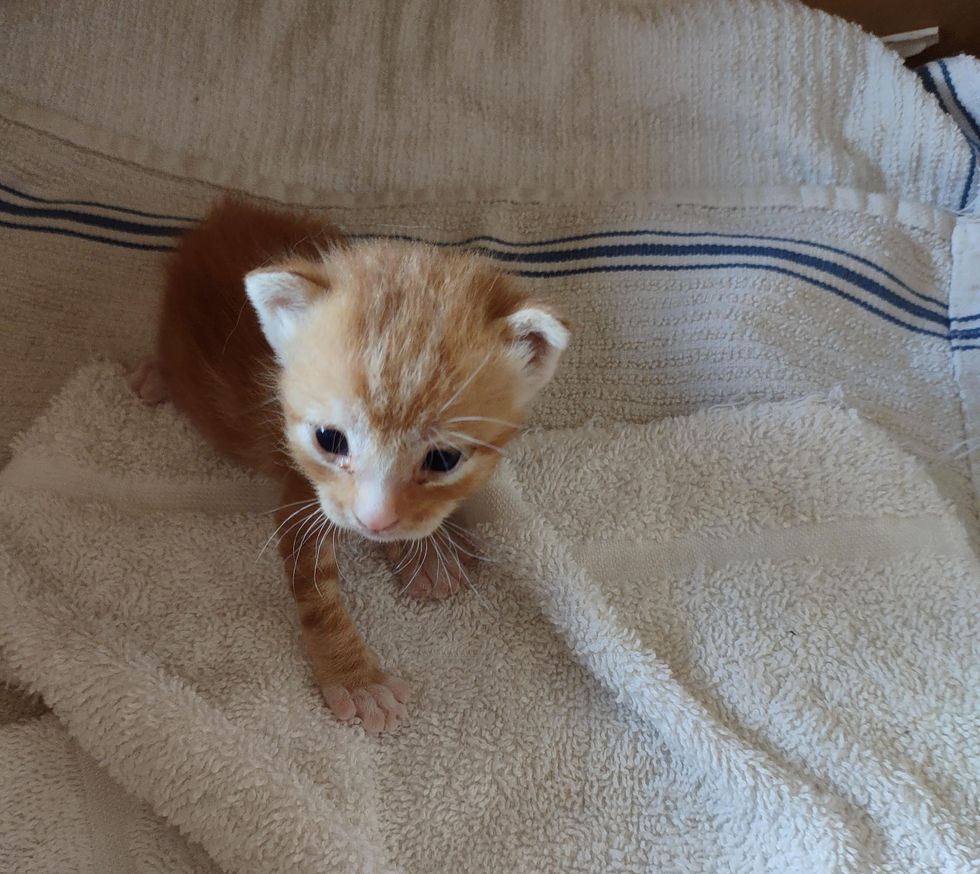 “Kurt feels safe when he is with Quinn, and Quinn feels like a protector. If we have the kitten in another room, Quinn will go and sit in his box to keep it warm and wait for him to come back.”

Quinn likes to put his paw on the little guy to make sure he doesn’t wander off too far. 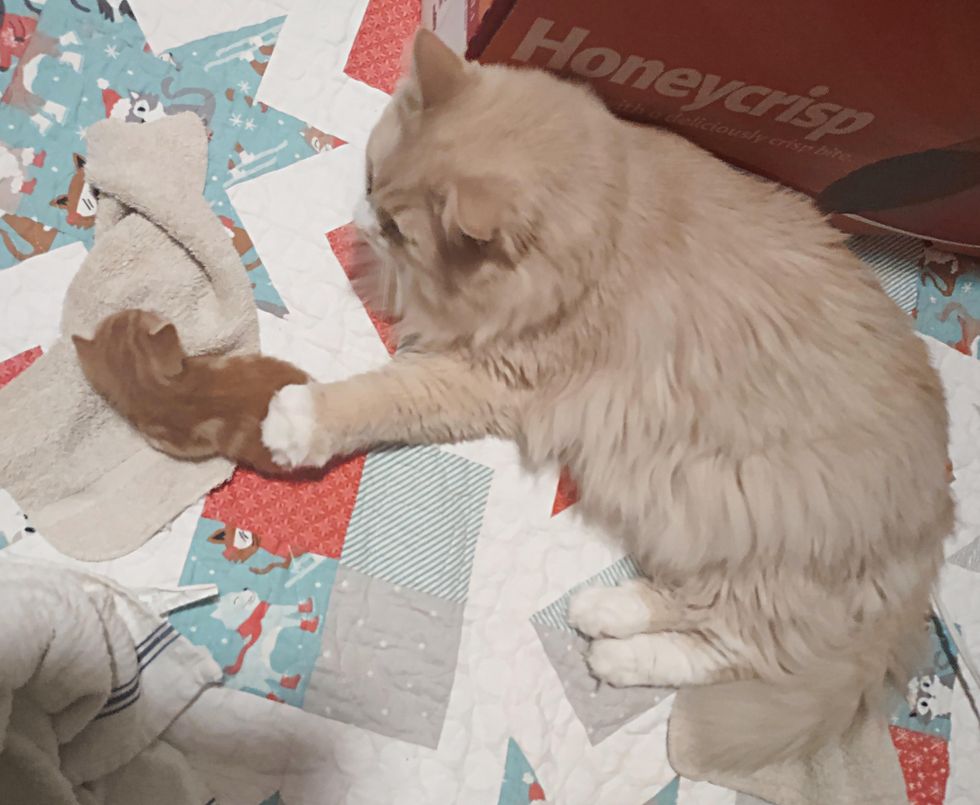 Quinn is a protective foster brotherMelissa

“Sometimes when I leave Kurt out of his box to walk around, I come back into the room and Quinn will have lifted him back into his box to sleep.” 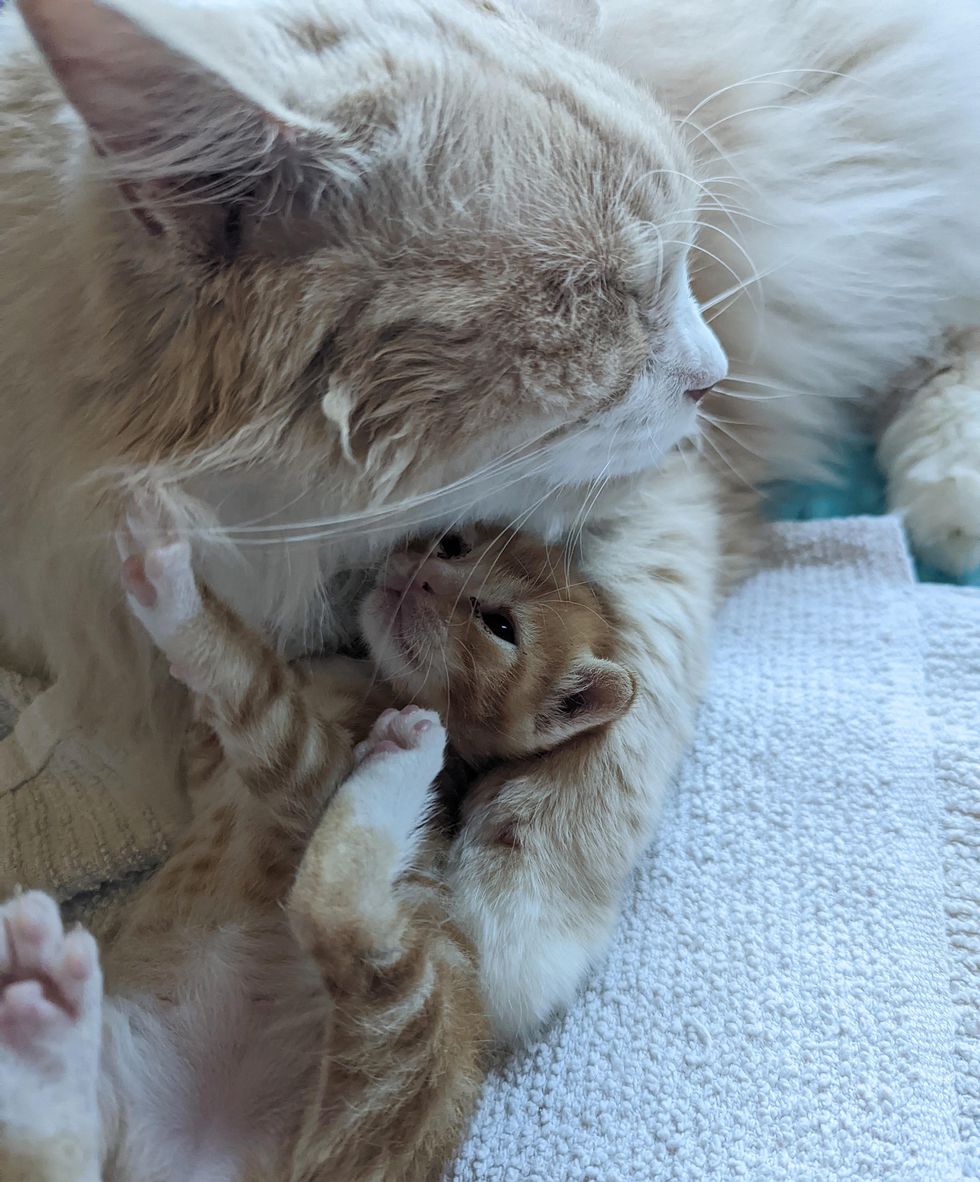 Related story: Kitten Found on Roadside During Rain Gains Confidence and Decides to Help Other Cats in Need