Cat Taken into a Rescue for Help, a Few Days Later She Brings 6 Kittens into the World

A cat arrived at a rescue for help. A few days later, she brought six kittens into the world.

Best Friends Felines, a cat rescue in Brisbane, AU, was contacted by a member of the public who needed assistance with her pregnant cat. The rescue agreed to take her into their Last Litter Program, help raise the kittens and find them homes.

“Once the babies are weaned, she will be desexed and returned to her owners,” Nikki of Best Friends Felines shared. “One of our carers picked up the cat named Rico. She was a little unsettled and unsure what was happening. But within 48 hours, she was doing roly-poly antics for tummy tickles and pats.”

Rico was pleased with all the amenities and food. Despite her belly bursting at the seams, she was able to jump up to the top platform of a cat tree, her favorite spot, until a few days later. 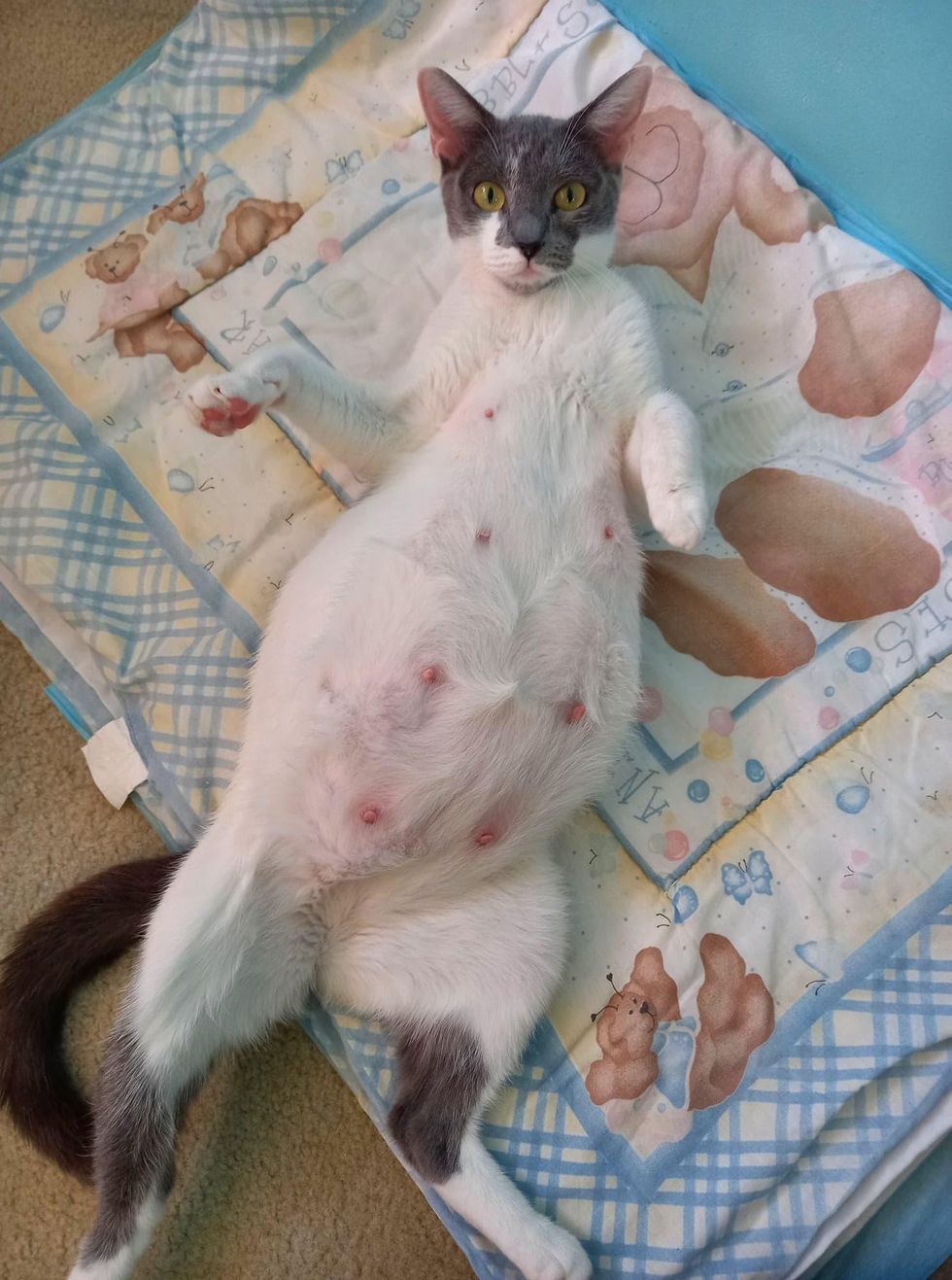 Rico dove right into mommy duties, feeding six hungry mouths and keeping them immaculately clean. She continued to seek affection from her foster carer, her main source of support, every time she came into the room. 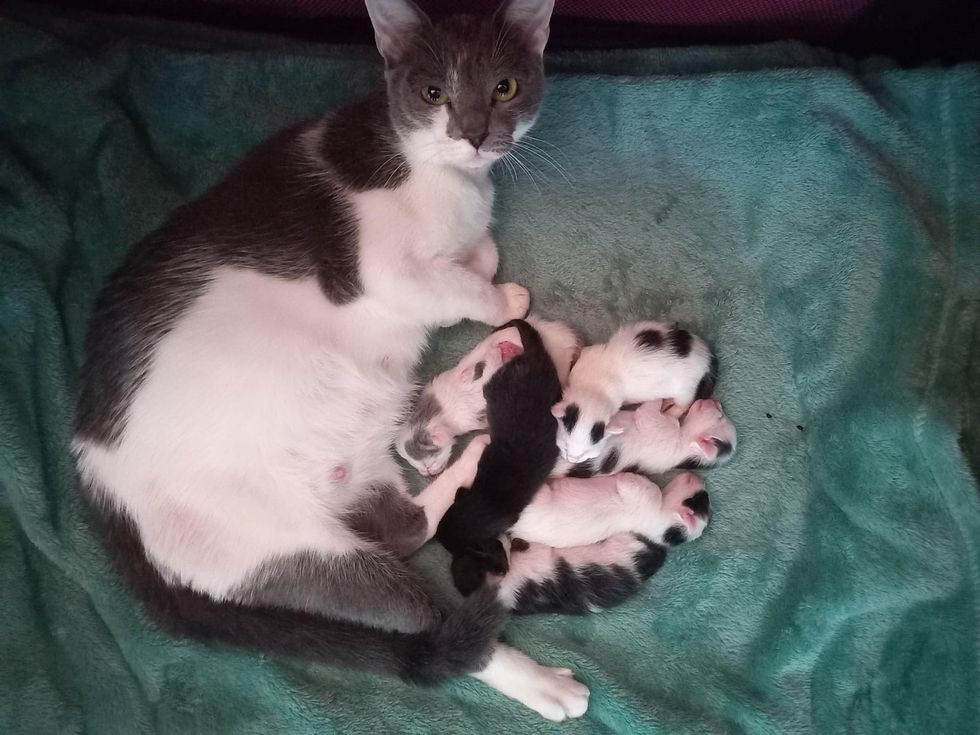 “She loves her cuddles and will come for pats, but rushes back to the babies if they make a peep as she is a wonderful and attentive mother.”

Rico stuck close to her kittens and rarely left their side for the first week. She wolfed down the food served in bed and was refueled throughout the day. 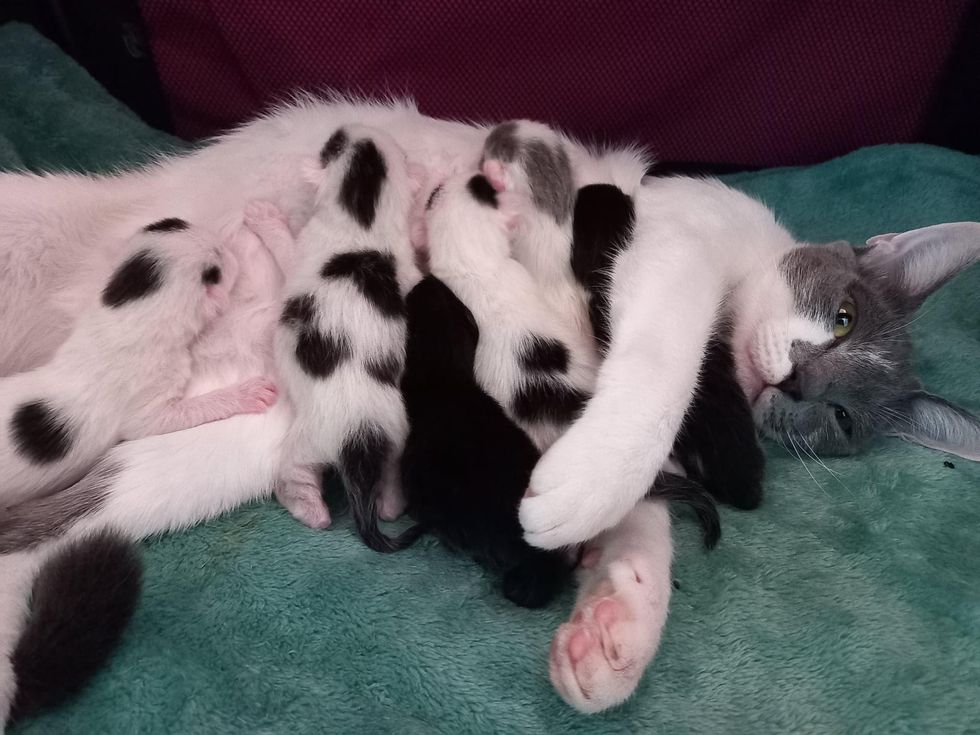 As time went by, she was coming out of her nest for more “me-time” and attention from her people, leaving her babies snoozing in a warm puddle.

“At seven days old, all six kittens had the cutest chunky little round bellies. Their eyes were just starting to open eager to see the world, but they were not up to much just yet.” 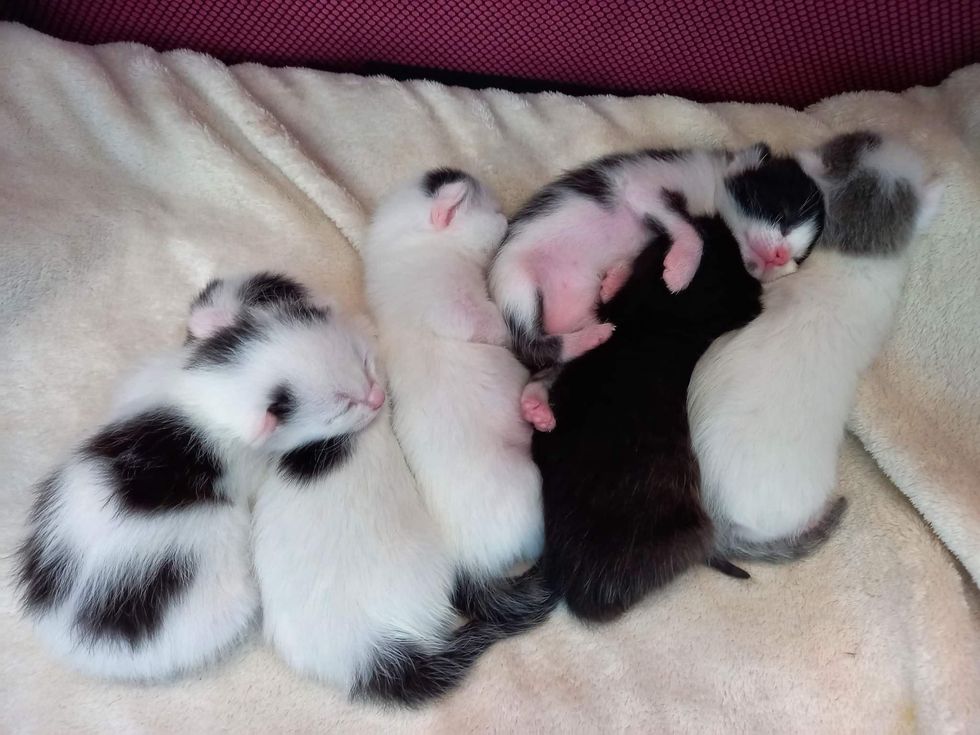 By the time they turned two weeks, one after another, the kittens were on the move. “They were changing from little wriggly jelly beans into tiny kittens. They were starting to hold their heads up, blinking wide little eyes at the world around them.”

Some of the kittens attempted their first steps by lifting their bellies off the ground, which was quickly followed by a roll-over tumble. 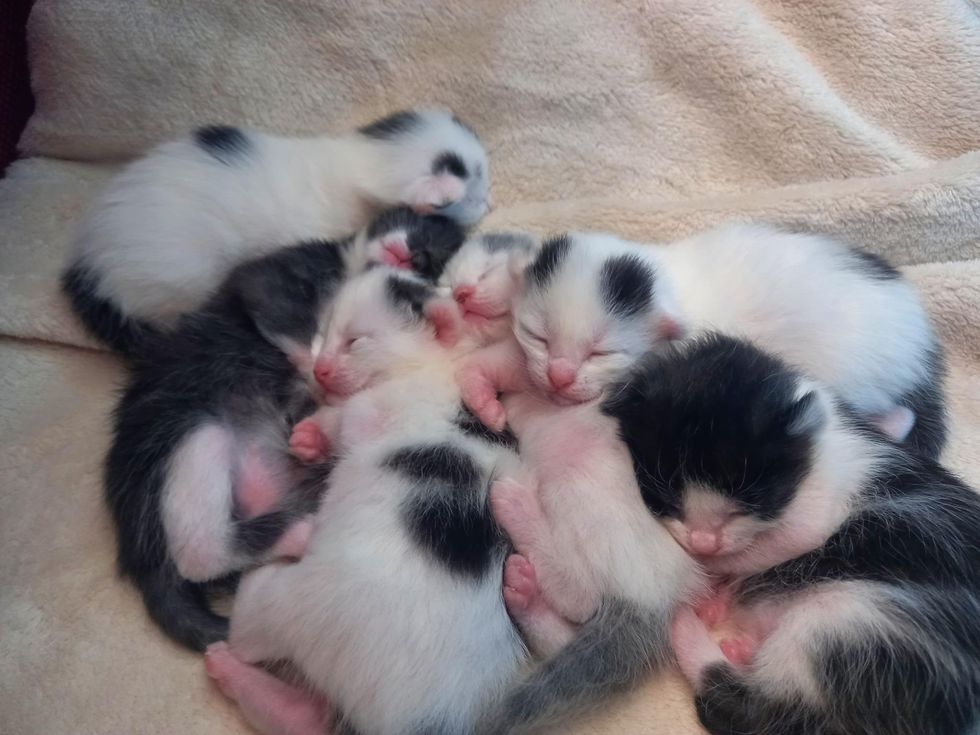 “They were experts at climbing Mt. Rico already. Mama often rolled chin up with them crawling all over.”

As soon as the kittens found their feet, they were ready to venture out of the bed. It was only a matter of days before they started tackling their room and discovered the art of zoomies. 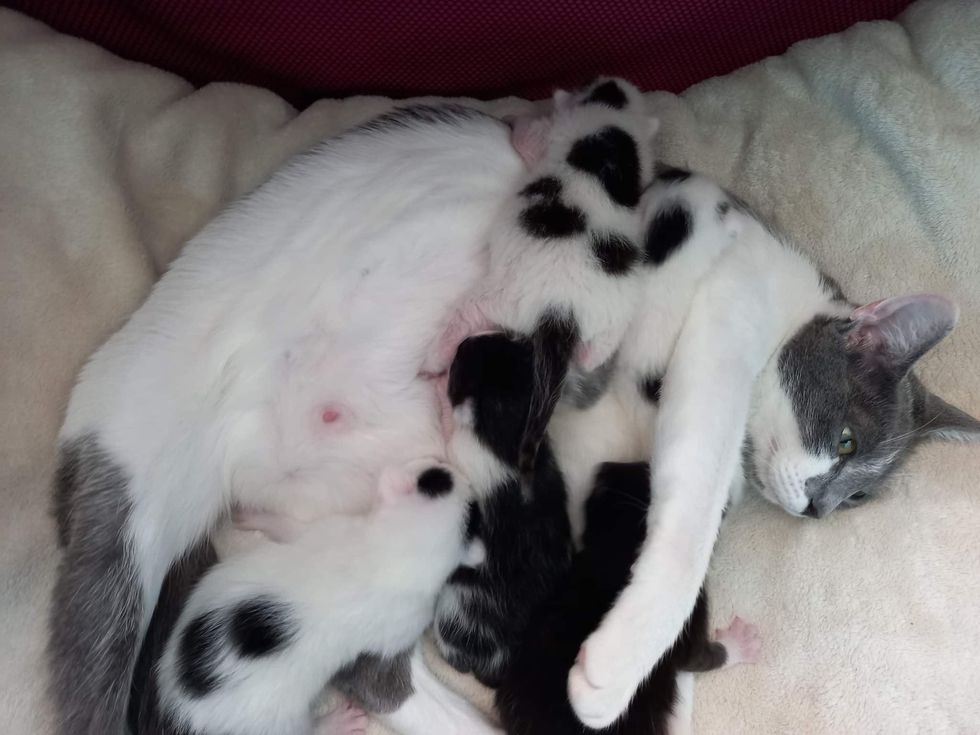 “Playing at this age is adorable, rolling around, waving legs in the air while taking gummy chomps at the nearest siblings’ ears, nose, face, whatever they can try to fit in their mouth,” the rescue wrote.

“It’s a wriggling pile of kittens, until slowly they start falling asleep, and it ends up as an adorable snuggle puddle.” 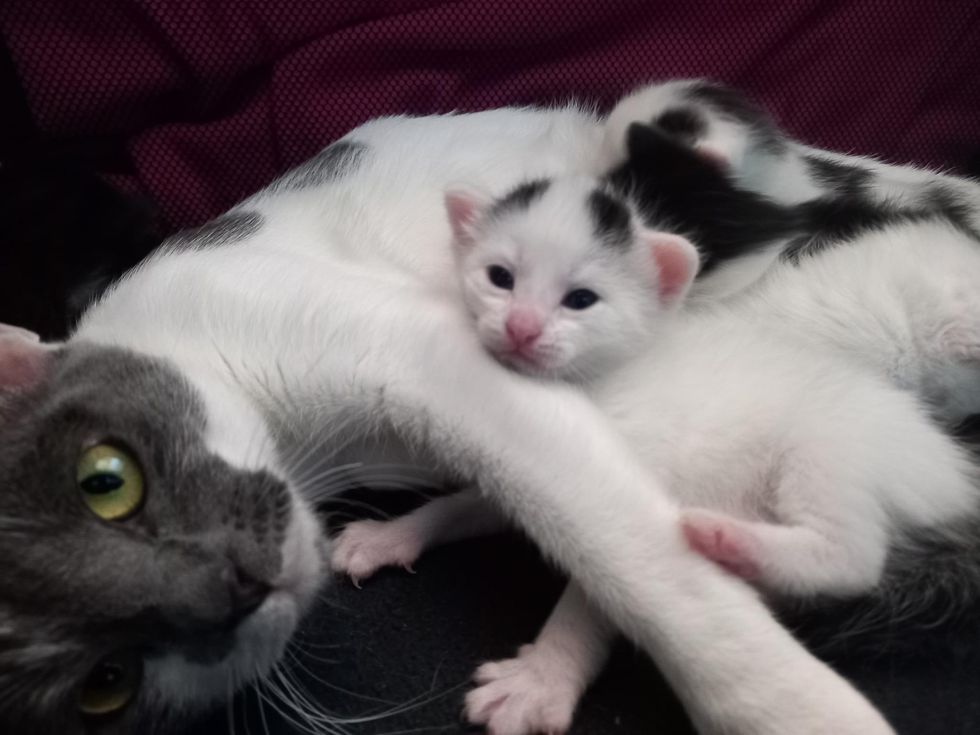 Just like that, the kittens are five weeks old to date and blossoming into playful, mischievous young cats.

“Their personalities are showing more and more, and we have some very snuggly babies emerging, between their bouts of crazy play, sprinting across the room, and darting up the cat tree.” 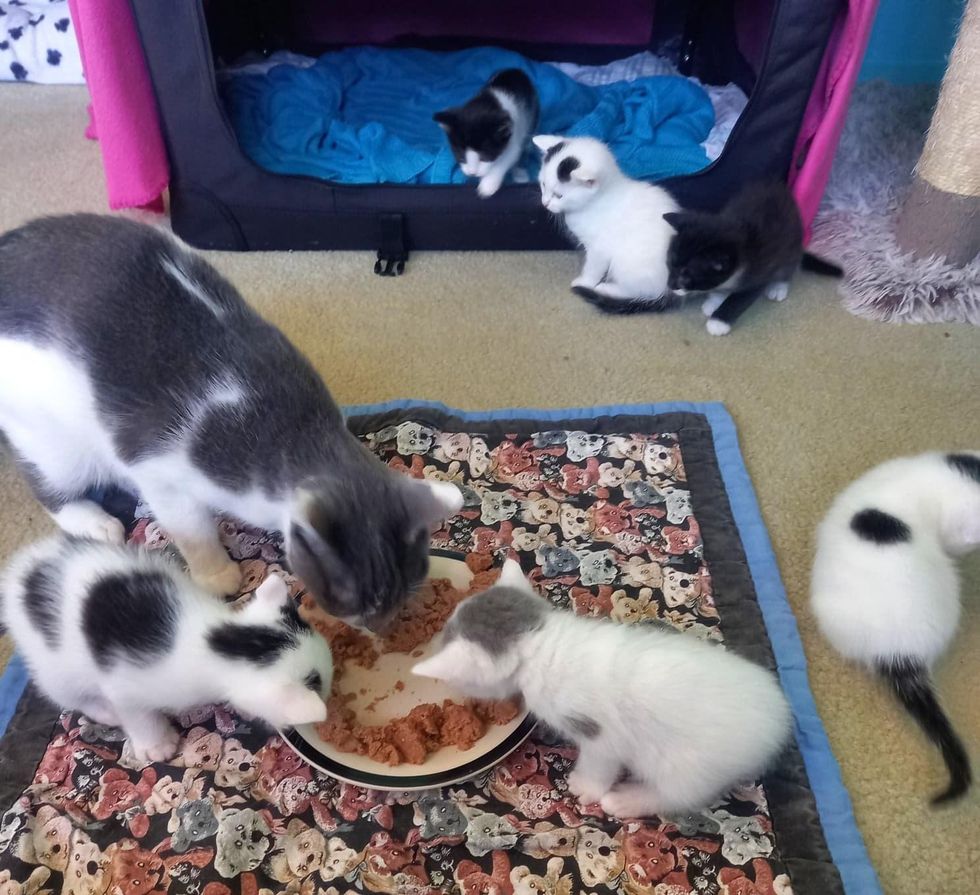 “They’ve dived into being big kittens and all are eating their wet food with gusto.”

With their confidence and independence increasing, Rico is spending more time on the sideline and taking every opportunity to be with her humans. 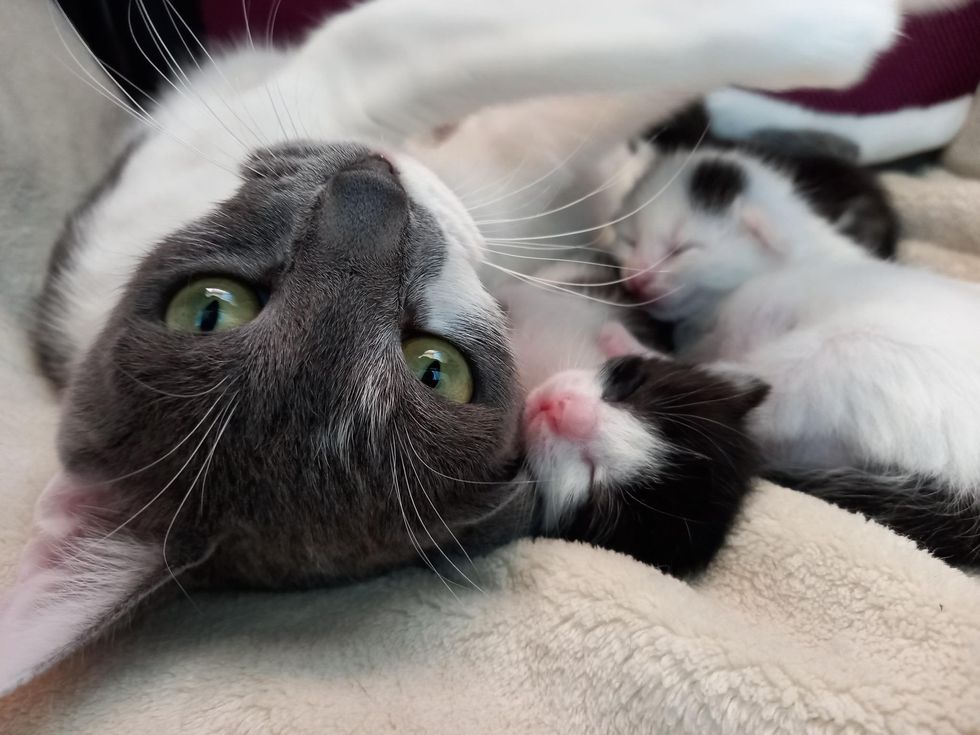 “Along with wandering all over their room, the kittens start to ditch the crate they’ve called bed since they were born, and bed down in random spots for the night.” 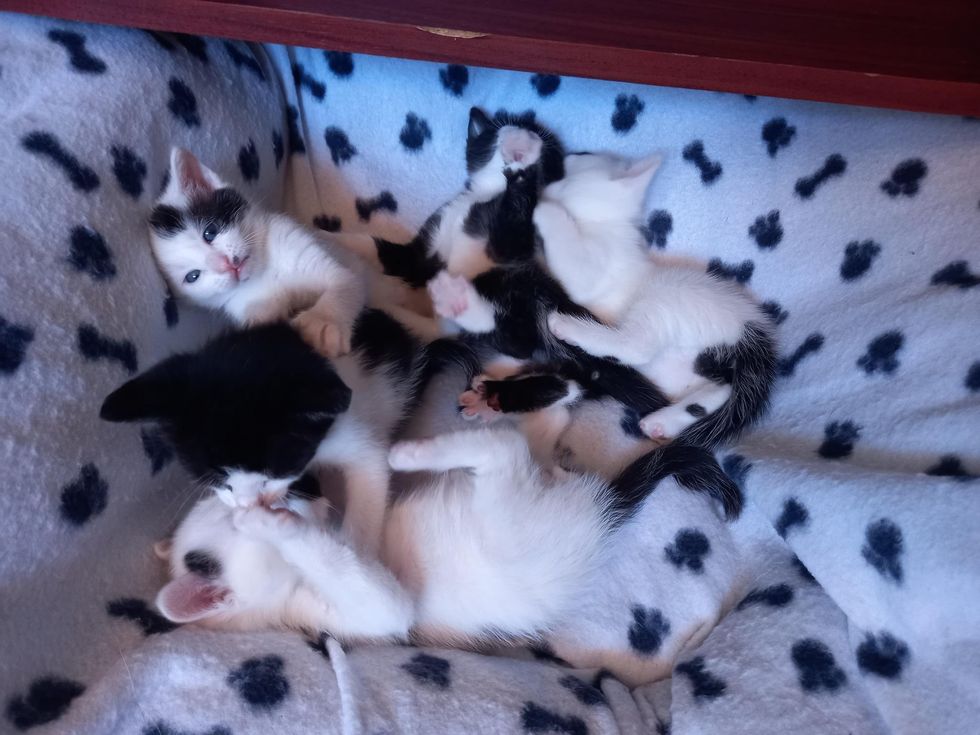 Rico is taking a backseat while her kittens are tearing through the room, reveling in their mischief-making or napping comfortably in their new sleeping arrangements.

“She is happy to lap up all the human attention she can before they wake up and come crying.” 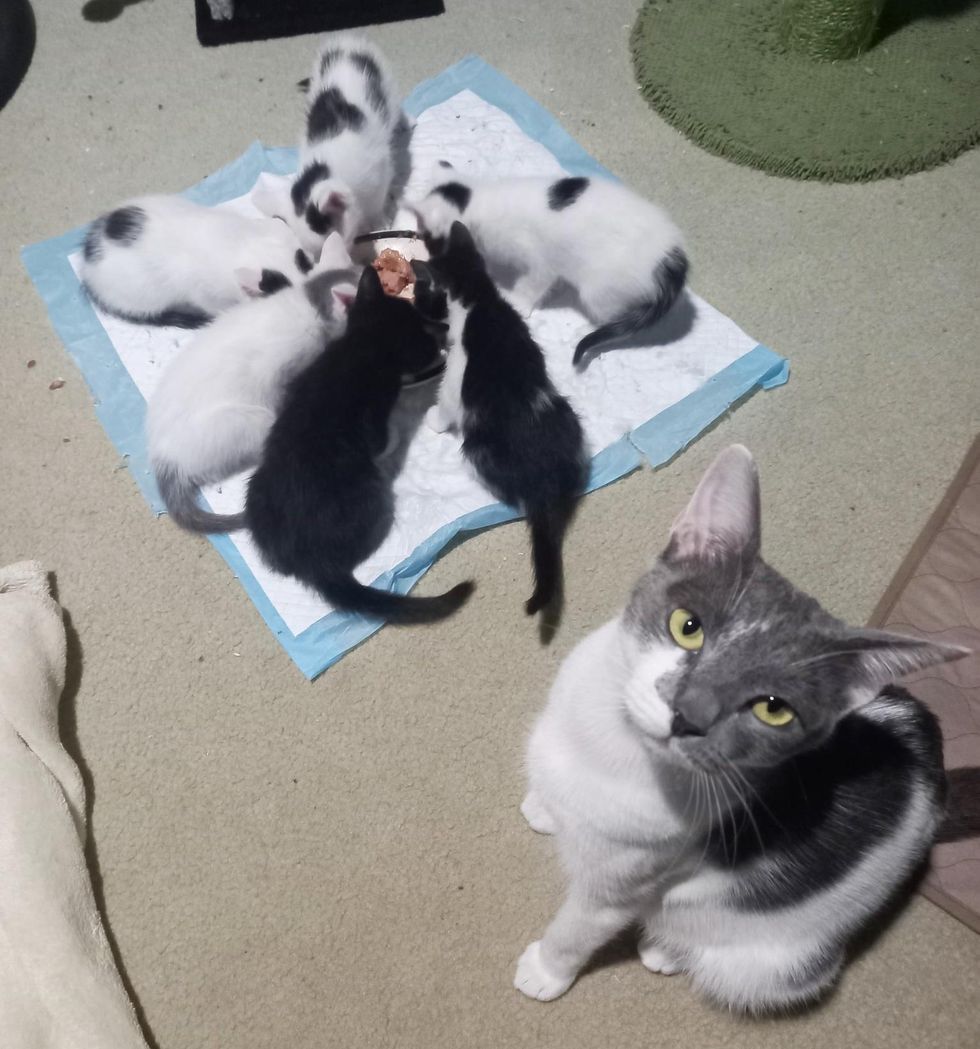 Related story: Man Crawls Under Sidewalk to Rescue 6 Kittens So They Can Have Better Lives