A kitten got help to fix his chest and returned the favor by helping other cats in need.

Sky the kitten was found wandering the streets of Los Angeles with a chin injury. Alley Cat Rescue took him into their care and got him medical attention right away.

The kitten underwent surgery to repair his chin and during that time, Sky had trouble breathing. Through X-rays, they discovered that he had an inward deviation of the sternum consistent with Pectus Excavatum, also known as funnel chest.

While his chin was healing and his upper respiratory infection was clearing up, Sky was preparing for yet another surgery to mend his chest. Despite all the challenges, the blue-eyed kitten was always in good spirits. 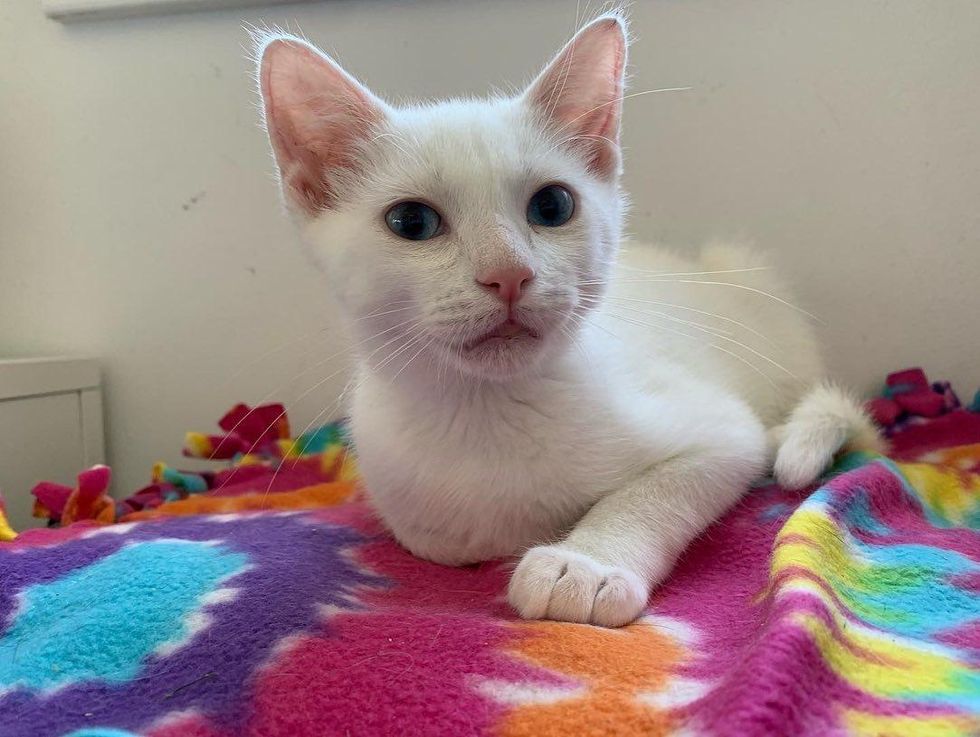 He constantly craved attention from people and filled the room with his happy rumbling purrs. “He is the sweetest little boy and purrs the moment you pet him,” Alley Cat Rescue shared with Love Meow.

He’d climb on his foster mom, look at her with those beautiful blues, and melt into her lap. 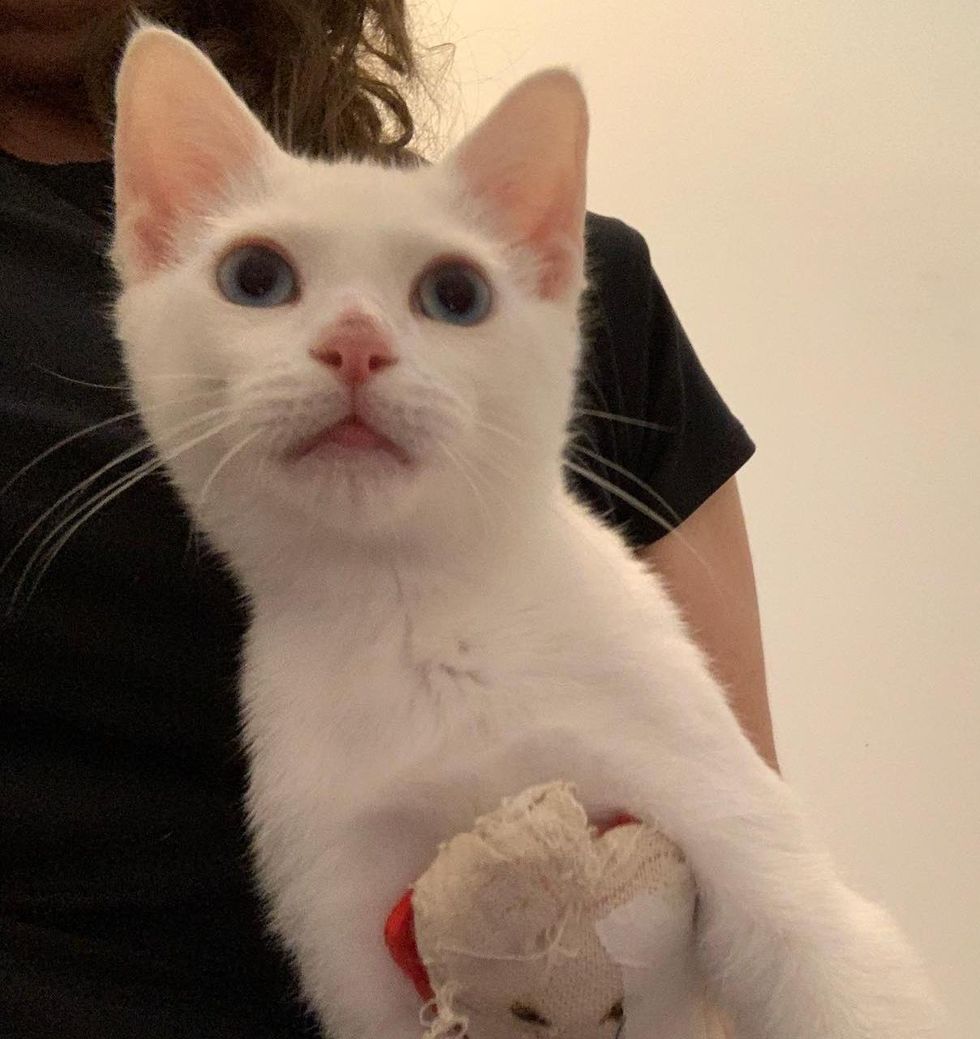 The surgery to treat his Pectus Excavatum was a success. After getting a full night of sleep post operation, Sky perked up with newfound strength and a voracious appetite. He even attempted to venture out of his playpen for an escapade.

“He just wants to climb on laps and cuddle. He has always been incredibly loving and sweet with everyone,” Alley Cat Rescue told Love Meow. 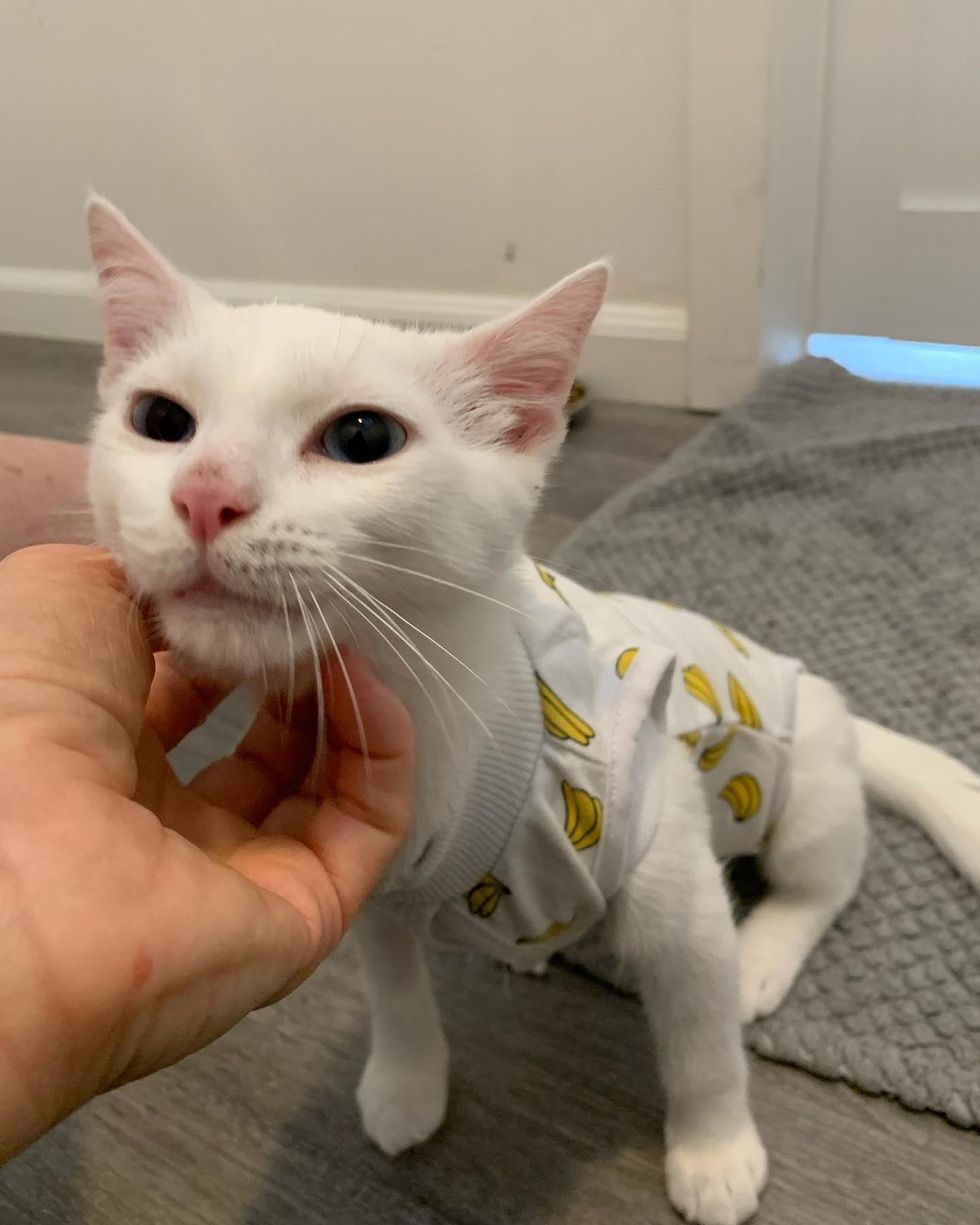 Sky donned a vest to keep his chest plate clean and secure while he was recovering. He was a champion wearing wraps around his body and continued to seek affection whenever his foster mom was present.

He had multiple snuggle sessions throughout the day, and in exchange, he provided the most soothing purrs. 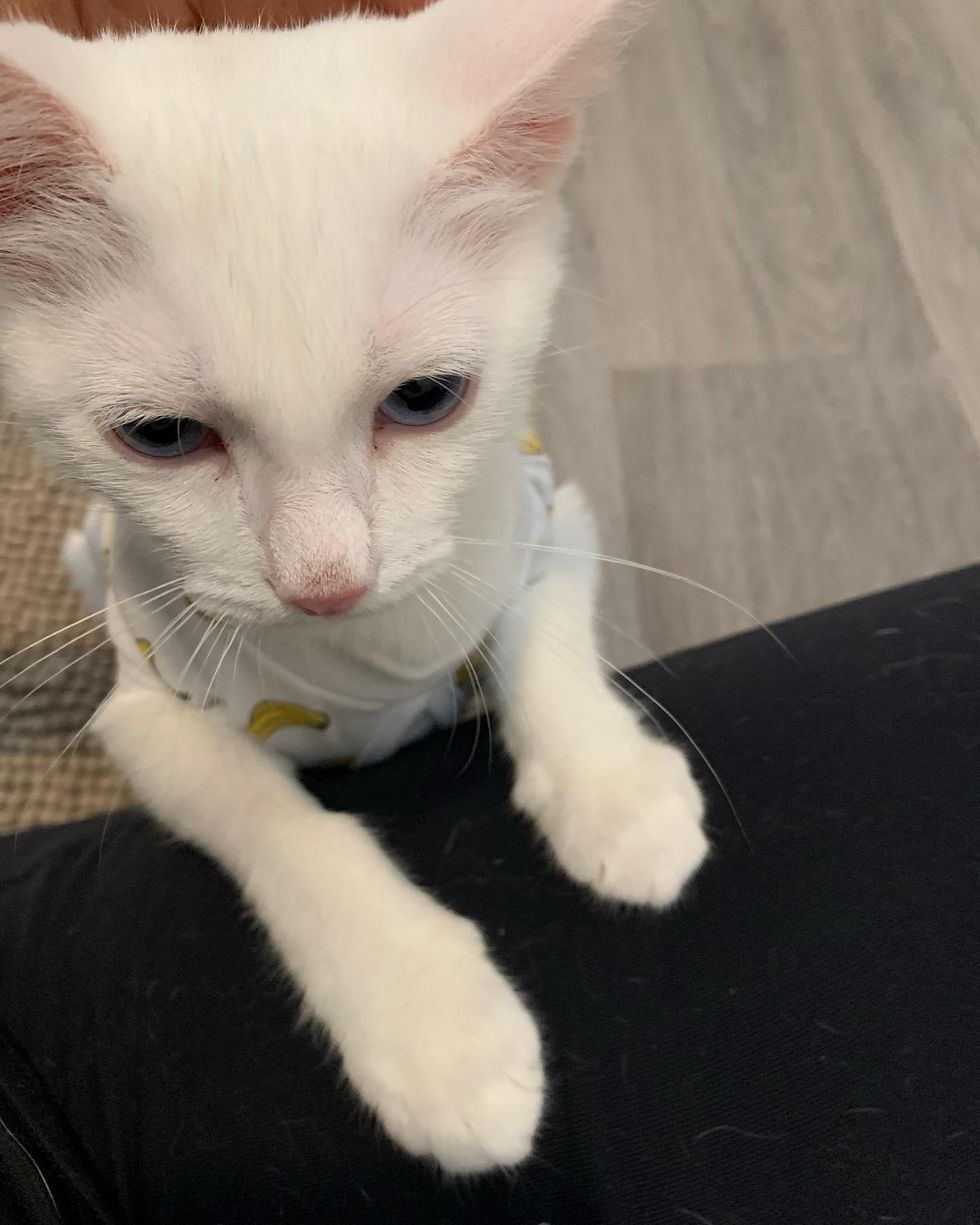 “Sky is just full of purrs and wants to cuddle the minute you sit next to him. He purred throughout bandage changes, and would just love to clean himself.”

After a month of recovery, Sky was officially chest-plate free. He climbed to the top of a cat tree to celebrate. 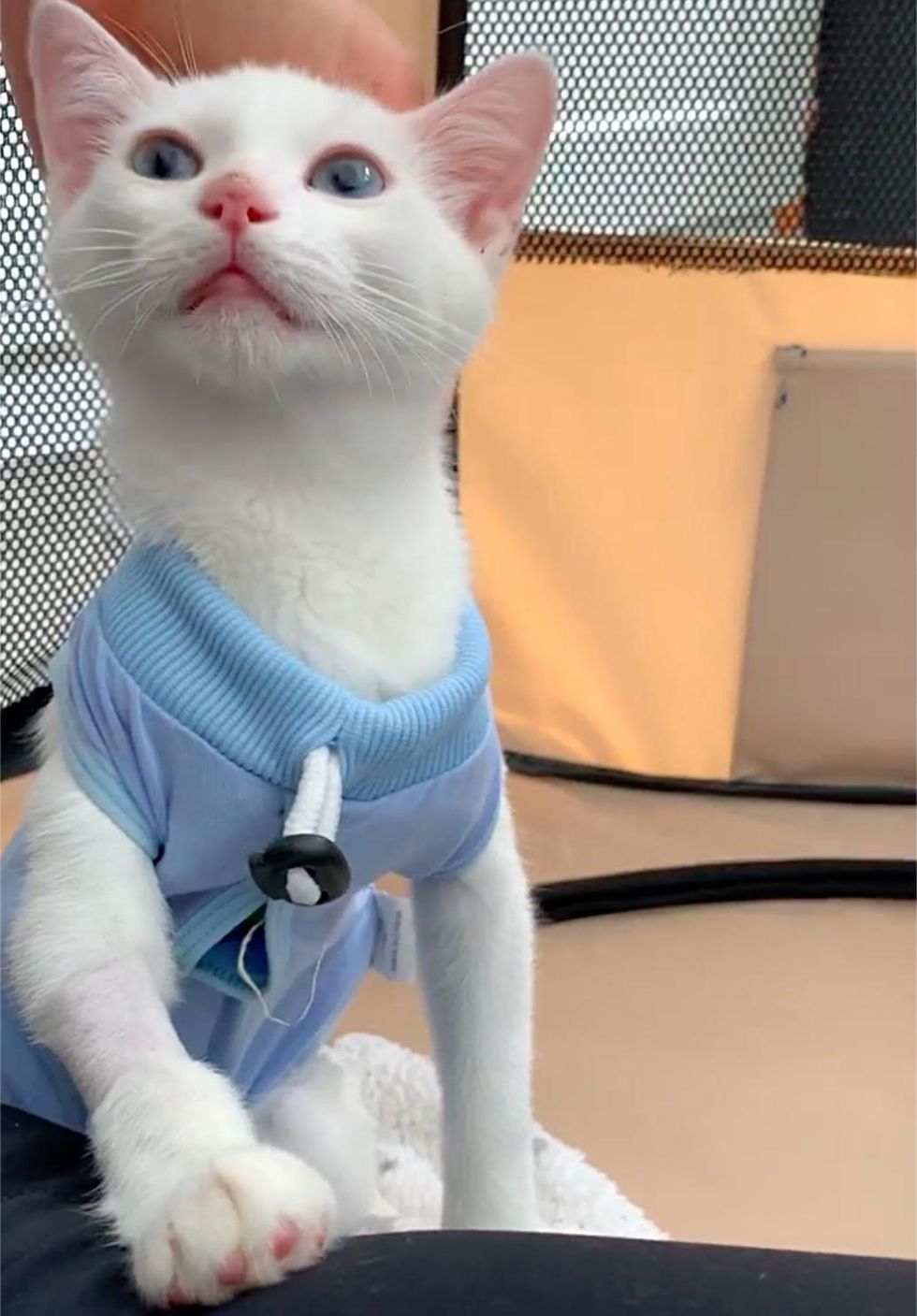 He is constantly looking for attention and petsAlley Cat Rescue

“He is loving all the freedom and getting to groom himself,” Alley Cat Rescue shared.

He has since befriended the resident cat Bubblegum (aka the foster kitten extraordinaire) and other foster kittens, one of whom he’s taken a strong liking to. 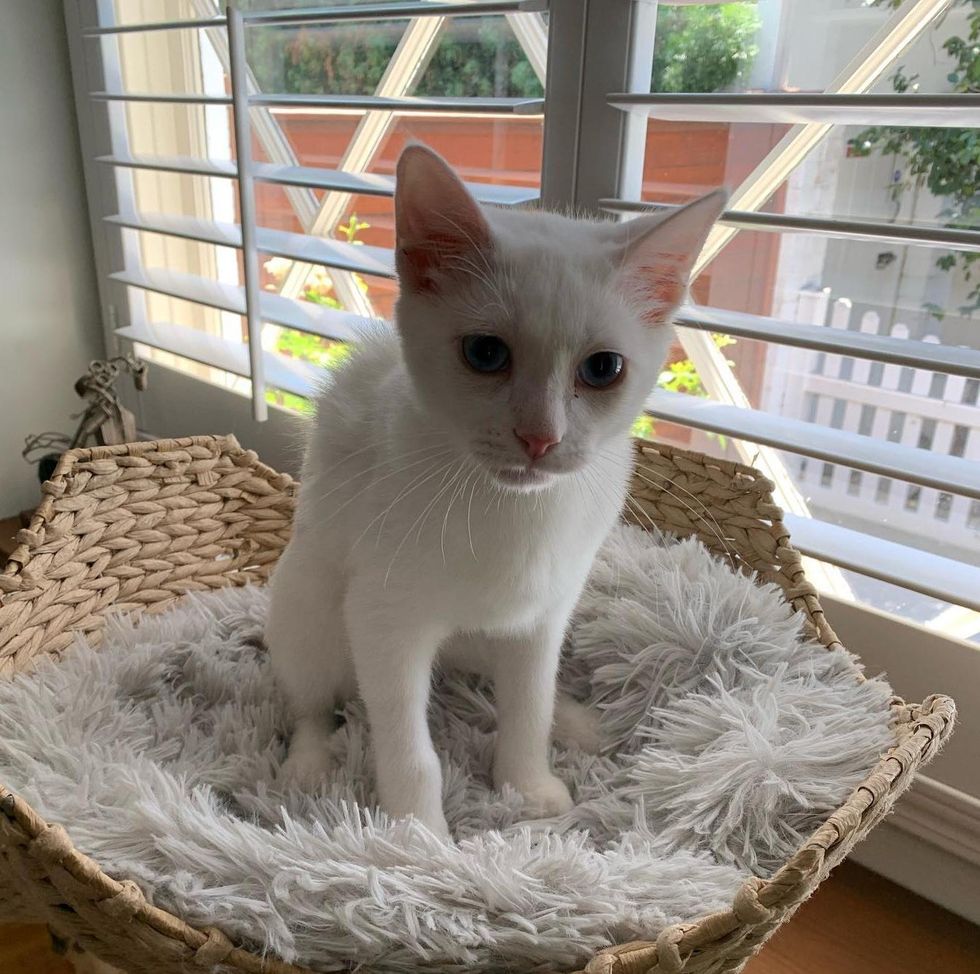 Si, a Siamese mix, came to the rescue desperately needing TLC. He was just skin and bones but took to a bottle right away.

Once he was bigger and ready to socialize, he was introduced to the rest of the feline crew, including Bubblegum who overseas activities inside the foster room. 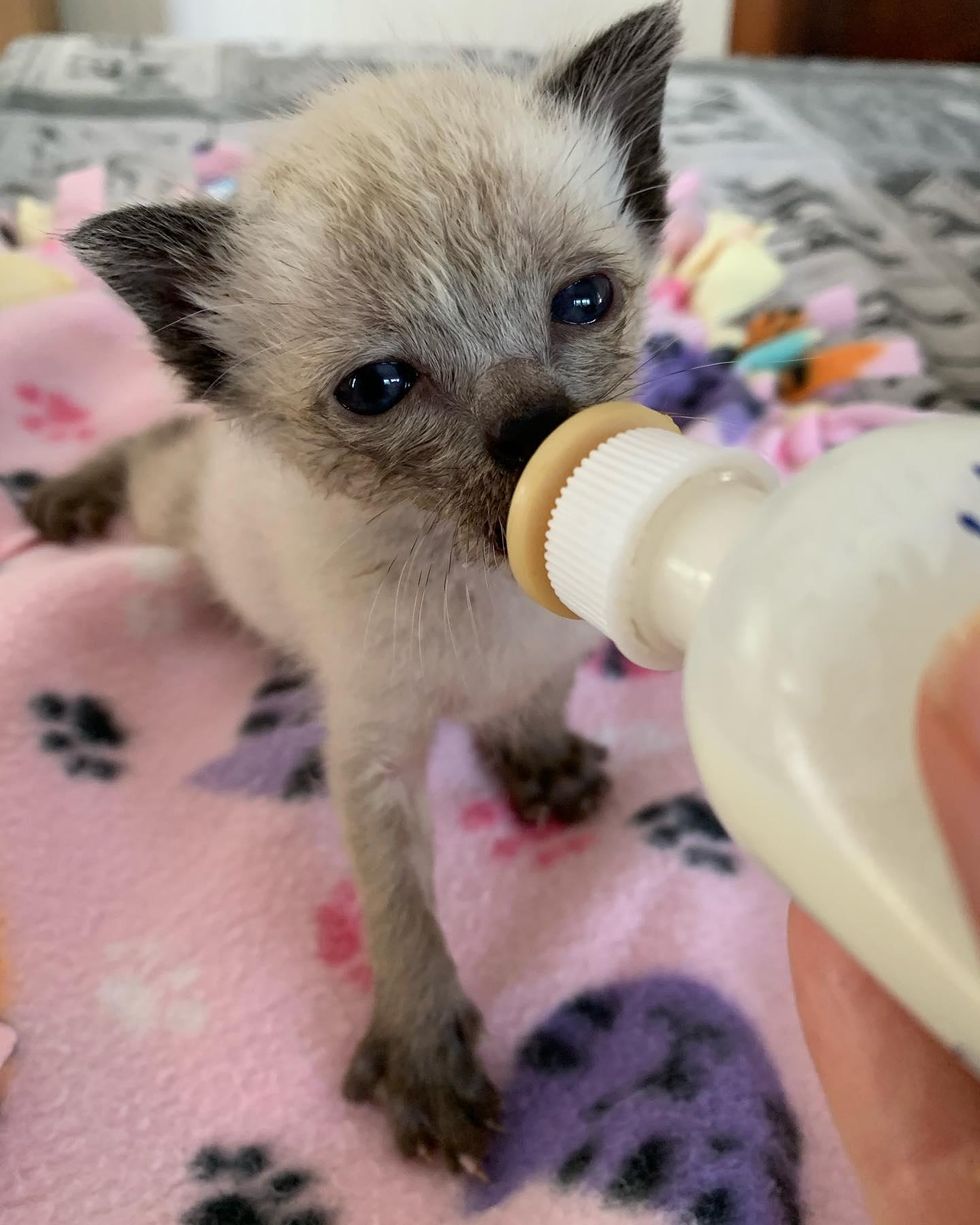 Before they knew it, Sky took over some of the foster duties from Bubblegum and assumed the role of big brother to the littles.

“Sky is all healed up after surgery and is now taking on kitten responsibilities of his own. He is only five months old, and is taking over those six-week-old grooming kittens from Bubblegum.” 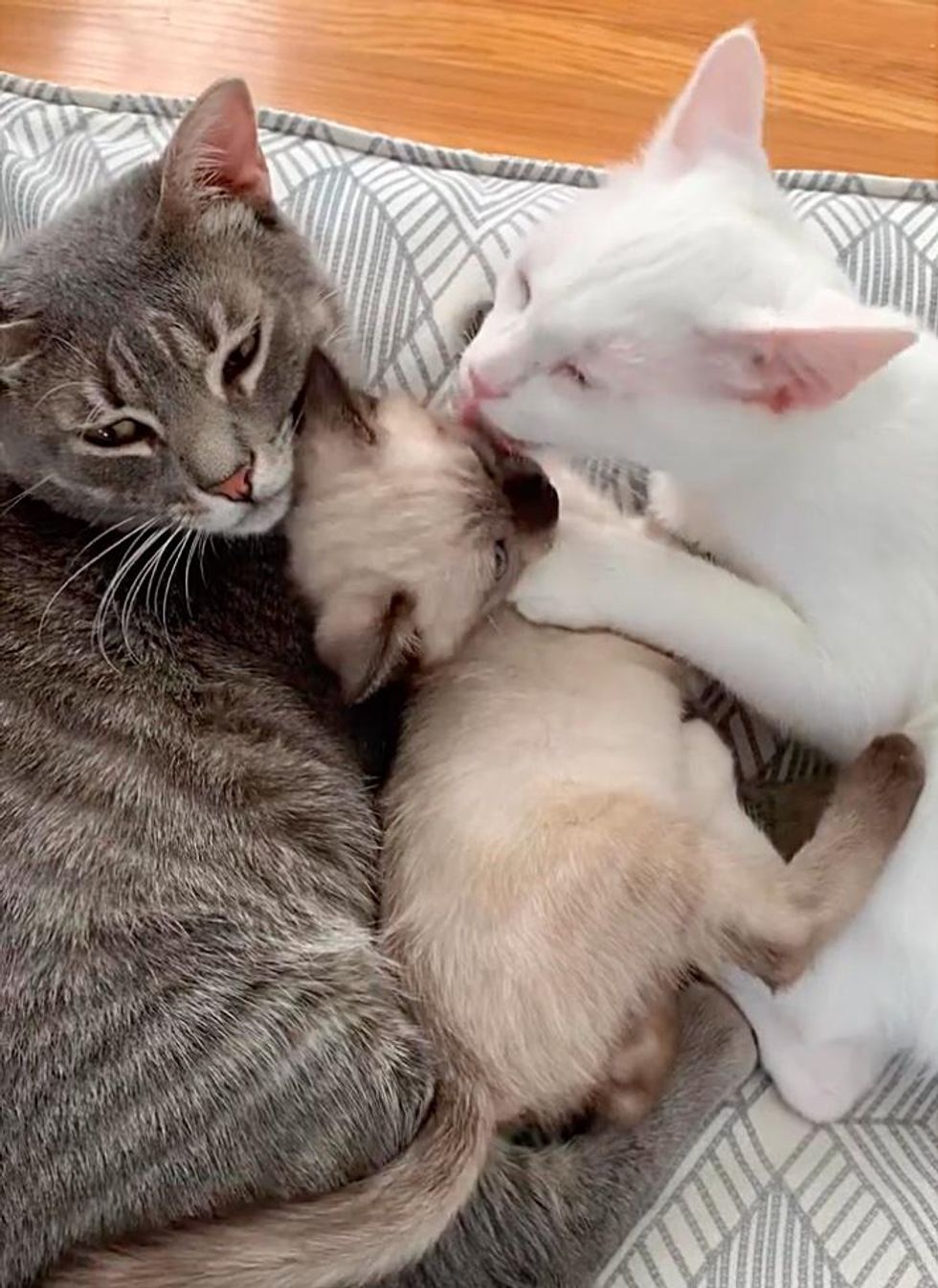 Sky decided to take the kitten under his wingAlley Cat Rescue

He washes their faces and watches over them when they nap. He looks out for the younglings and makes sure that everyone gets a dose of his love.

After surviving the streets, healing from a chin injury, and recovering from chest surgery, Sky is now ready to find his forever home.

He was a sweet boy from the day he was found. He’s overcome every hurdle along the way and never stopped loving life. 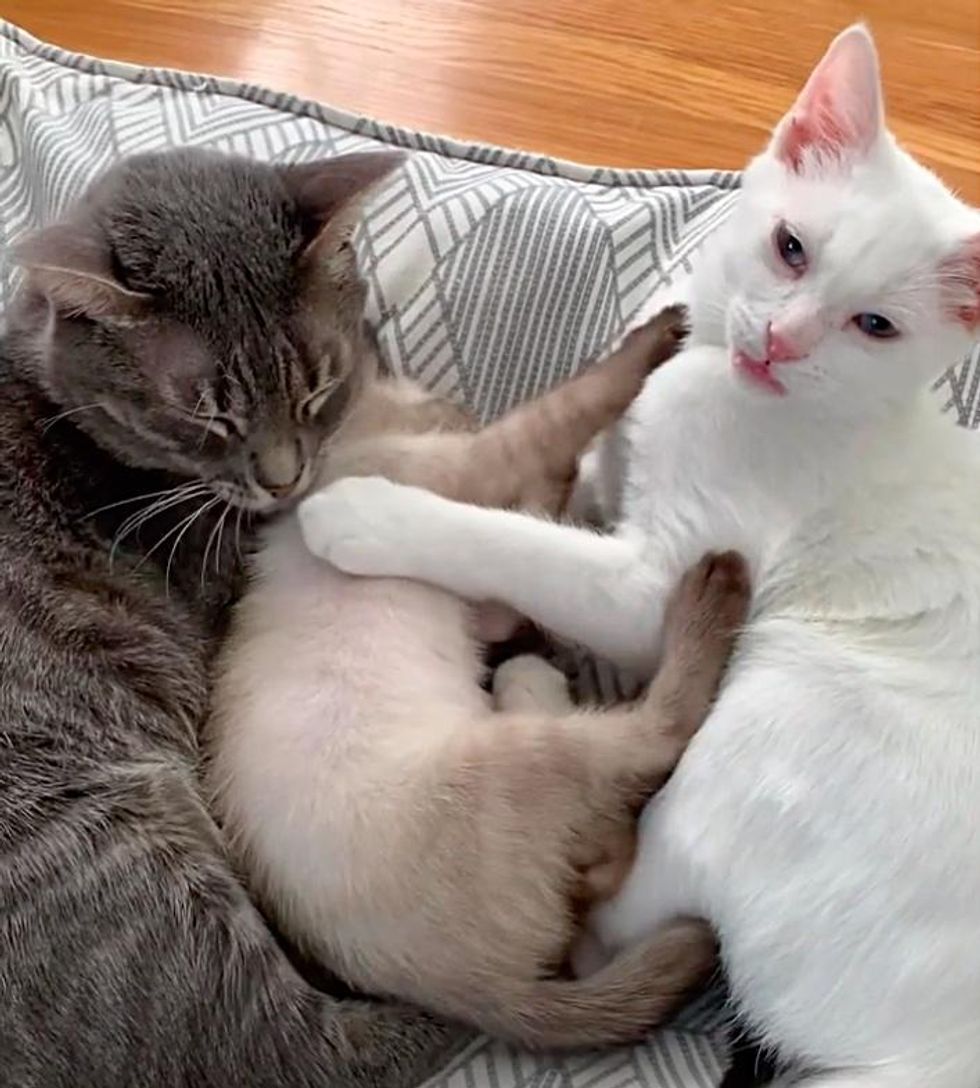 Related story: Cat Lived on the Street her Whole Life, Scooped Up by Kind Hearted Man Who Discovered She is Blind

Can Cats Be Allergic to Humans?

Can Cats Be Allergic to Humans?