A kitten who was born outside as a feral, started to trust and snuggle when she met a resident cat.

Cleo was born outside to a feral cat mom and left to fend for herself. She was the only survivor of her litter and rescued through a TNR (trap-neuter-return) project.

“She was shivering (when found) and the environment wasn’t good for her to be in,” Shelby Thorpe, founder of Shelby’s Kitten Safe House, shared with Love Meow.

The feral mom never returned so they made the decision to take the kitten in and start bottle-feeding her around the clock. 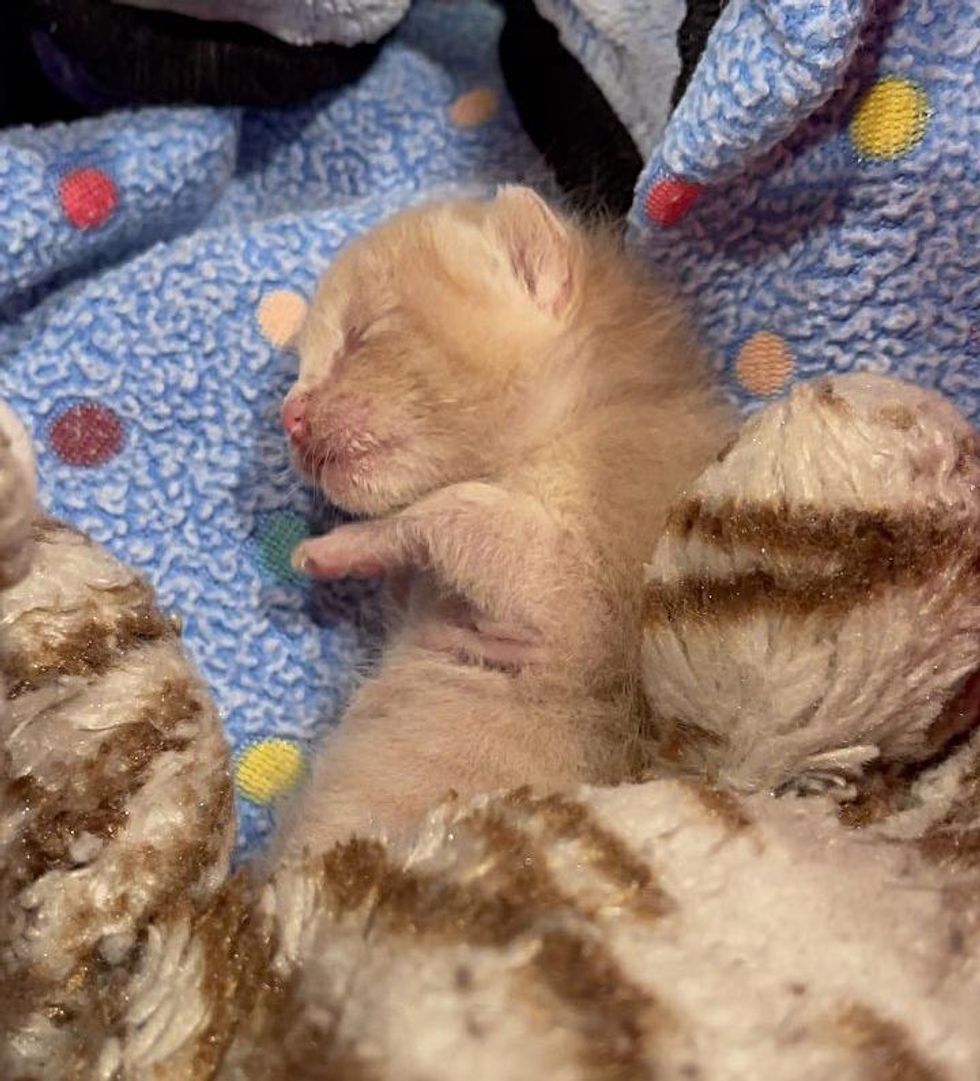 “She was fairly active when I got her but had fleas and the beginning of what looked like eye infections.” Shelby started treating the kitten and made sure that she was well fed and had a comfy, warm bed to sleep in.

After a few days of intensive care, Cleo was strong enough to eat from the bottle without struggles, and Shelby could finally breathe a sigh of relief. 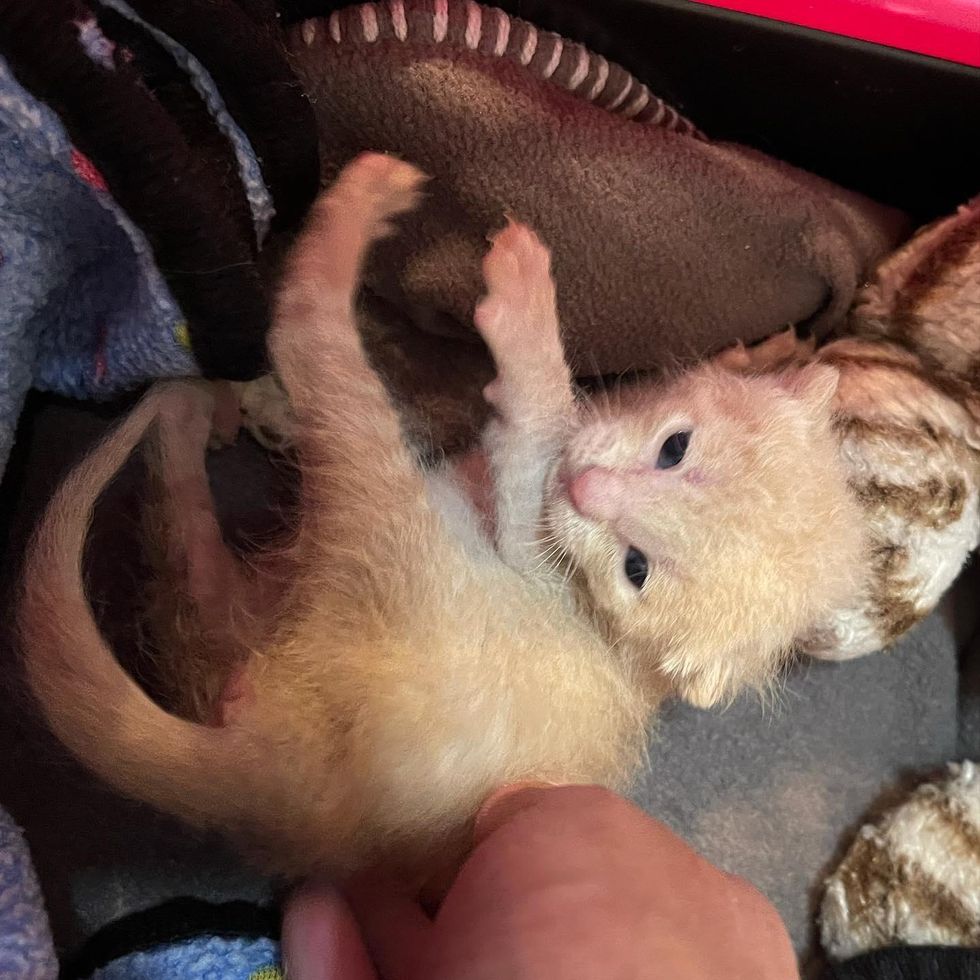 With her newfound strength, Cleo started to explore her surroundings and was eager to have a constant friend. “When I wasn’t around, Cleo only had her four little legs to watch as they flailed.”

Shelby’s resident cat Polar had caught wind of the newcomer and patiently waited to meet her. 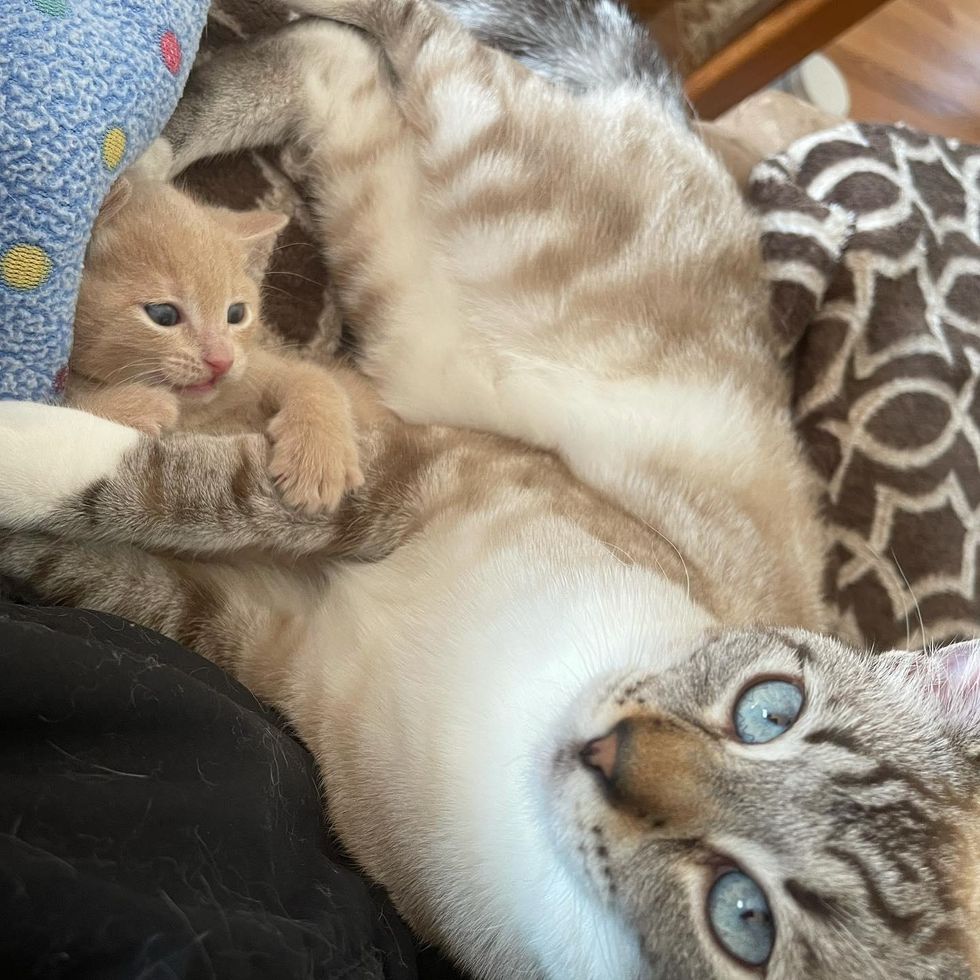 Just like Cleo, Polar was once a rescue baby and found his forever home with Shelby. He began helping other kittens in need and showed them the same love that he received.

Once the kitten was medically clear, Polar came running to her and took her right under his wing. 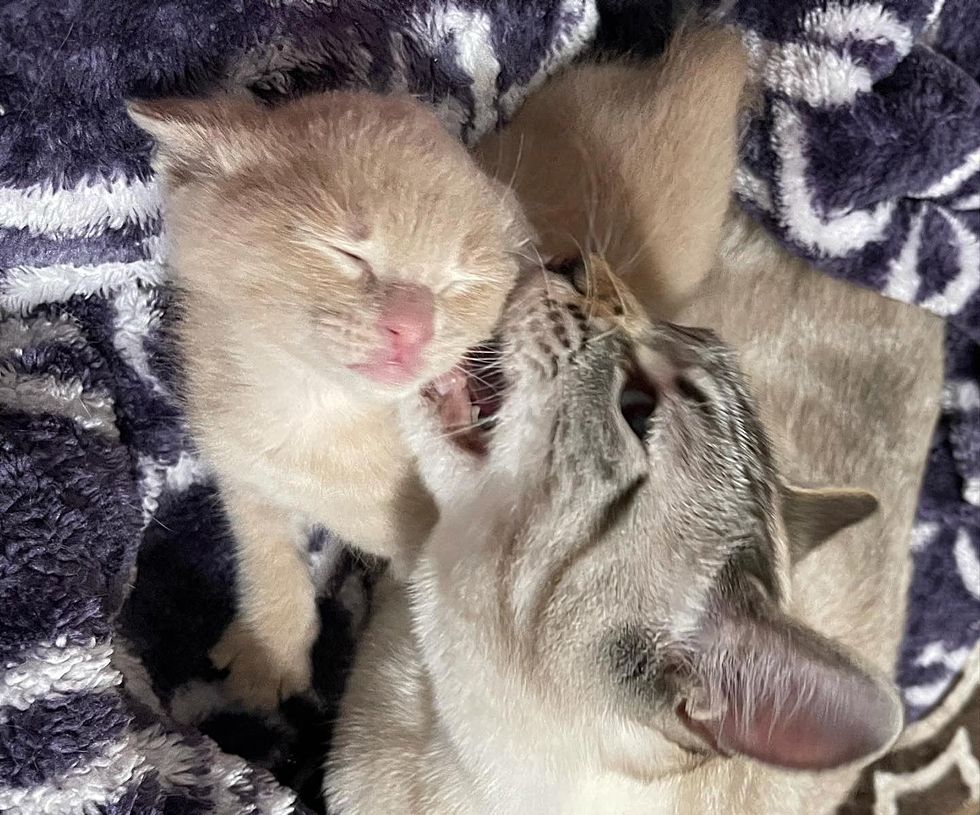 She was so happy to be doted on by PolarShelby @fosterkittenlove

Over the next few weeks, Cleo learned to play with lots of encouragement from Polar. He would gently pounce on her to get her to chase or wrestle with him. 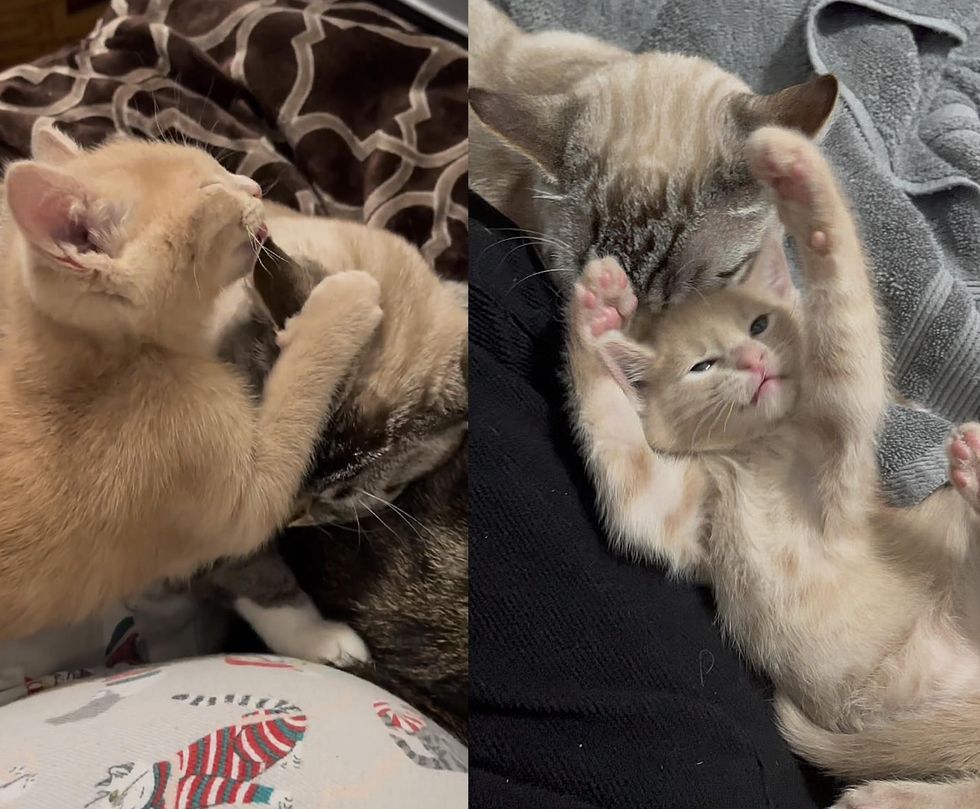 Cleo was subsequently introduced to other foster kittens, but she always came back to snuggle with Polar after she was done playing. “She was raised by Polar, and she’s his little shadow.”

The two buddies play hard and snuggle even harder. 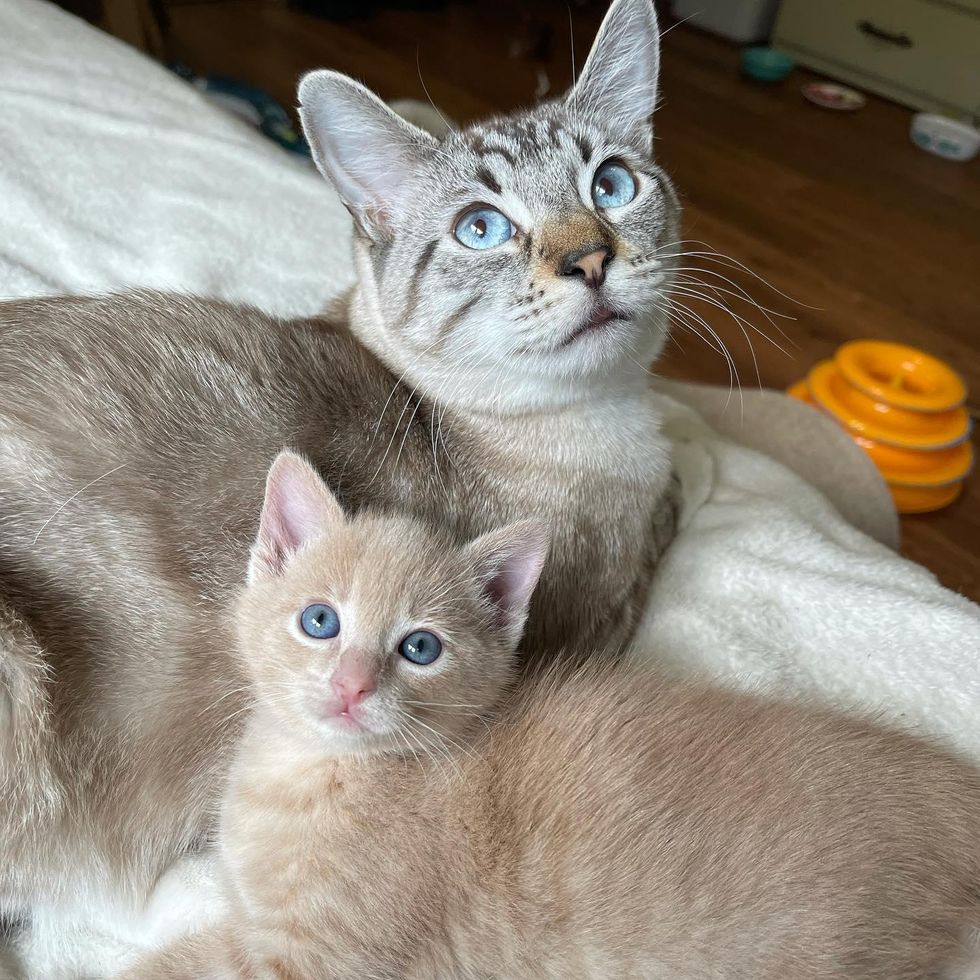 Cleo has grown in size and confidence and blossomed into a big personality with so much to give.

“She chatters when she sees birds but only lets me get small video clips before she gets distracted and wants to be petted,” Shelby shared. 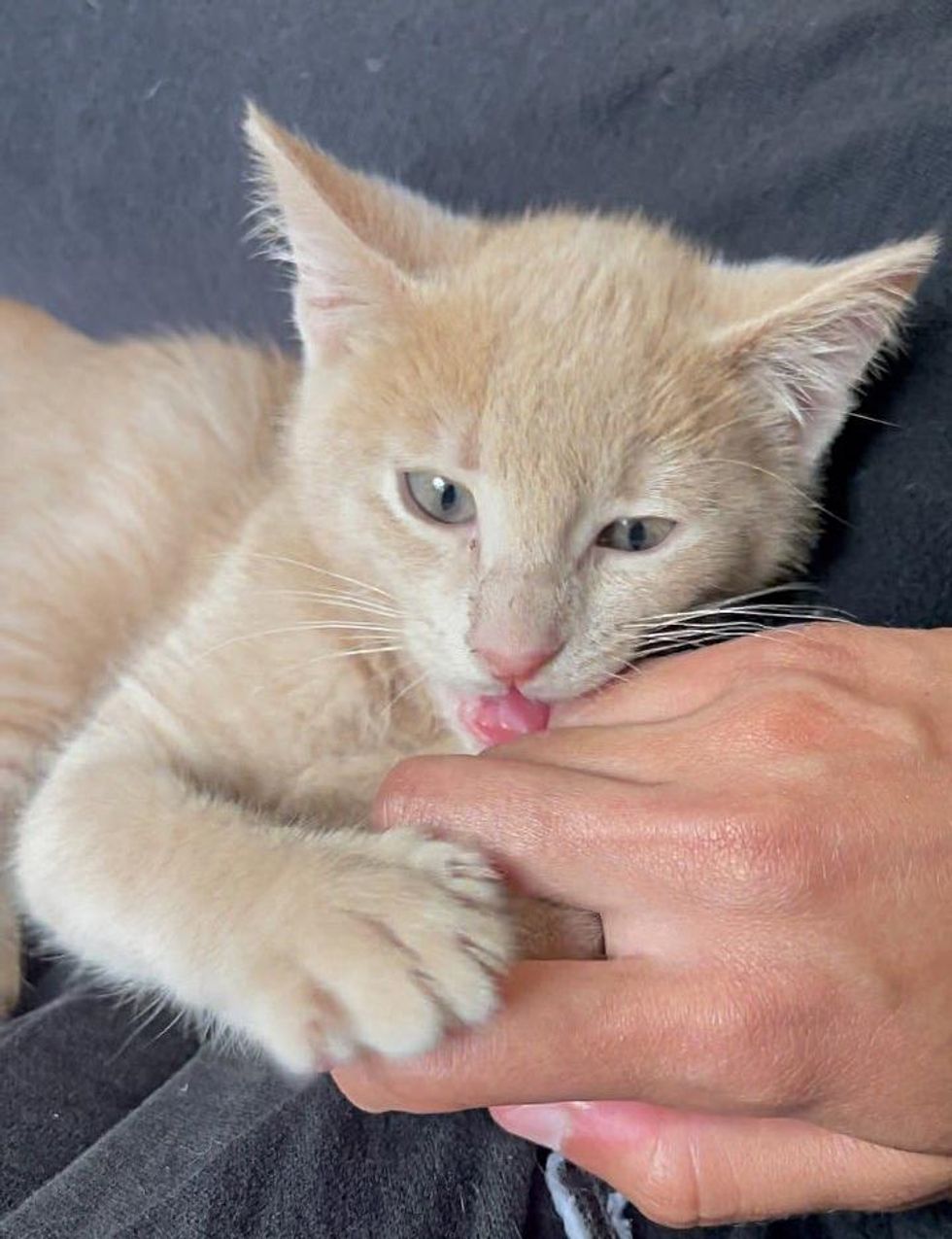 “If you close a door and she knows you’re on the other side, she will politely (and loudly) let you know you accidentally forgot her. She loves snuggling after she’s tired herself out and will climb into your arms to be as close to you as possible.” 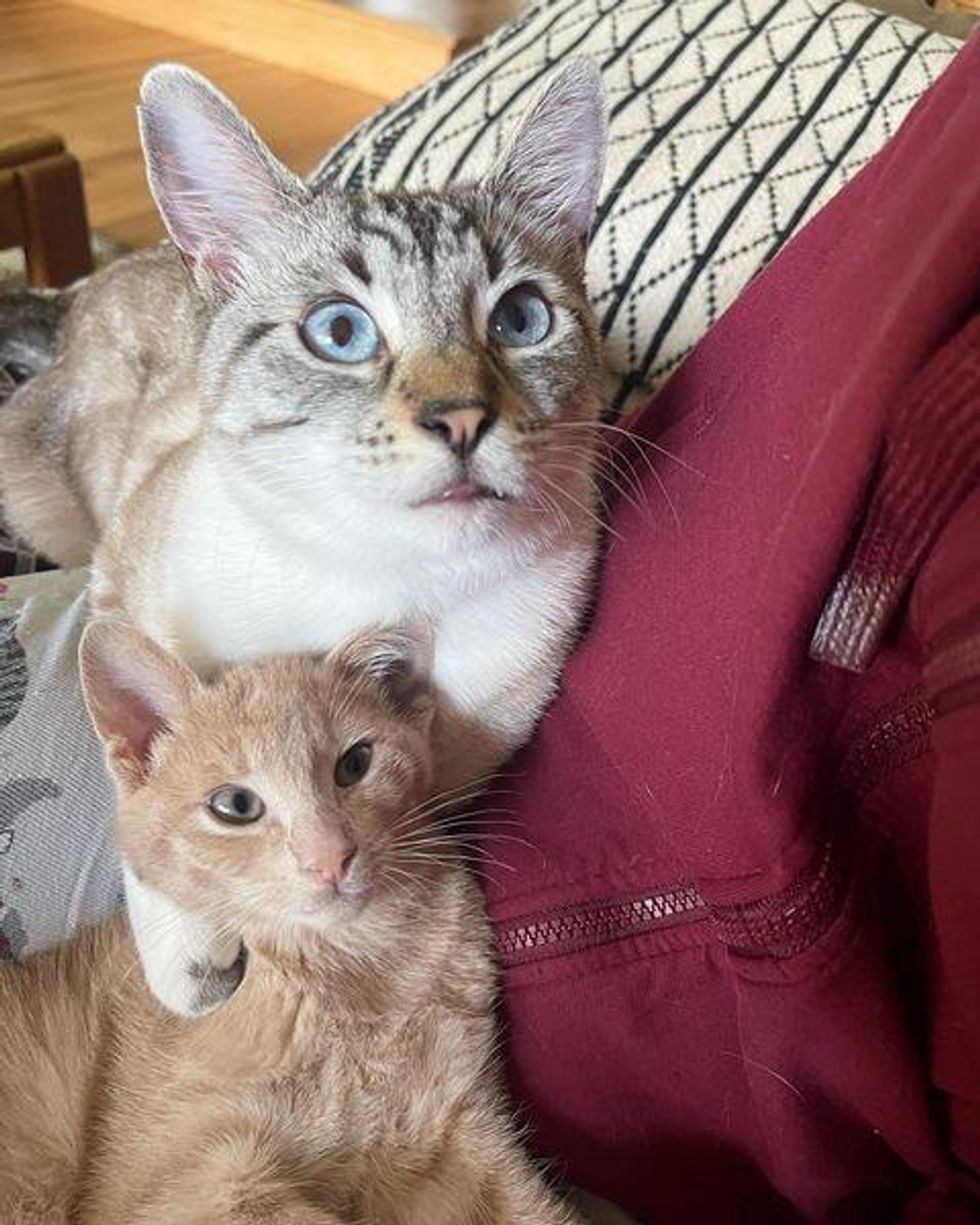 Cleo was given a new lease on life when she was found outside and left to fend for herself. Now, she has a loving foster family to cater to her whims and a doting cat buddy to show her the ropes. 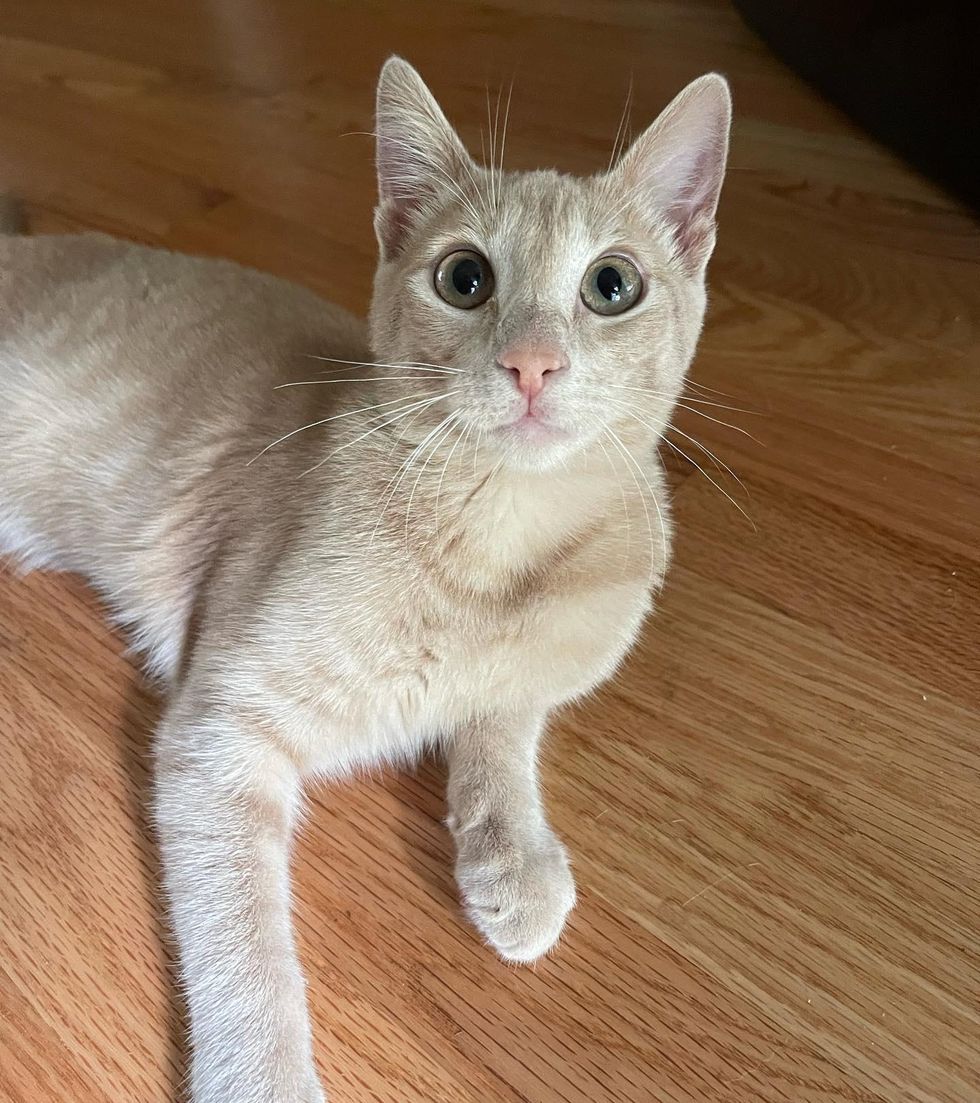 Related story: Feral Kitten Turns into an Attention Seeker After She’s Given a Taste of Indoor Life