Kitten Walks with His Back Legs Splayed Out, is Determined to Be Able to Jump One Day

A kitten who walks with his back legs splayed out, is determined to be able to jump one day.

An orange tabby kitten was brought into an animal shelter in NC for a chance at a better life. While he was in foster care, they noticed that something was different about his hind legs when he walked.

“He wasn’t able to get around easily. The foster coordinator at the shelter contacted us, because she knows we work with special needs cases,” Sarah Kelly, founder of Murphy’s Law Animal Rescue, told Love Meow.

The kitten named Leo has a congenital condition called Swimmer’s Syndrome, which causes his back legs to splay to the sides, making it harder to walk and jump. 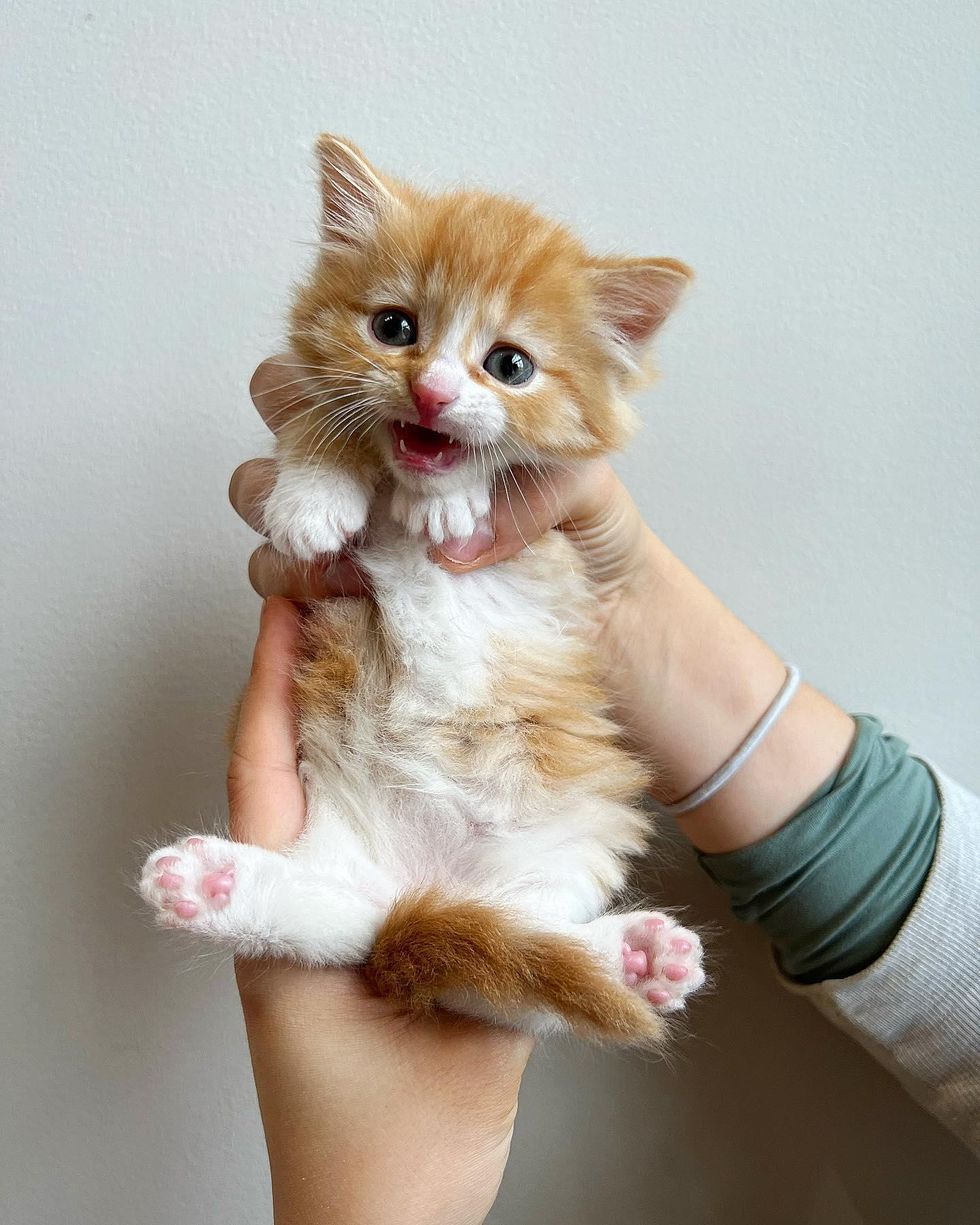 Leo was born with a condition called Swimmer’s SyndromeSarah @kellyfosterkittens

Despite it all, Leo proved to be a fiery, brave little guy from the get-go. He would push himself upward and forward, so he could keep up with other kitties.

“He is a mighty spirit and even bigger personality, like a lion, hence his name.” 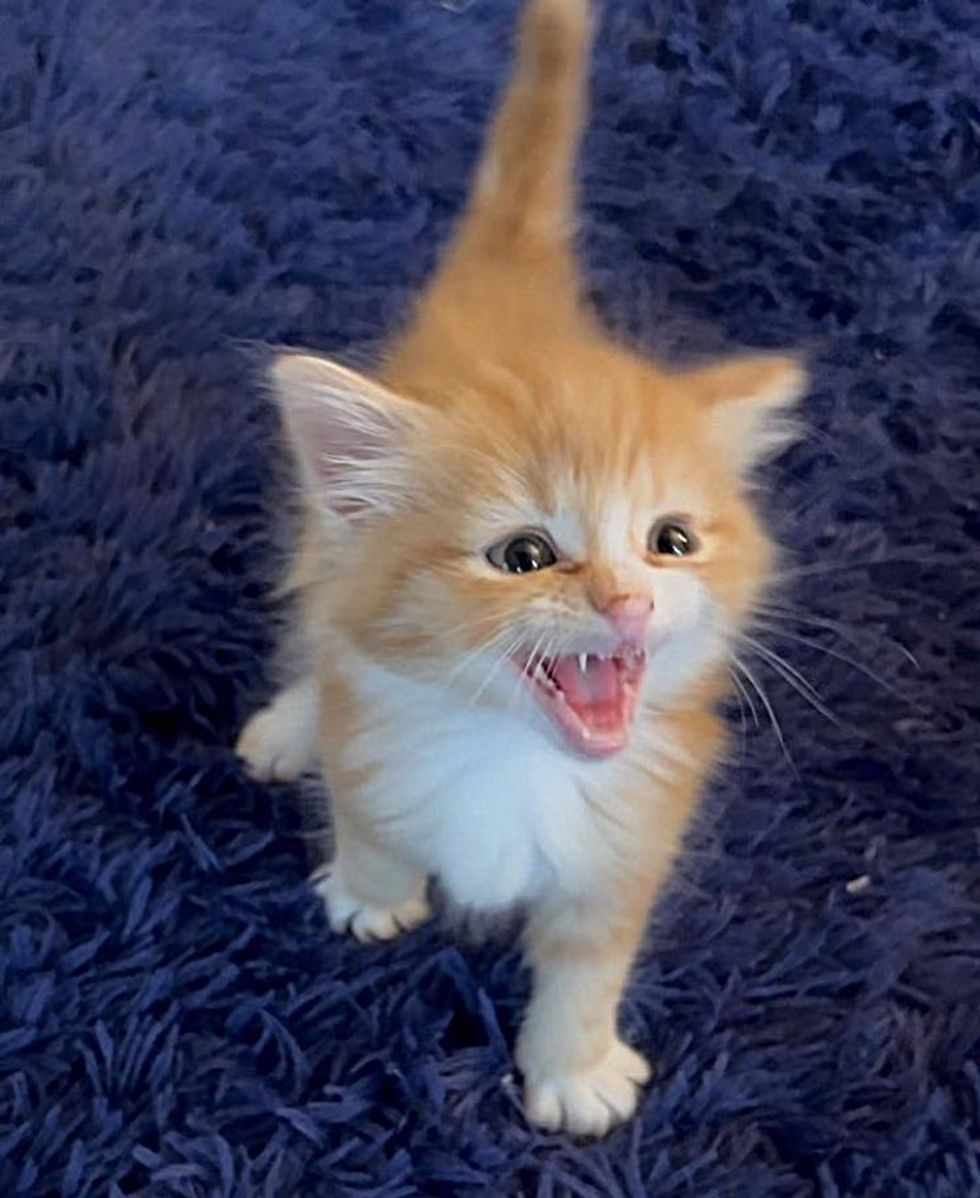 Leo settled right into his new space and claimed all the beds and toys as his own. He was fearless, vivacious, eager for attention, and had plenty to say.

With experience helping kittens like Leo, Sarah began providing physical therapy and supportive care to correct his hind limbs and improve his mobility. 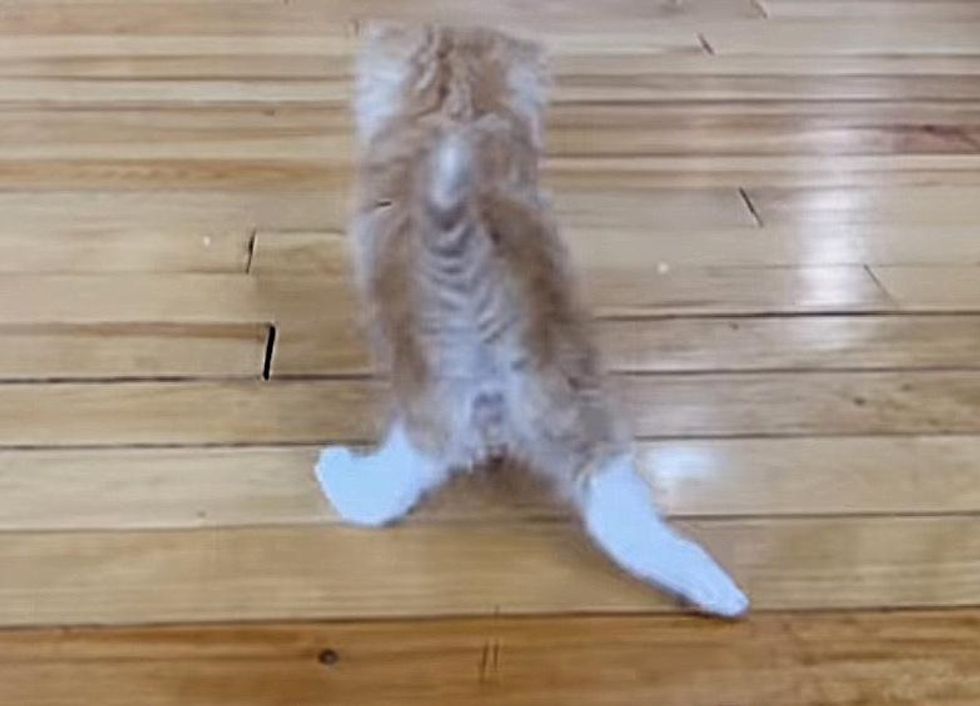 His hind legs splay to the sides when he walksSarah @kellyfosterkittens

Leo took it all in stride as if he knew it was helping him stand and walk easier. “Right away, we started with taping his legs and physical therapy exercises,” Sarah shared with Love Meow.

The tabby boy starts his daily routine by meowing up a storm as Sarah comes into the room. 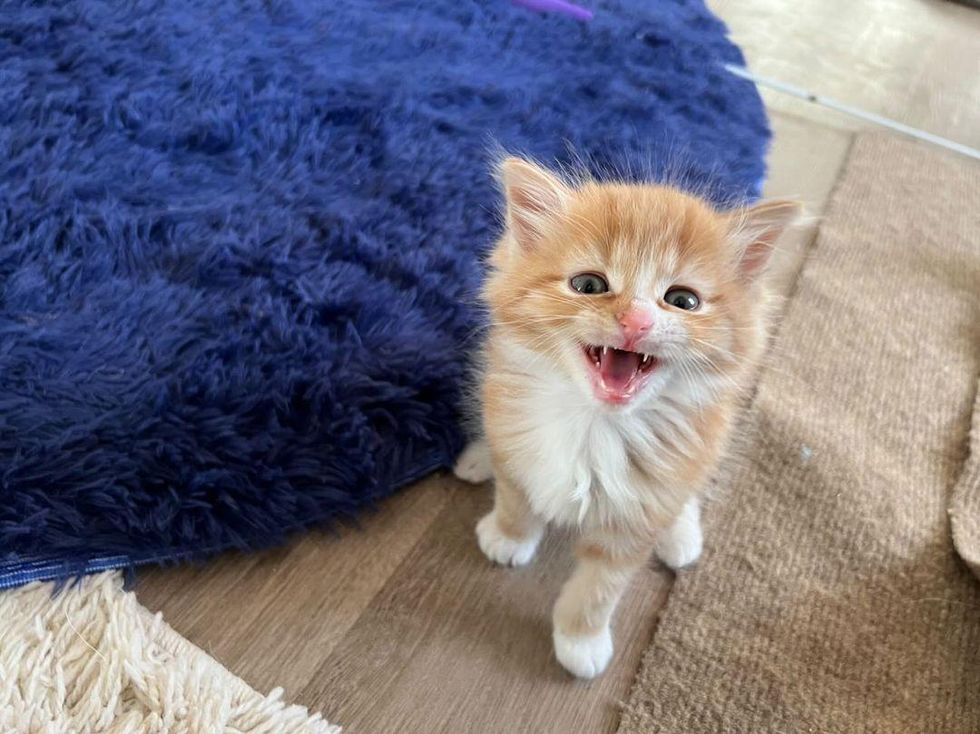 Watch Leo the kitten in this cute video:

He makes his way to his foster mom and looks into her eyes as if he’s ready for physical therapy. With regular stretching and walking exercises, Leo has made great progress. 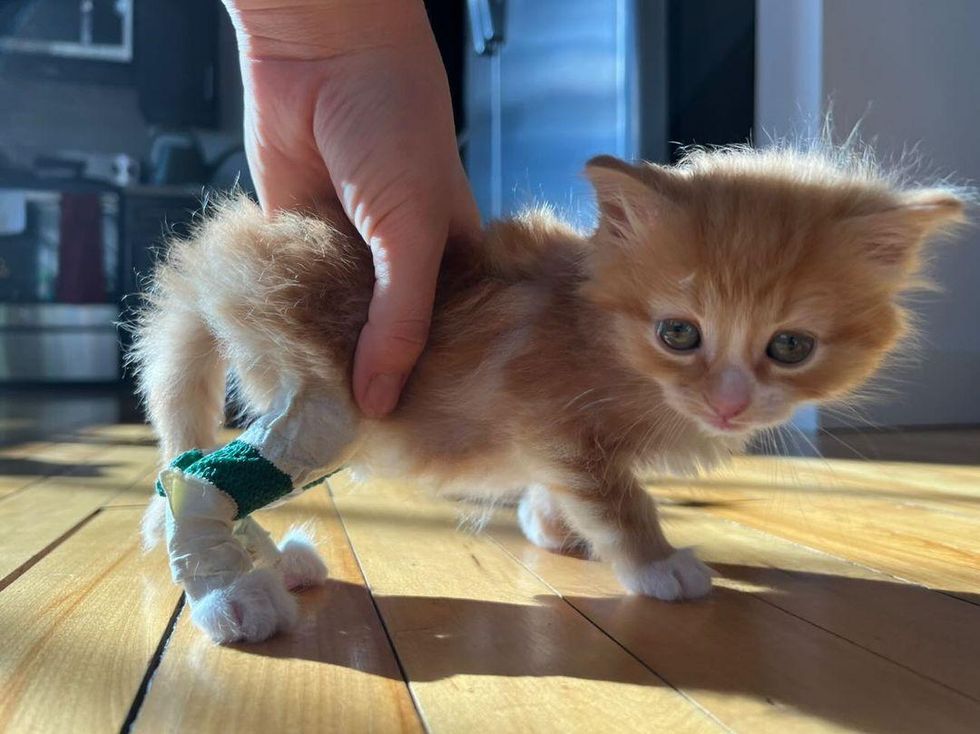 Leo gets physical therapy and leg exercises every daySarah @kellyfosterkittens

The tabby boy is always up for adventures and craves attention from his people. He will purr and meow simultaneously nonstop until he gets exactly what he wants.

Leo is doing a wonderful job strengthening his legs and working them in the right position. 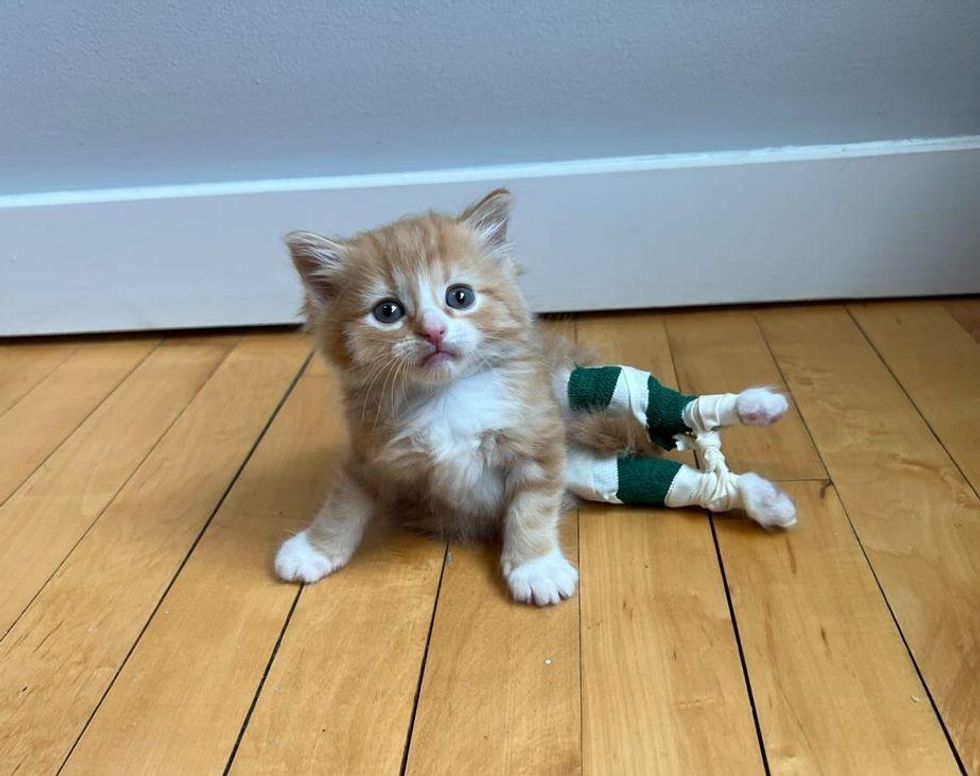 “He is a love-bug. He wants to be snuggling and playing on our legs or in our lap at all times. He loves snuggling with his foster siblings, too.”

Leo is able to move around much easier now and even starting to get a little hopping action going when he plays. 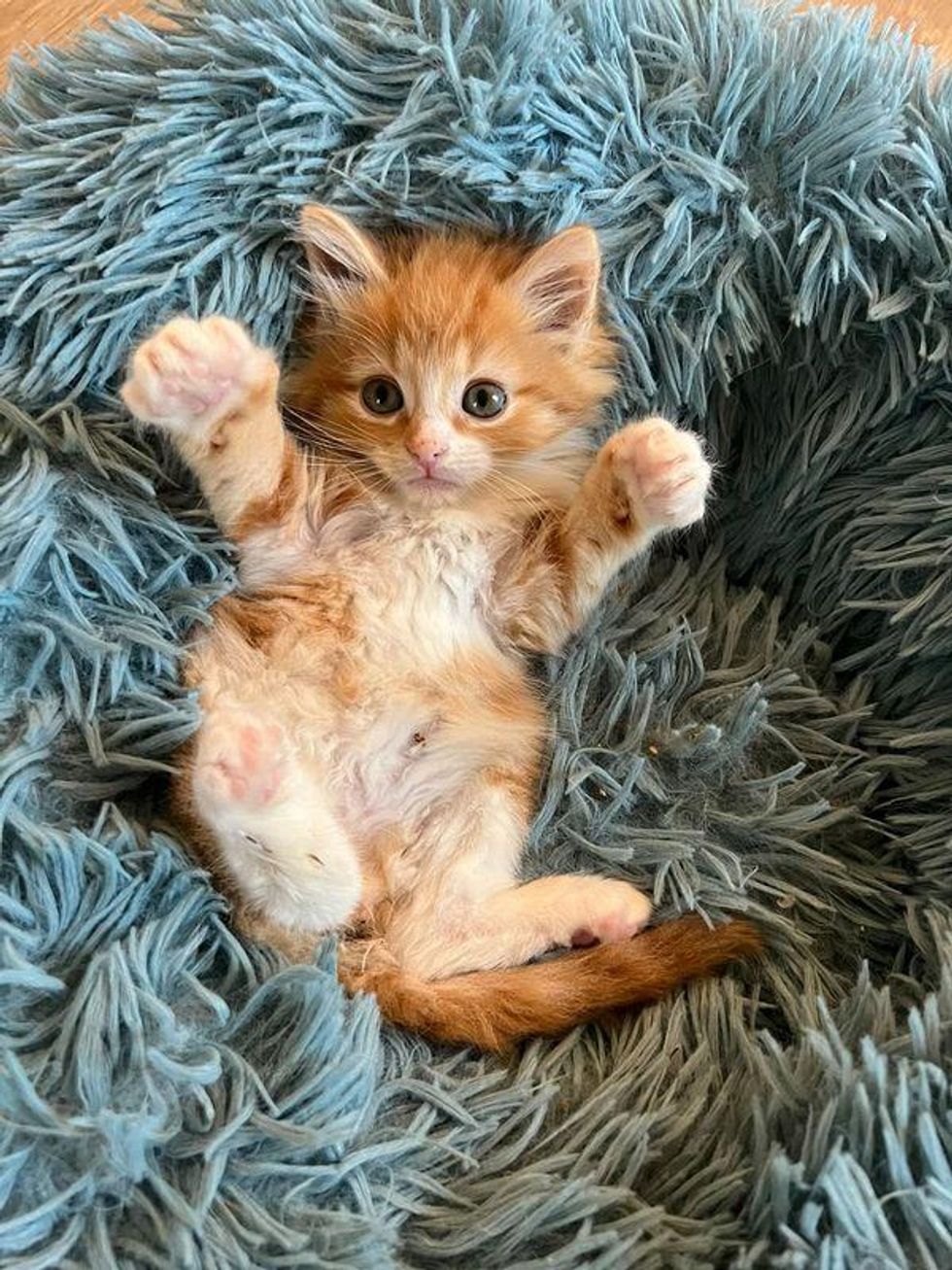 After two weeks of hard work, Leo has gotten much stronger. He is determined to be able to run and jump like any other kitten one day soon.

Leo is living up to his name like a fierce little lion cub. 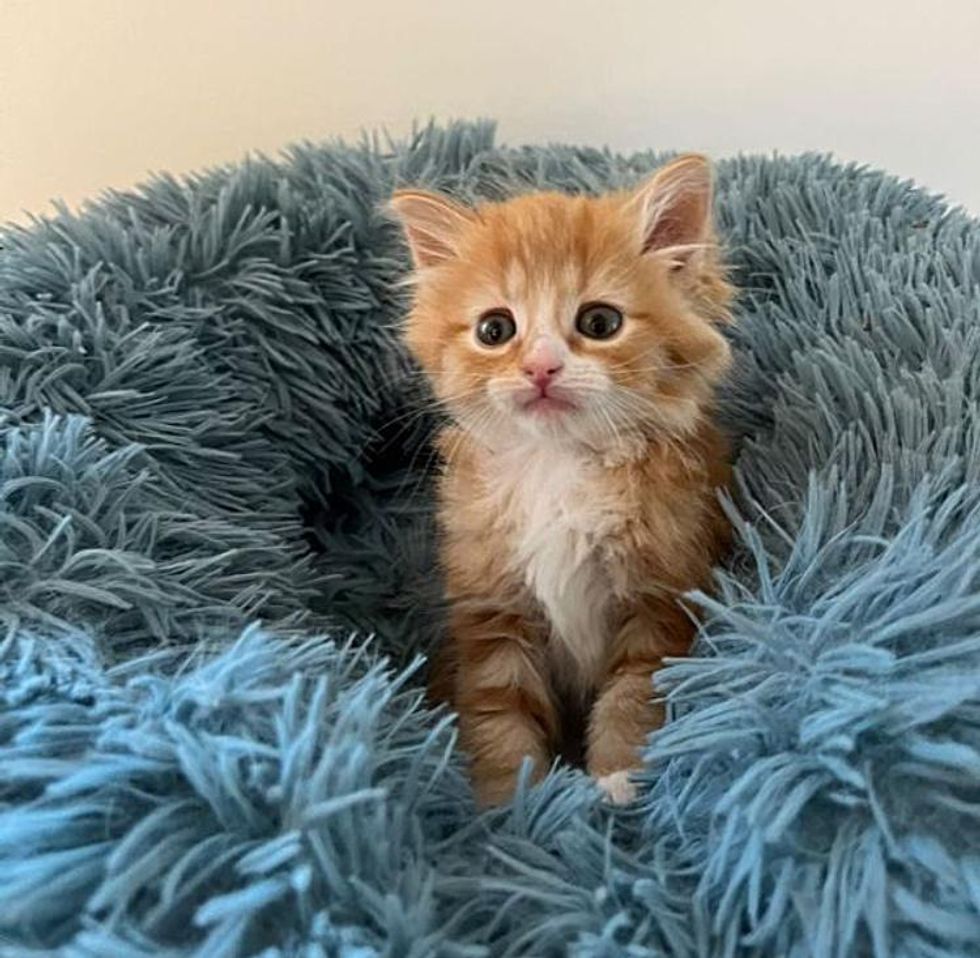 What he lacks in size, he surely makes up for in personality, determination and cattitude. 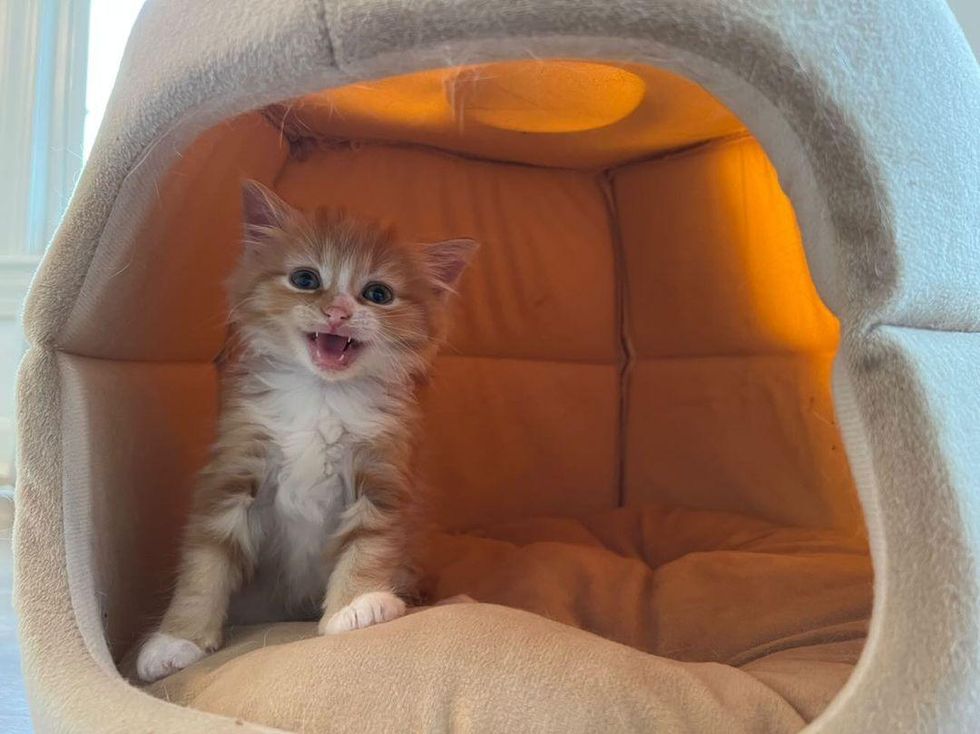 Leo has a big personality and lots of cattitudeSarah @kellyfosterkittens

Related story: Cat is Over the Moon to Have Kittens in a Warm Abode and Purrs Her Way Through Every Day