A stray kitten stayed on a backyard patio and decided to wait for someone to come pick him up.

A San Francisco resident made a makeshift home with a large box and blankets for the local strays. When the holidays came around, a stray cat showed up with her kittens to the backyard patio and decided to huddle up in the makeshift nest.

When the resident went to check on the family, she noticed that only one kitten remained behind. He stayed in the nest as if he was waiting for someone to come scoop him up.

The kind lady reached out to her local animal rescue, Saving Grace Rescue, and asked if they could help him. 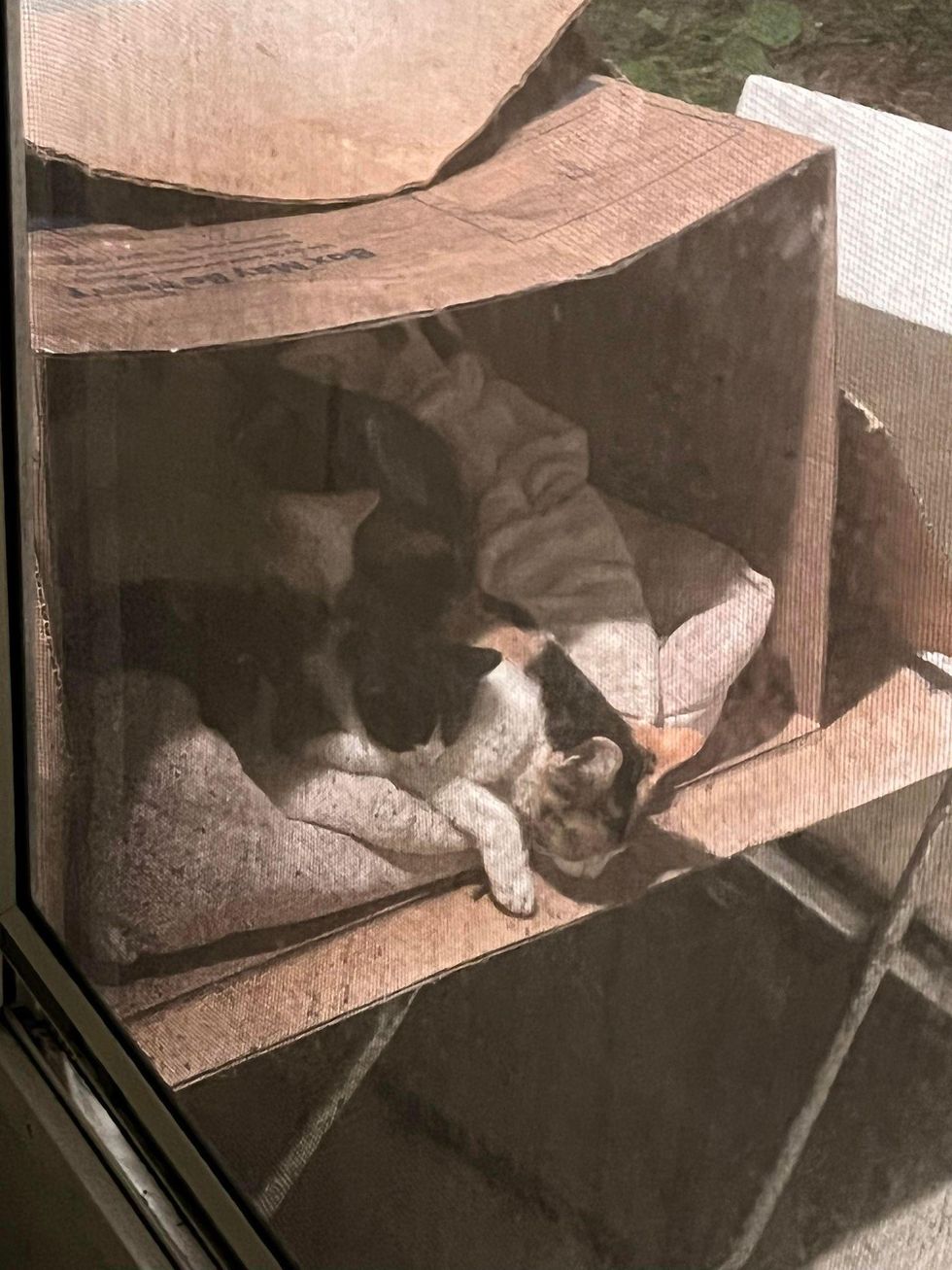 “She waited for the rest of the cat family to come back but they never did. So she contacted us,” Joyce, a foster volunteer of the rescue, told Love Meow.

“His mom and siblings left the yard, but he didn’t go.” 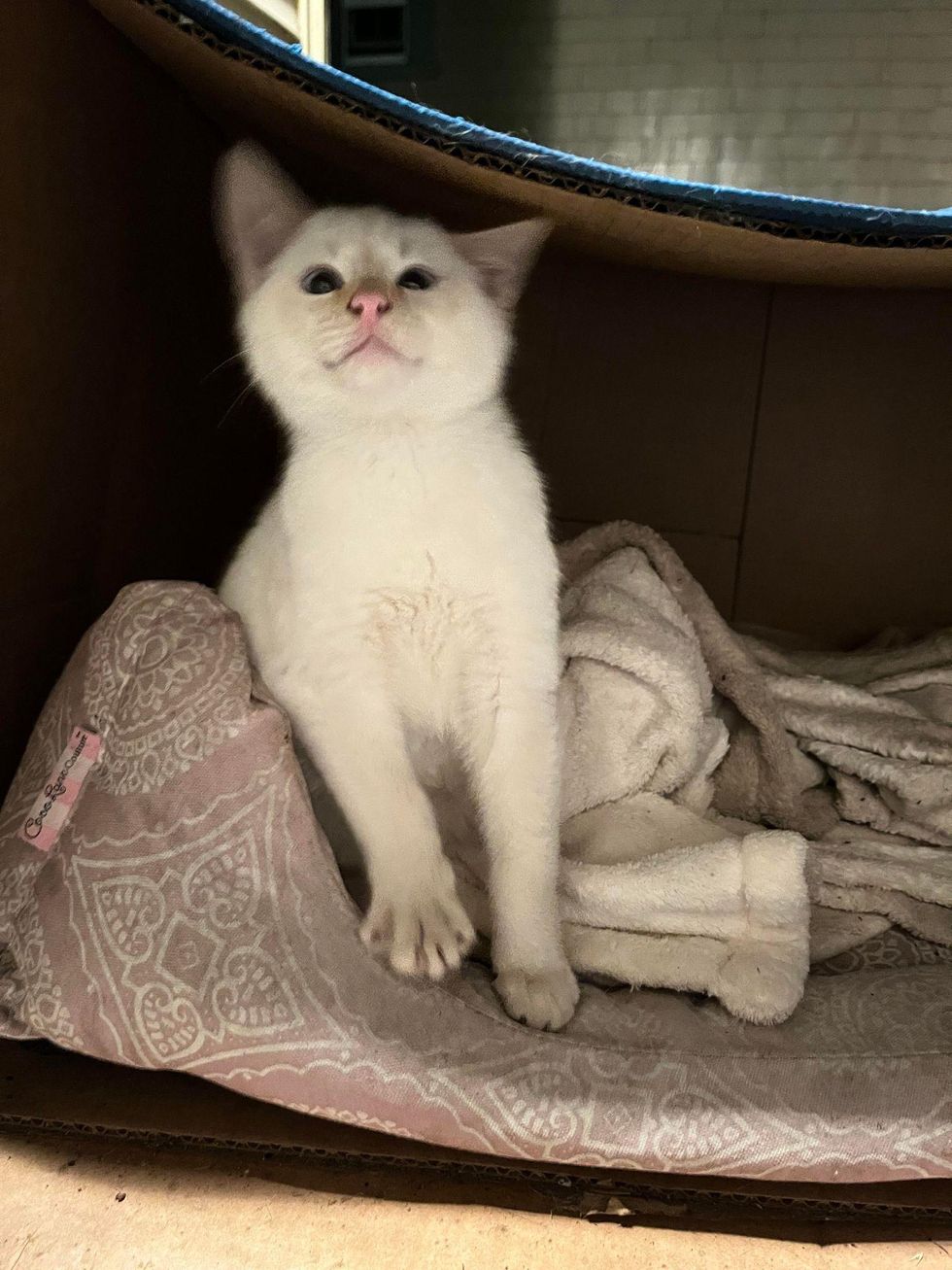 Joyce welcomed the new kitten into her home and lovingly named him Peppermint. He was all cleaned up and filled his belly to the brim.

For the first few days, the kitten hid away in places that they never knew existed. At one point, Joyce worried that he had somehow snuck out of the house after they had looked everywhere and couldn’t find him. 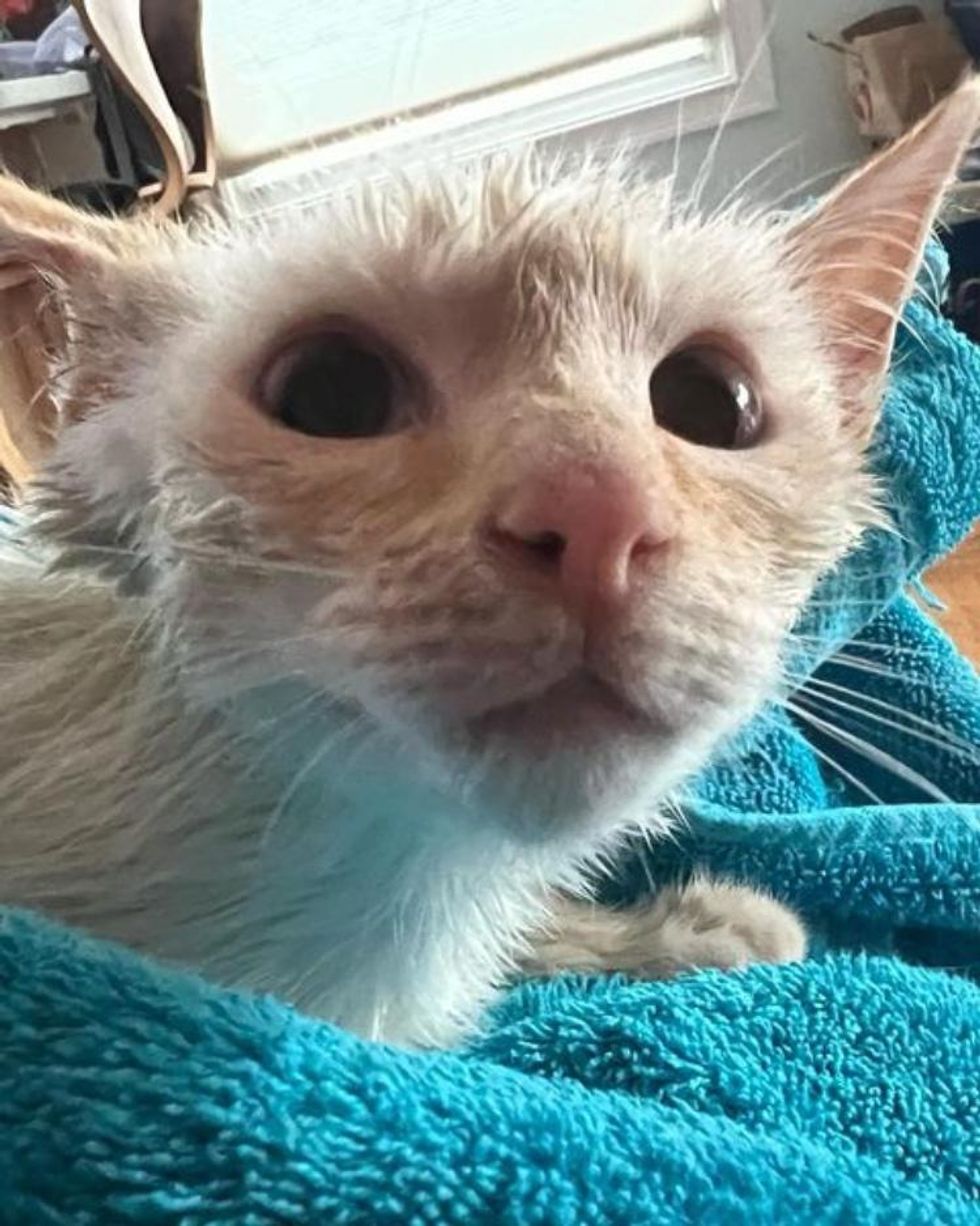 Peppermint was all cleaned up in his foster homeJoyce @kangaroothekitty

As it turned out, Peppermint discovered more secret hideouts to cloak his presence. Joyce has fostered many cats and kittens, and Peppermint is by far the most skilled hider.

Once he mustered up the courage to emerge, Joyce placed a pet tracker on him to ensure his safety. 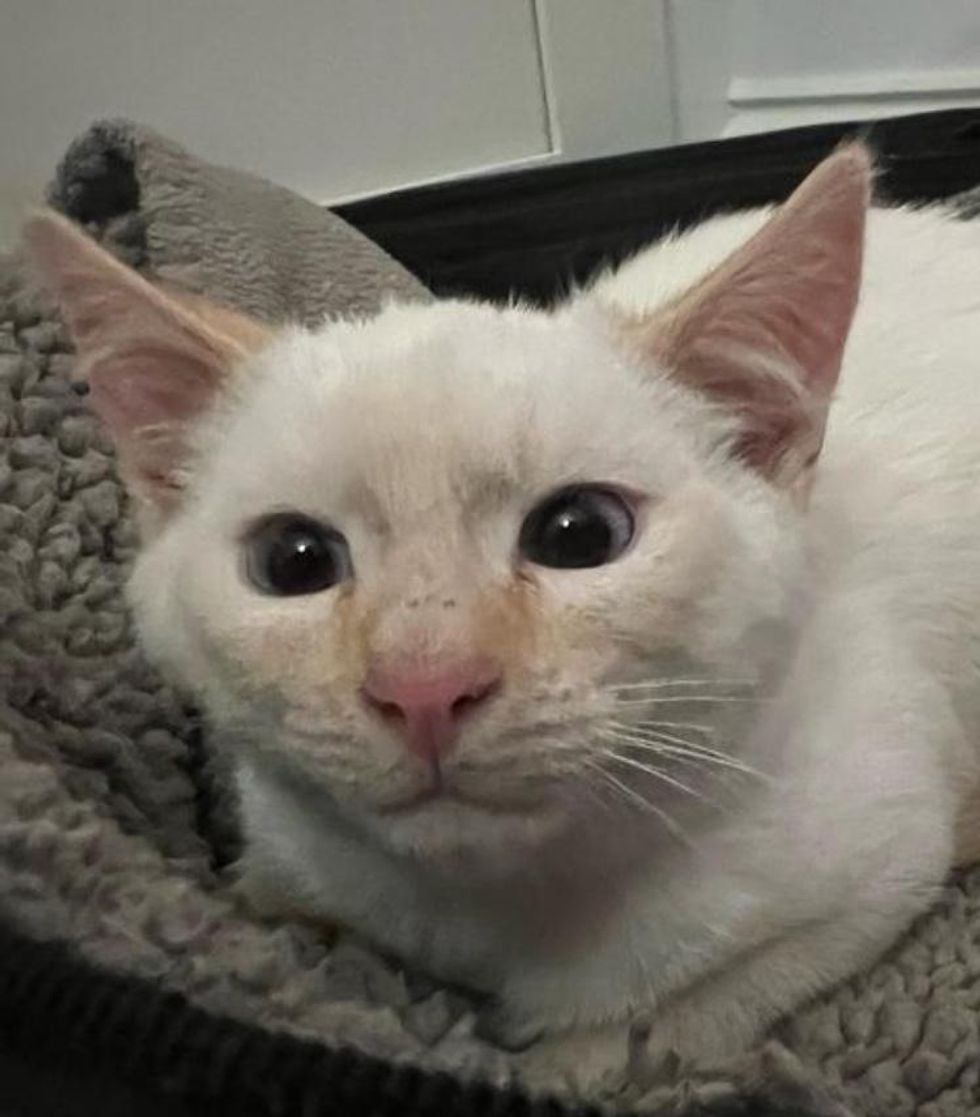 “He was a hider initially. I needed to make sure he was in the house and not missing.”

After about a week, Peppermint decided that he would no longer be wary of the new surroundings, and wanted to be closer to his people. “He moved onto hiding in between pillows instead, and would peek out for a treat.” 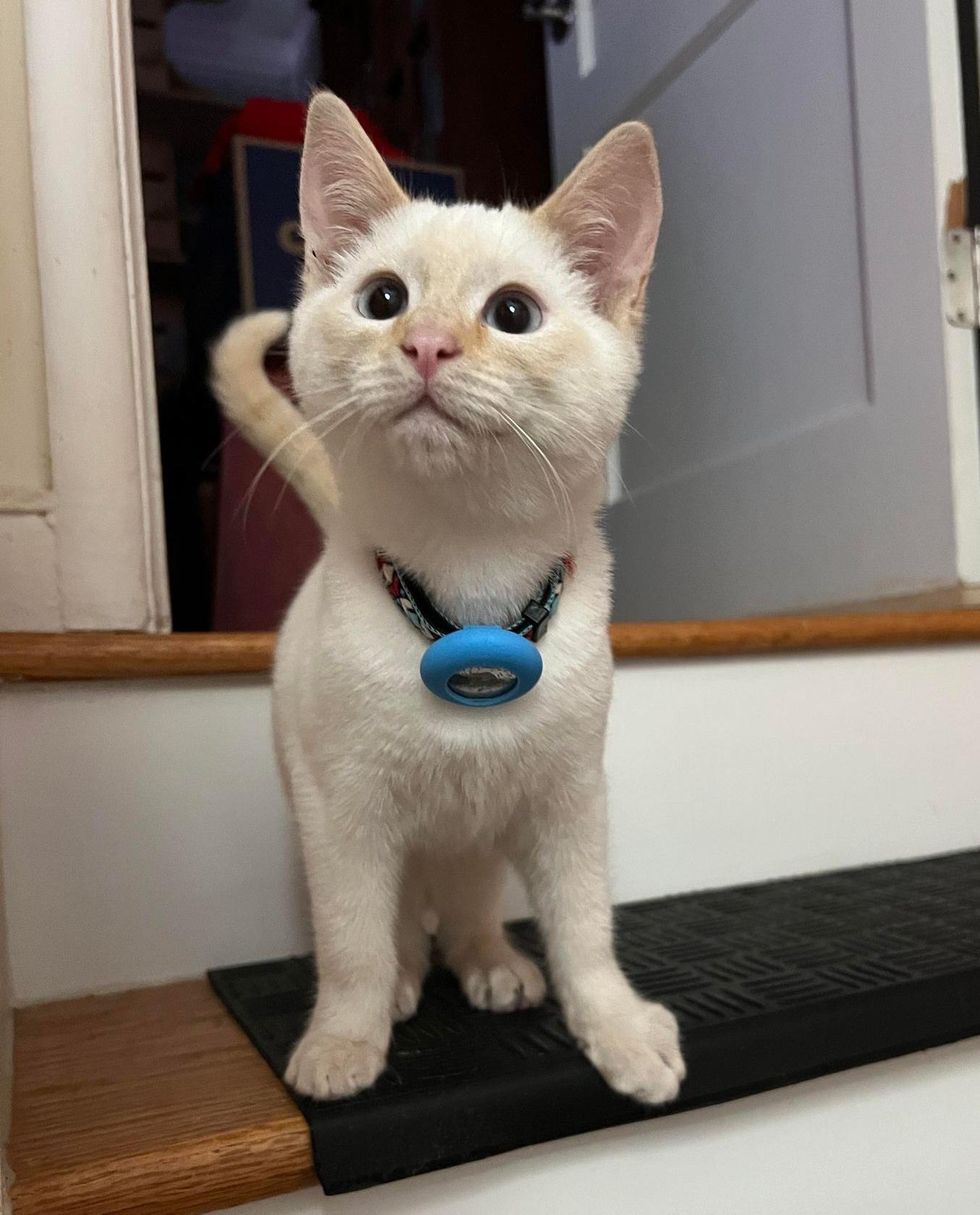 He kept finding new places to hide in the house, so Joyce gave him a pet tracker to ensure he was at homeJoyce @kangaroothekitty

Once he got a taste of the luxuries that come with indoor life — good food, comfy beds, and snuggles — he grew braver and started to play more.

“On Christmas night, he decided to do some zoomies on our bed for a good hour while we tried to sleep. Then he came to cuddle with me and my cat, Kanga,” Joyce shared with Love Meow. 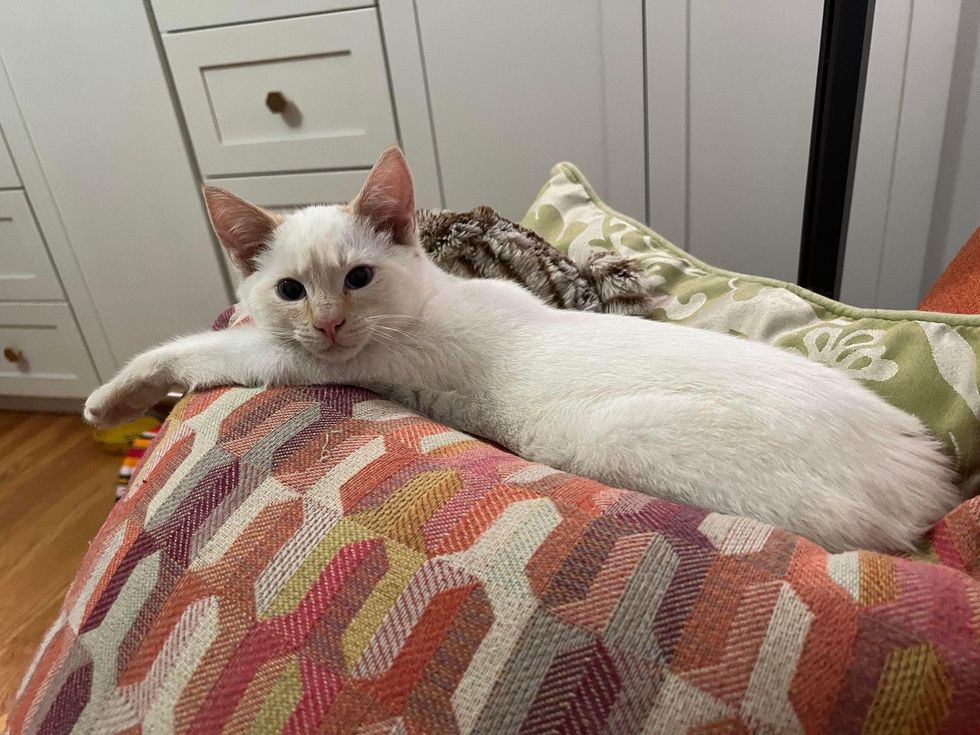 After a week in foster care, there’s no more hiding. Peppermint has found his courageJoyce @kangaroothekitty

Now, Peppermint will lounge on the pillows and come up to his people for attention. He likes to rub his face on their hands for head scritches and purr up a storm in the meantime.

Peppermint is content to have a roof over his head knowing he will never have to worry about food and shelter. 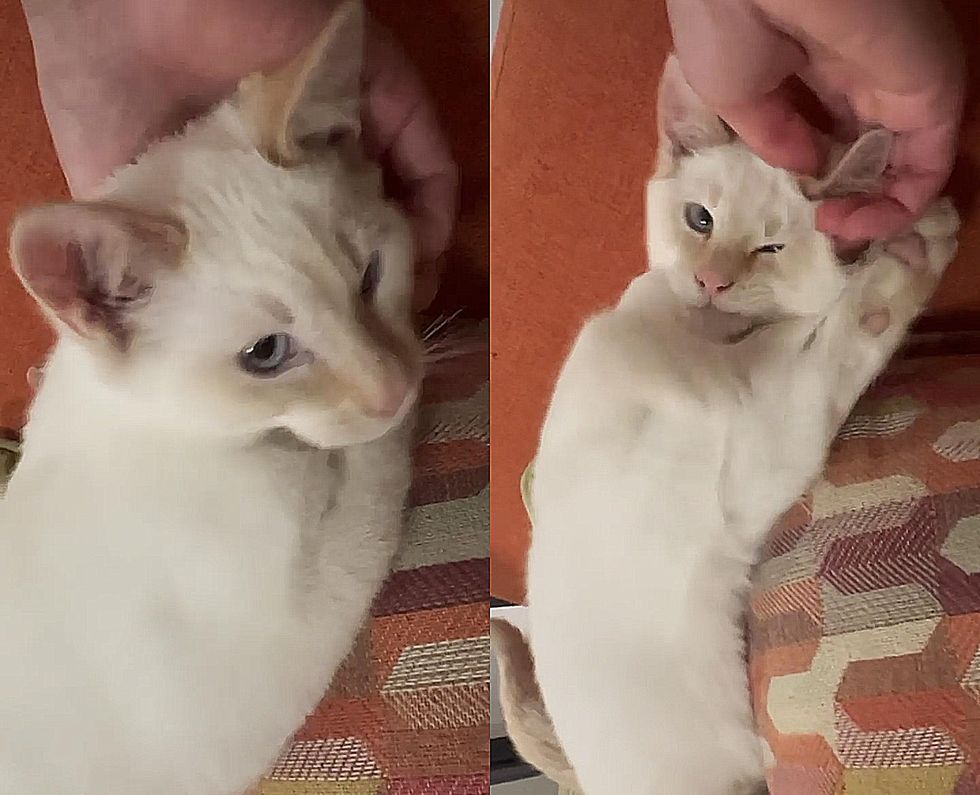 In less than two weeks, Peppermint has blossomed into an inquisitive, vocal cat. Despite being a little shy at times, he will seek attention from those he trusts, and soak up all the snuggles he can get.

With the help of the resident cats, Peppermint is coming out of his shell and loving every bit of his new life. 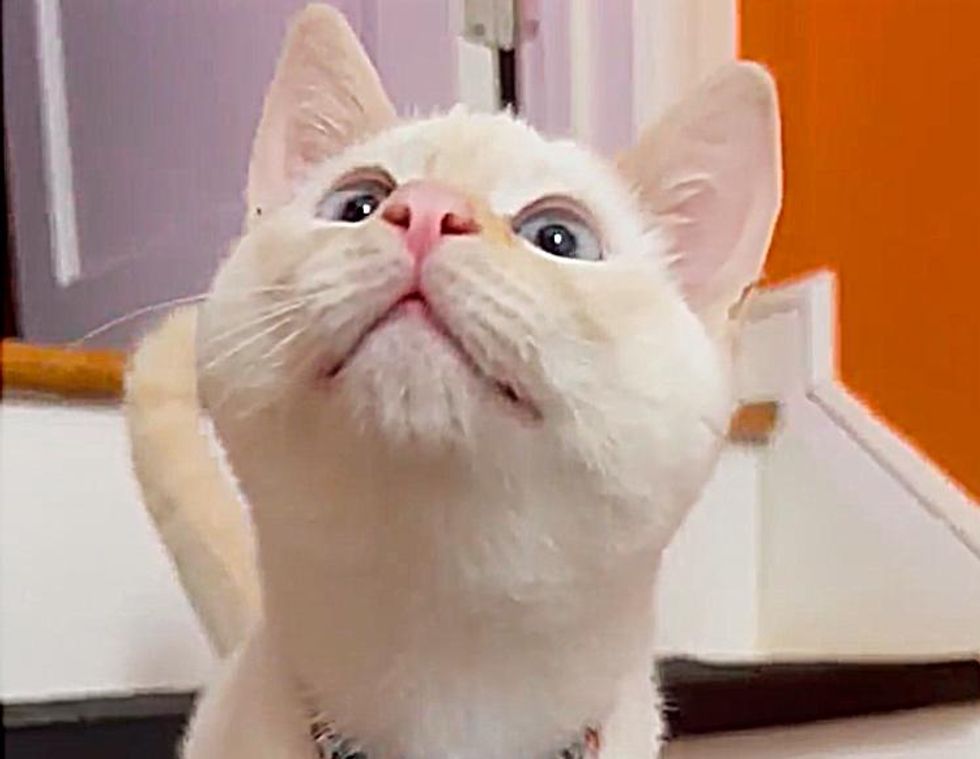 While he is getting ready for his forever home in January, they continue to keep an eye out for the rest of the cat family.

No one knows why Peppermint decided to stay and the others left, but he is thriving as an indoor cat, napping on his people’s bed and walking up to them whenever he wants to be petted. 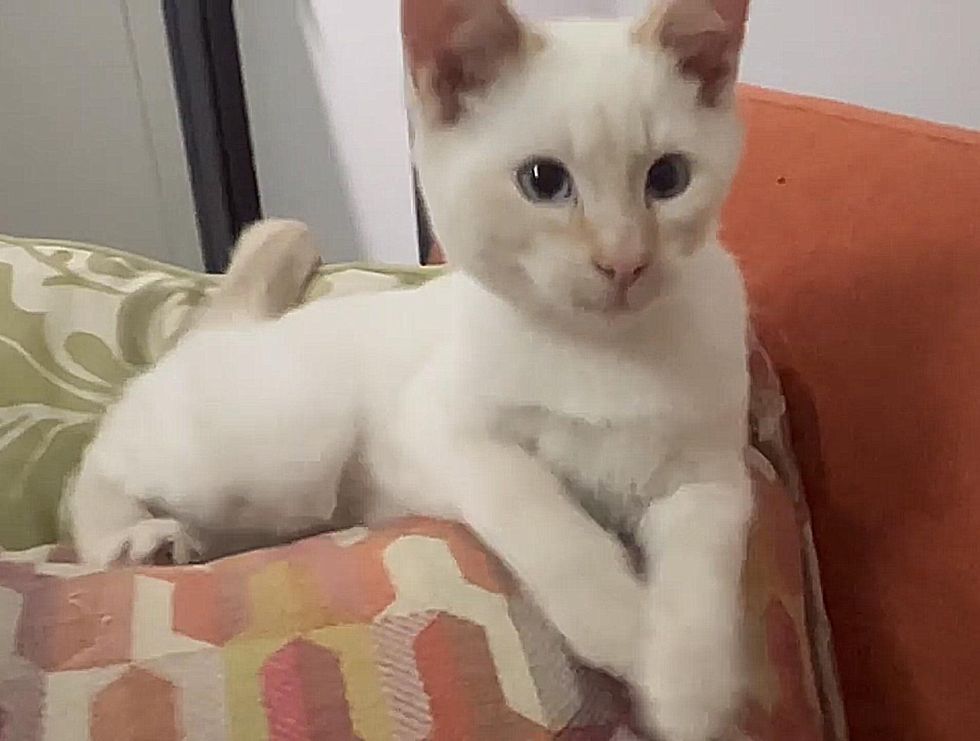 Can Cats Hold a Grudge?

Study Reveals Cat Owners Spend As Much As $45,000 During a Pet’s Lifetime

Signs Cats Are Your Spirit Animal