Kitten Sitting Outside a House Gets Help, Days Later Her Littermates Show Up in the Same Place

A kitten sitting outside a house got help. Days later, her littermates showed up in the same place.

A resident from Tampa, FL noticed a litter of kittens outside her house a few months ago. They would come and go as a clowder, but at the sight of people, they would run and hide.

Then one day, only one kitten was seen in the yard. The lone calico was sitting near the house and looking rather sickly. She was very lethargic and didn’t budge when she was approached.

The finder scooped her up and reached out to AnimalLuvr’s Dream Rescue for help. 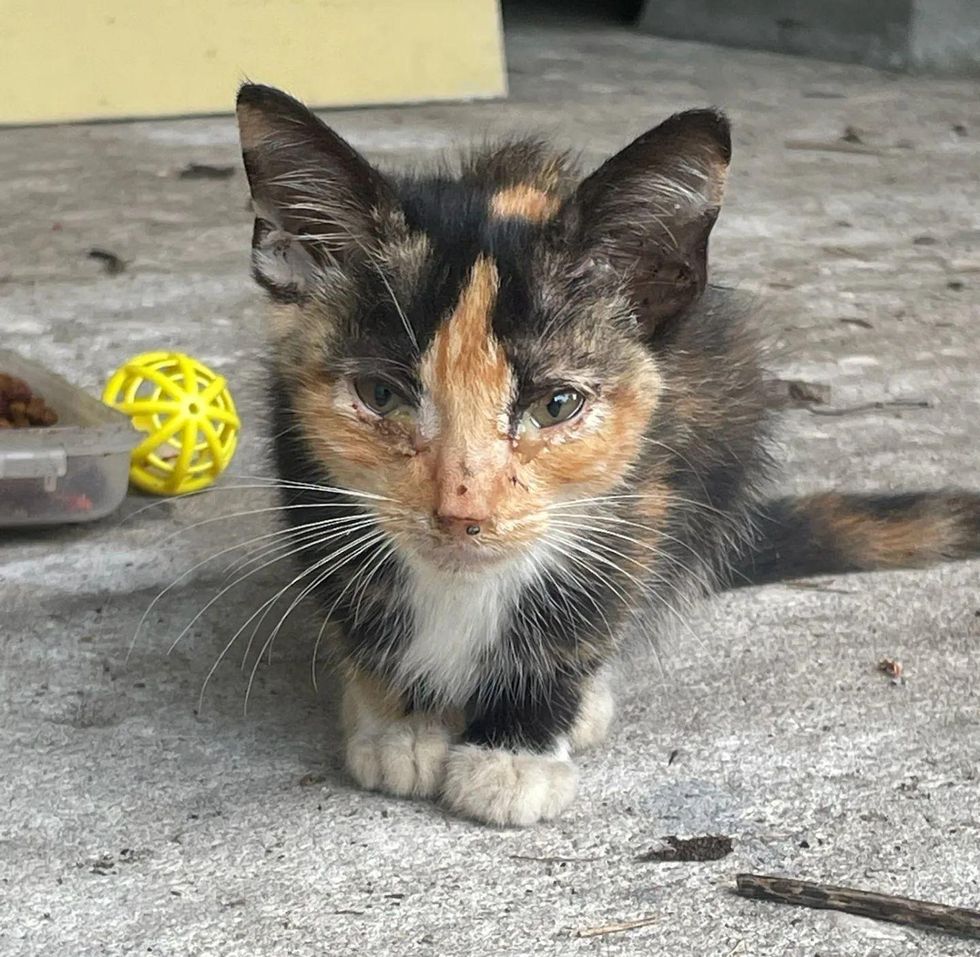 The calico named Natalie was seen in the yard alone one day@tiny.paws.fosters

The kitten named Natalie was immediately delivered to Nadija, a foster volunteer of the rescue. She was emaciated, weighting merely one pound at eight weeks old, and had an upper respiratory infection among other things.

“Despite it all, she couldn’t stop making ‘biscuits’ and purring,” Nadija told Love Meow. 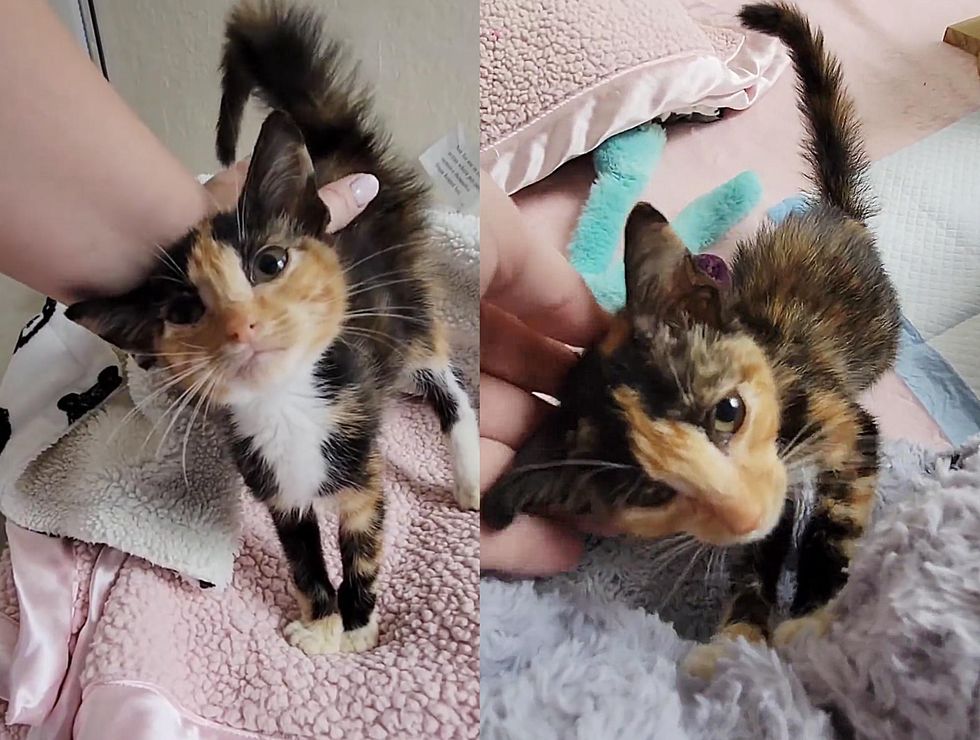 She felt so much better after getting all cleaned up, treated, and fed@tiny.paws.fosters

The calico was grateful to have a clean face, food in her tummy, and a warm bed to nestle in. She took a much-needed long nap to allow her scrawny, little body to heal.

After having several small meals and hours of sleep, she felt refreshed, satiated and curled up purring in her heated bed. 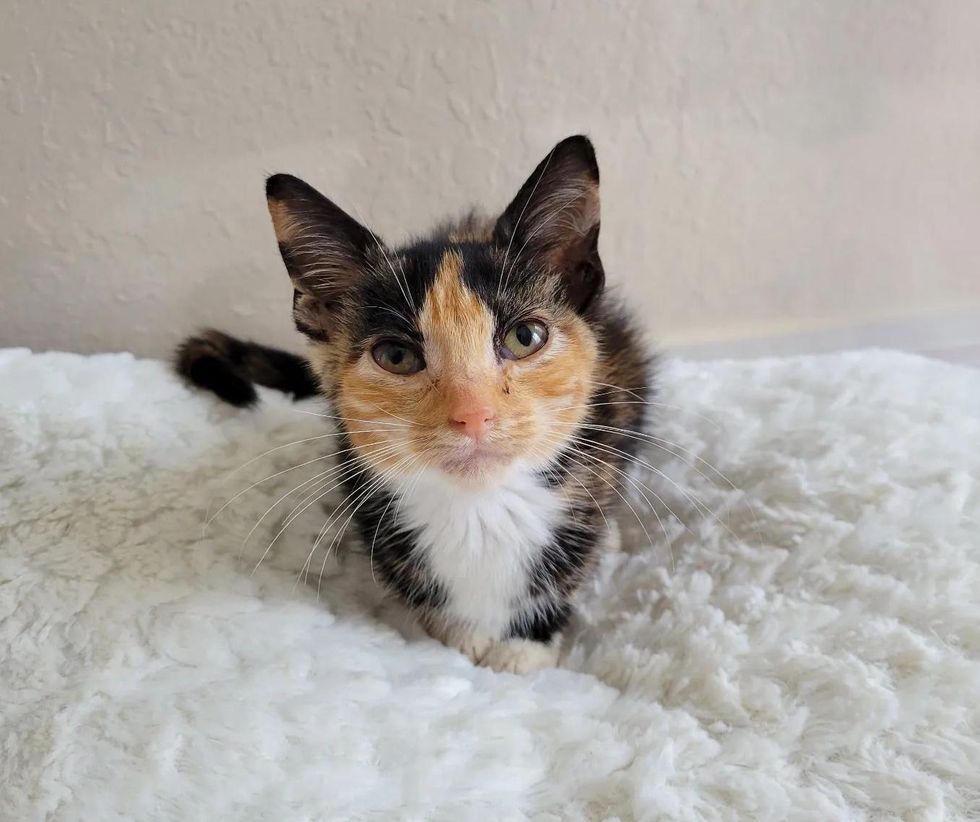 “A few days later, the finder called me back saying Natalie’s three siblings showed up. We wanted to get them into foster care as well.”

With the help of a few humane traps and smelly tuna, the remaining three kittens were brought to safety. After getting them cleaned and fixed up, they were due for a reunion with their calico sister. 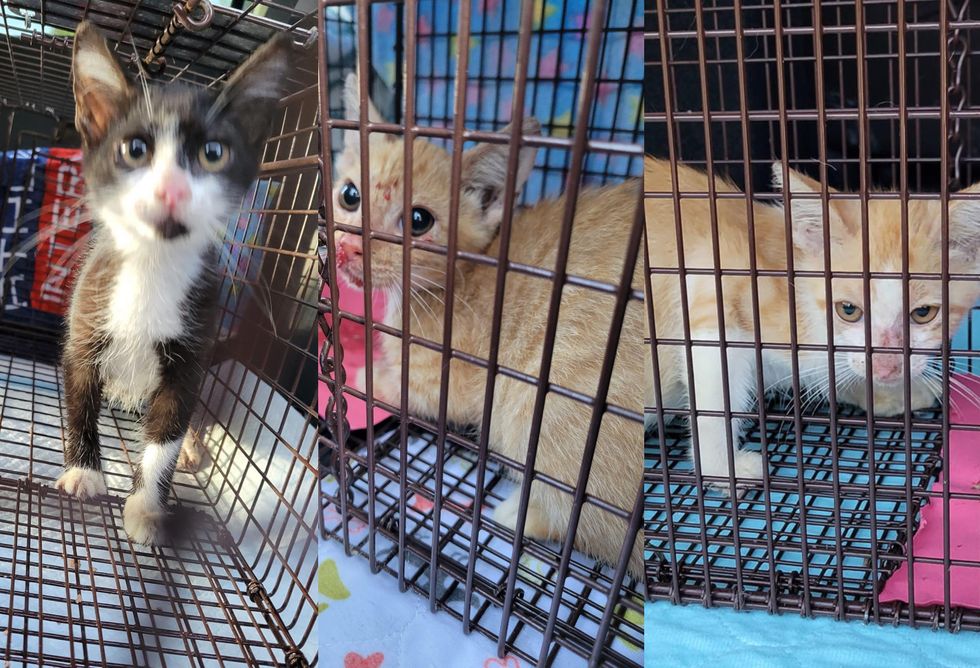 The trio (Richie, Carmy, and Sydney) instantly recognized Natalie and happily accepted her back into their crew. “Natalie immediately snuggled between them all, and they took a well deserved nap together.”

In the days that followed, they spent plenty of time cuddling in a purr-pile and did almost everything as a cute foursome. 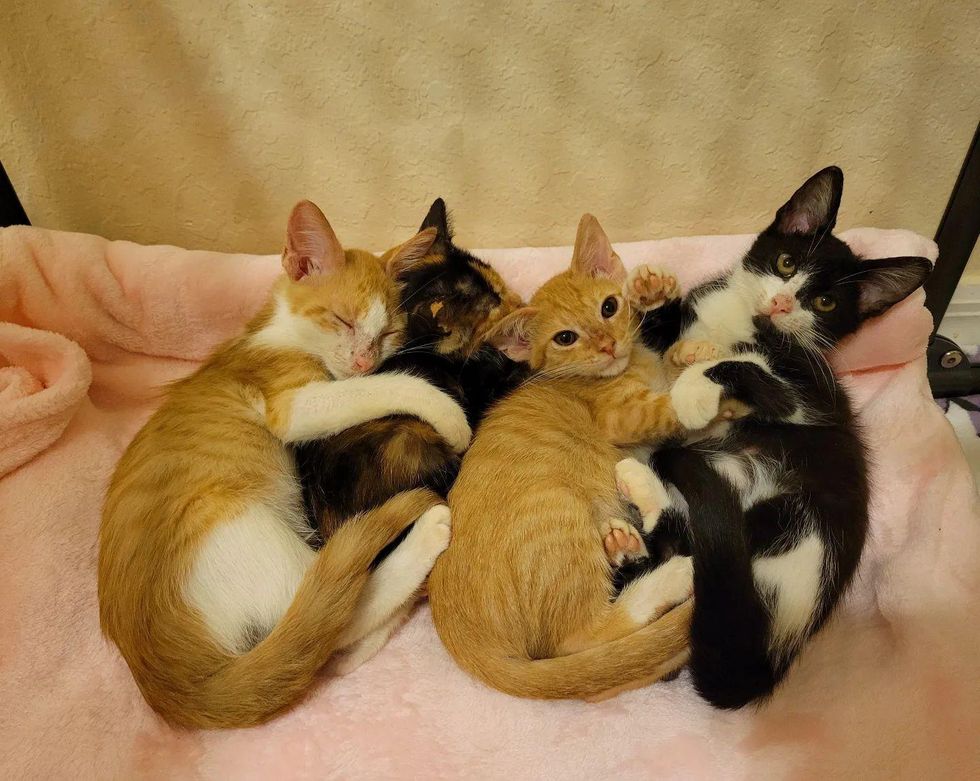 All four kittens were reunited in the comfort of their foster home@tiny.paws.fosters

Natalie was much smaller than her siblings but the snuggliest of the bunch.

As they recovered and regained their boisterous kitten energy, they began scampering around the room, wrestling with each other, and climbing anything they could lay their paws on.. 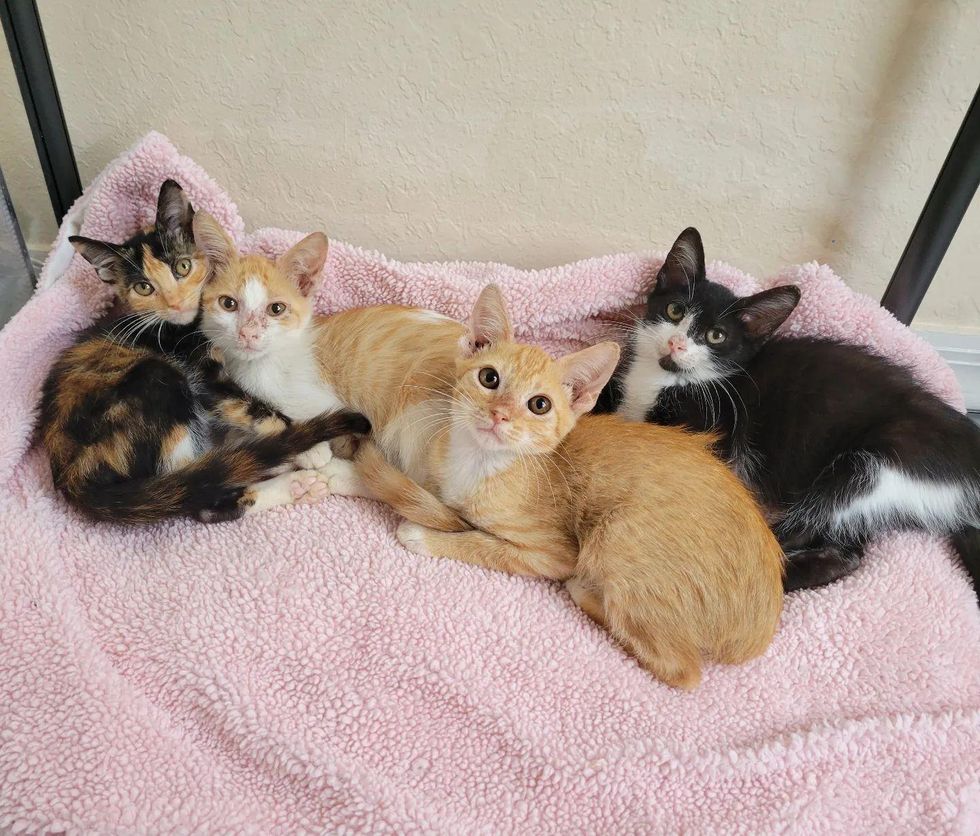 Natalie quickly blossomed into a social butterfly. Her little paws were constantly kneading in bliss, and she would leap into a warm lap any chance she got.

Richie is the biggest and most outgoing of the four. 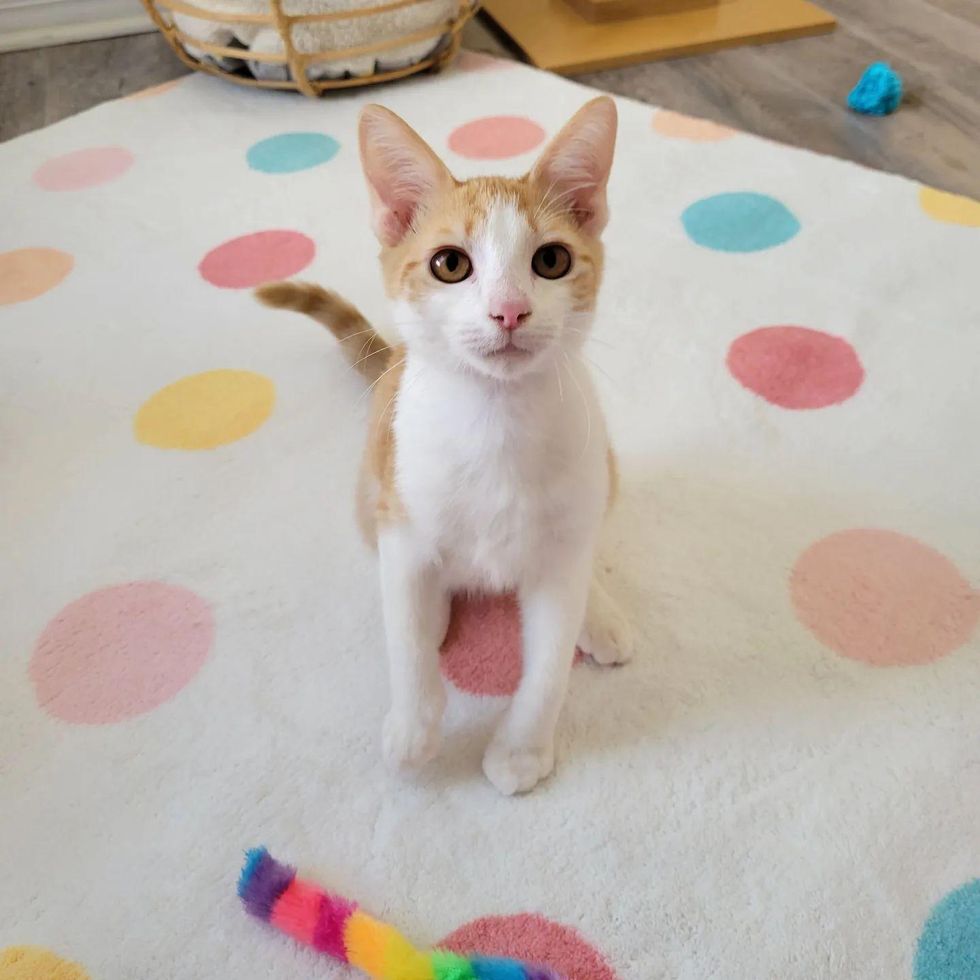 “The second Richie sees you, he starts making biscuits regardless if he is walking, laying down, or in mid-nap. He will also meow or chirp when he sees you in excitement,” Nadija added.

“Carmy is a gentle and sweet little guy that loves back scratches and immediately lifts his booty in the area.” 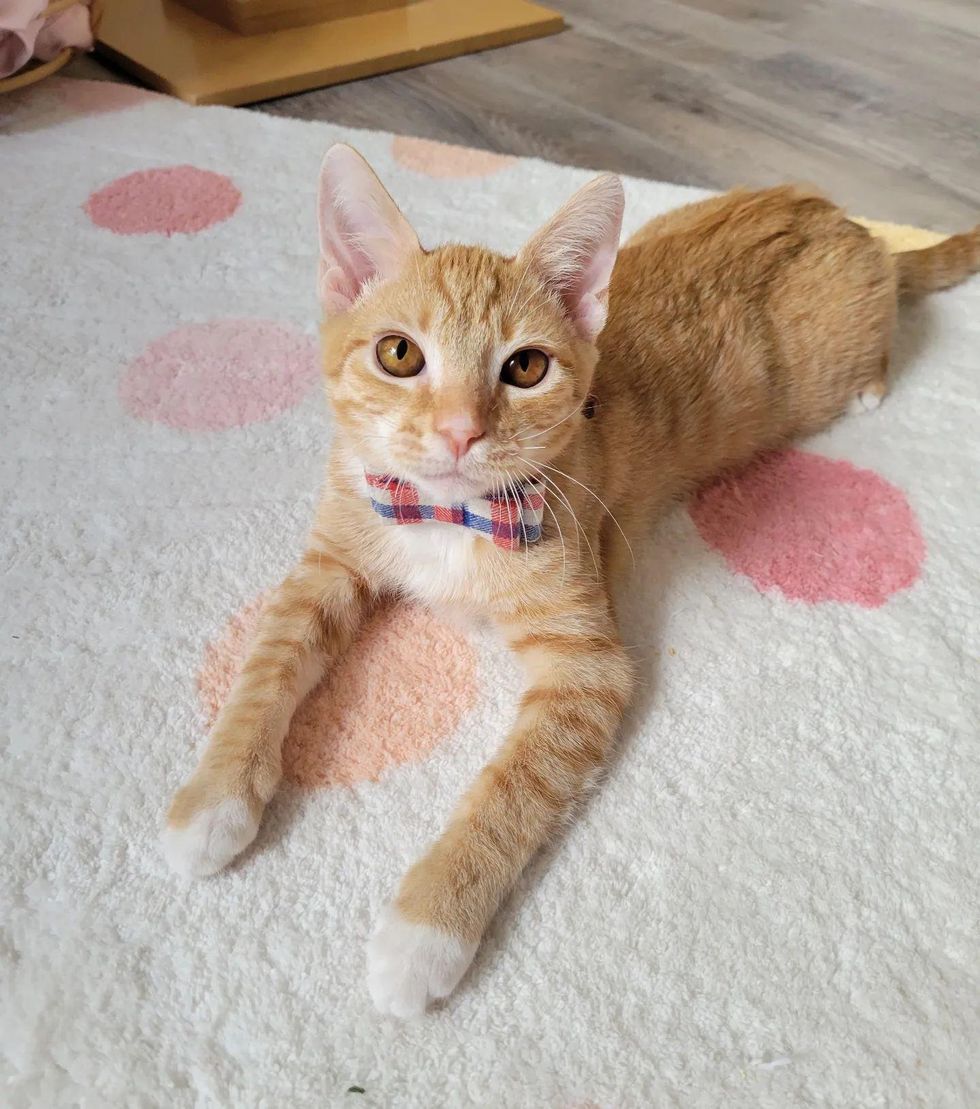 Carmy adores his brother Richie and follows him around the house like his shadow. He is often seen wrapping his tail around him when they walk side by side. 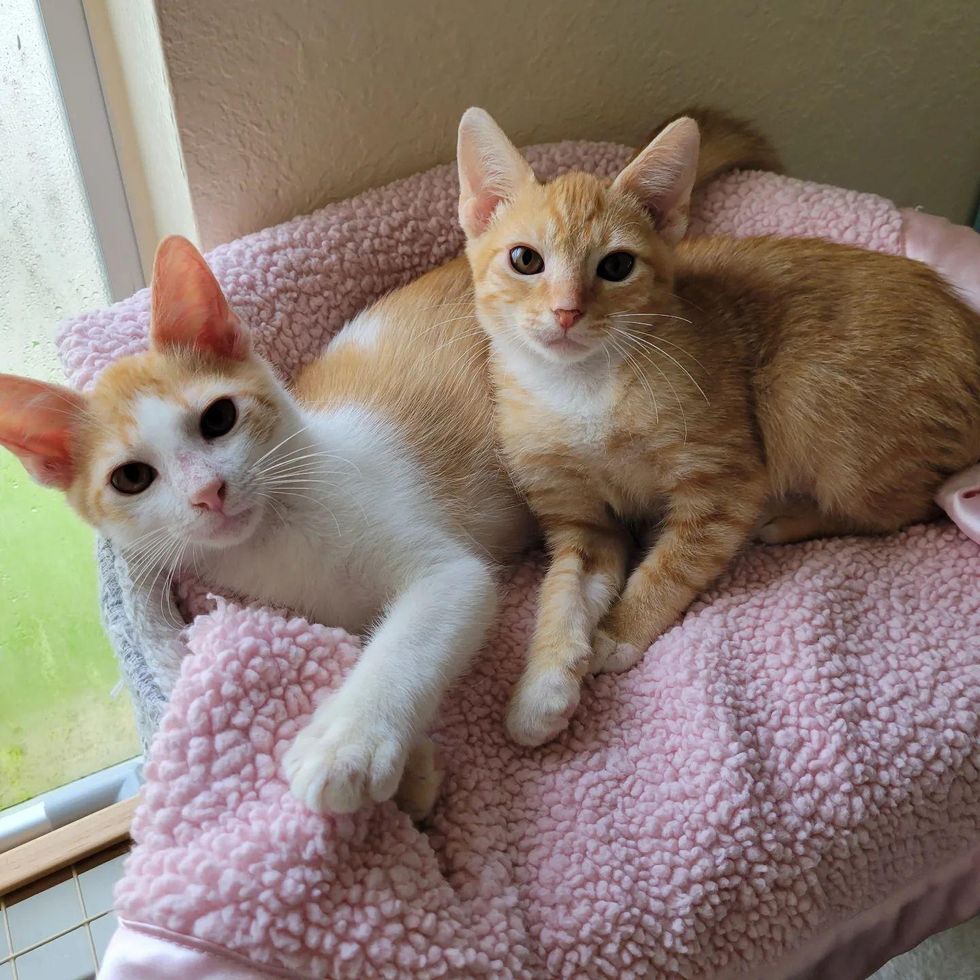 “Sydney is a gentle soul that loves snuggles, back scratches and even belly rubs, all while purring nonstop. When she’s not playing, you can find her burrowed underneath a blanket snoozing away.” 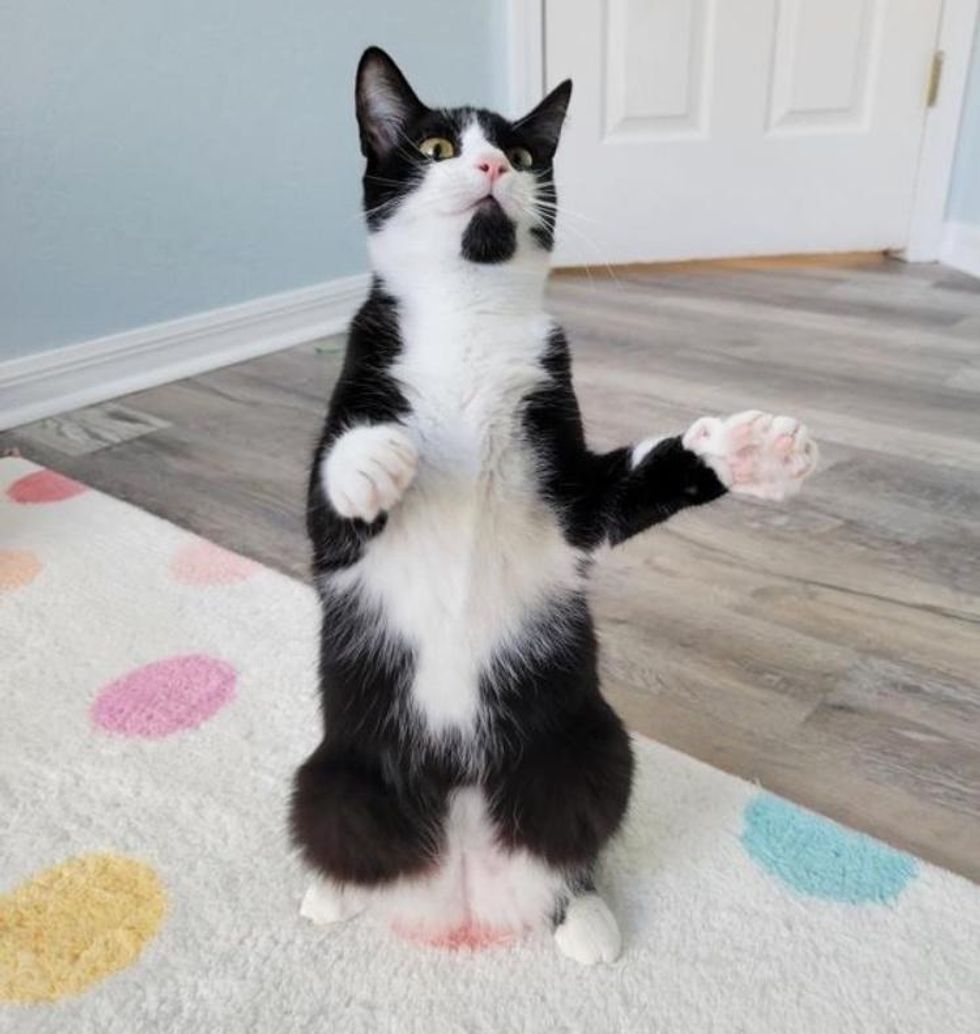 After a rough start braving the outdoors, they turned into beautiful young cats in their foster home, and were ready to search for their happily-ever-after. 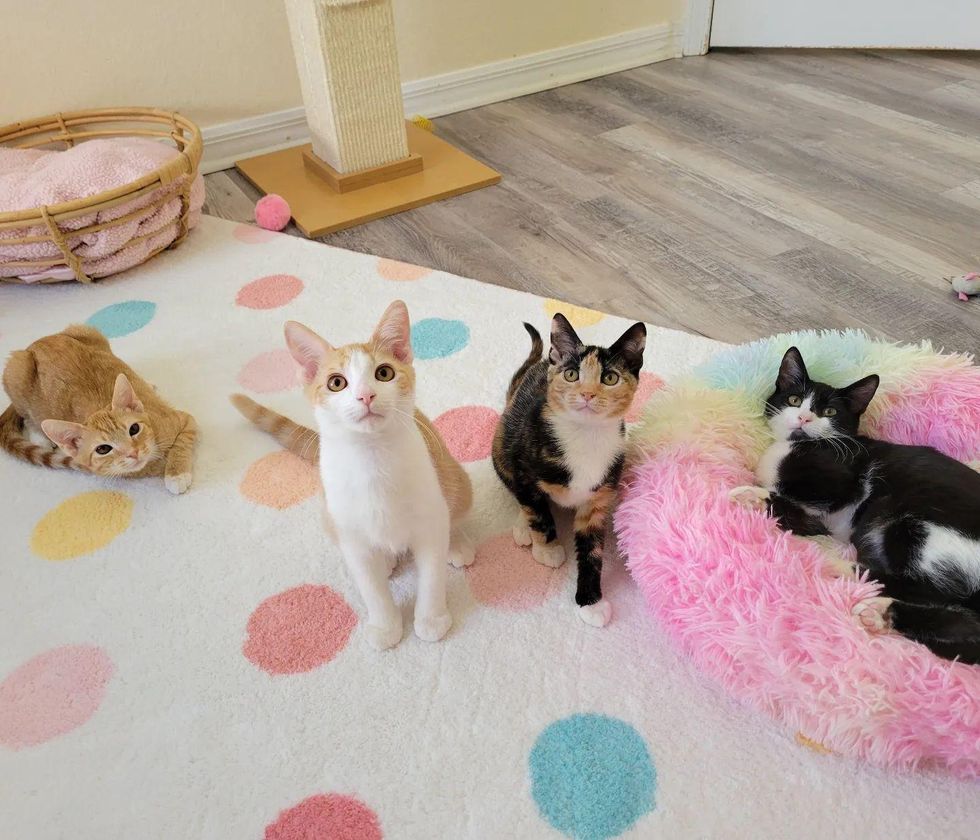 Natalie has found her forever home with another foster kitten, Archie, that she’d grown close to. They are now living the best life in her new home. 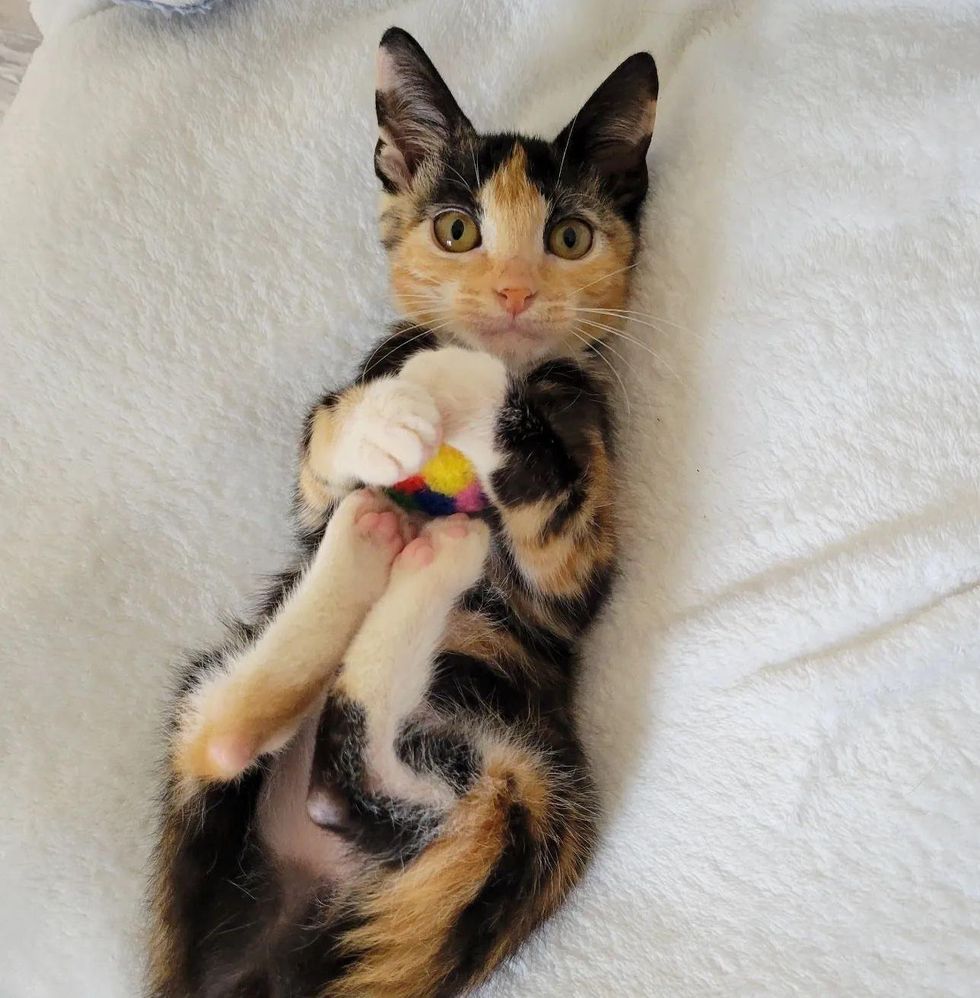 Sydney , Carmy and Richie are hoping someday their dream families will find them.

As for now, they are busy enjoying their indoor life with other feline friends, snuggling in cozy beds or running around, playing their hearts out. 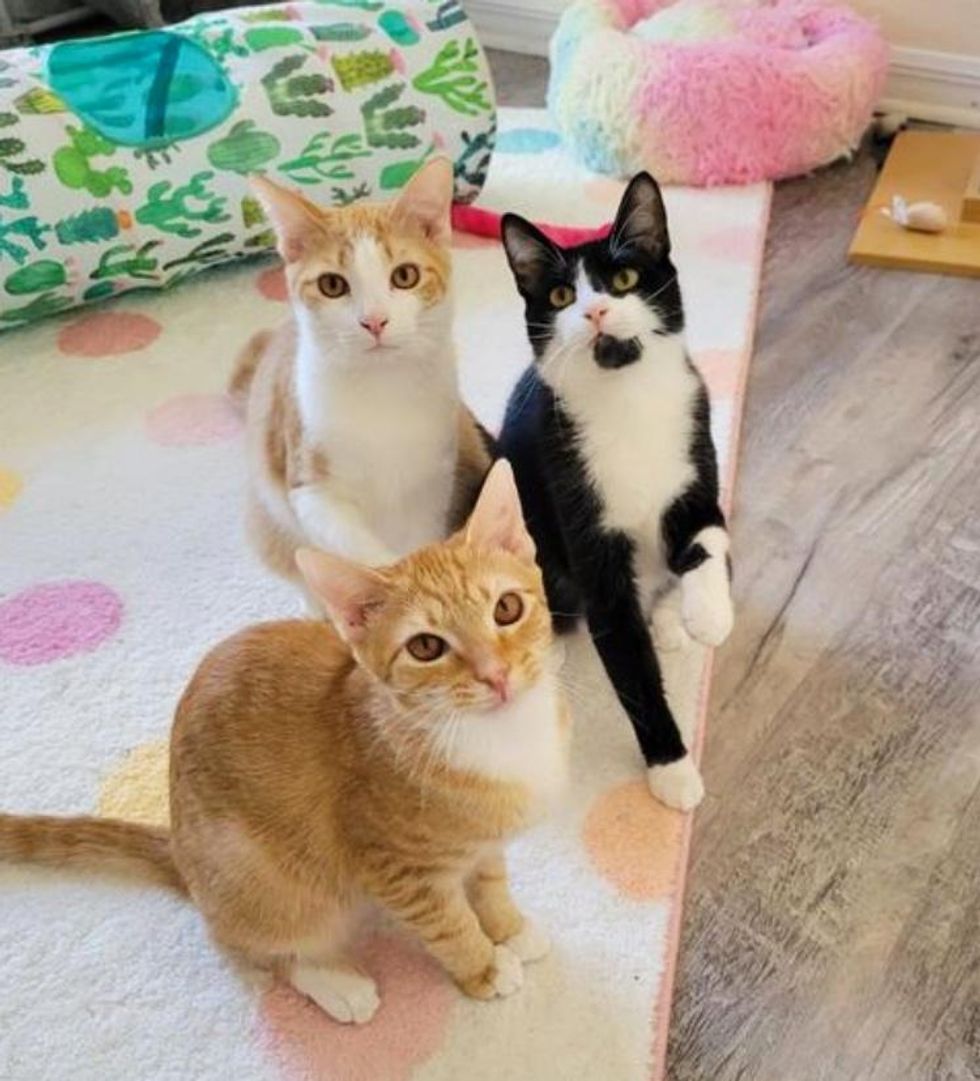 Related story: Couple Work Side by Side to Change the Life os a 4-day-old Kitten After Rescuing Him as an Orphan

Do Pets Get Seasonal Affective Disorder?

Cat Dental Care: How to Keep Your Cat’s Teeth and Gums Healthy

Cat Dental Care: How to Keep Your Cat's Teeth and Gums Healthy

What Sleeping Position Say About Your Cat